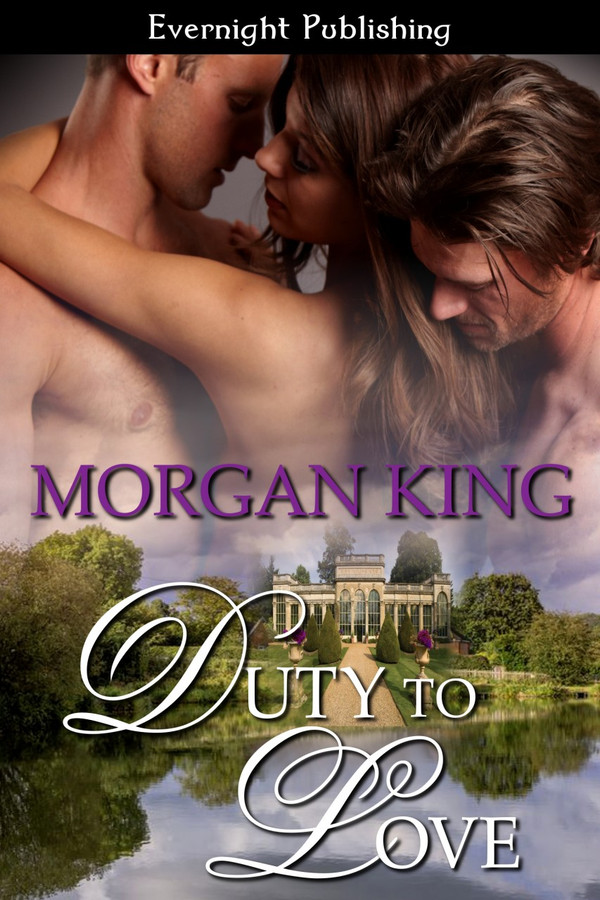 A craftily worded contract and fate finds Arthur, Earl of Hentonury, having to marry not the lady he expected but her younger sister Amelia, the woman he knows his brother James loves and hoped to marry. Arthur cares for both Amelia and James, so how can he choose between his love for them and his duty?

James may be the younger son, but he has taken leave from the army and will fight for Amelia.

Torn between her feelings for two brothers, Amelia wishes to marry Arthur but can't bear to lose James. Is there any chance the three of them can find happiness together? Will duty or love win out?

Arthur was in his study but not alone.

The two men must have sensed an intrusion, her approaching presence, for they turned to face her. Their faces became animated upon seeing her, giving smiles so similar she felt the weight of their combined warmth pulling an upwards movement from her own lips.

“James!” she uttered his name on a cry before racing forward and flinging herself into his arms. Unprepared his arms brushed her sides and hung around her back in a low, loose hold.

Sensing his discomfort Amelia shifted back to look at him, then turned to Arthur. Were they upset with her? Now she was to be married to him, was Arthur concerned that she might appear overly familiar with James?

She had thought James might be happy for her and Arthur. She would not be wedded to some stranger, moving to live far away; they could carry on, the three of them, friends as before.

Things weren't the same, though; faced with two men, tension stiffening their postures, expressions equally tight, Amelia realized she had been naive. Marrying Arthur might well mean the end of her friendship with James. They could no longer be frequently in each other’s company, completely at ease with each other, for she would belong to Arthur. A married woman was an entirely different prospect for a friend than a young girl running wild.

When Amelia had imagined James coming back from the Army and herself entering society, she had pictured them enjoying the season together, James, with his dashing good humor, providing light relief from the monotony of town entertainments. Now she would not be having a season, and James, while as dashing as ever, did not appear in good humor.

“I'm sorry, Arthur, I did not think. It's James. You know I would not be so improper with anyone else.” She took a step back from James, glancing at Arthur anxiously.

“Except me?” Arthur's tone sounded pointedly hopeful, and Amelia realized he was teasing her.

Amelia grinned. “Except you.” It used to be that James was the only one who teased her. Even when the three of them had larked around together Arthur had always been the voice of caution, unintentionally acting as a springboard to James and Amelia's rebellion.  Recently Arthur had begun to tease Amelia, and every time he did it added to the feeling of warmth that centered inside her when Arthur was near.

Had James noticed the changes in Arthur?

Amelia turned to look at James just as she felt him tug her back into his embrace. “Come here, you little hellion.”

This time he held her tight, her breasts pressed flush to his chest and his hands cupping her hips. For all their previous play together Amelia had never been held like this before. It was no casual embrace; it seemed full of intent.

Amelia only realized James' s intent when he leaned down and guided his lips to hers. The initial pressure was fairytale light, unexpected, and led to everything she'd hoped a kiss could be.

It was teasing, playful; his lips glided against hers in subtle movements, retreating then advancing into firmer contact. There was a little nip of teeth and a quick taste with the tip of his tongue.

Amelia let herself be kissed, and she reveled in the flurry of sensations her lips were experiencing. Greedy for more she let her hands roam freely over James's back, tracing the shape of his muscles, over his powerful shoulders to the unclothed skin of his nape.

James's hands tightened on her, pulling her closer, until their hips pressed as close as their chests. Amelia felt breathless, heady. It was a novel sensation. She'd never been one for allowing her corset to be laced too tight. She'd never imagined Arthur could make her feel like fainting.

If you love a steamy historical then you need to pick this one up. Morgan King is an author to watch out for. She completely captivated me with her debut novel and I found it impossible to put it down, until I reached the end. It left me sniffing in a good way. Sexy, and emotional this has everything I look for in a good story. I will be looking out for more from this author.

Duty to Love is a well written, sexy story by debut author Morgan King. Historicals are not my genre of choice, however I couldn&#039;t put this one down! Ms. King has a wonderful way of sweeping the reader into her tale of love and lust. Ms. King teases the reader by building the chemistry between Arthur, Amelia and James culminating in a very sexy and tasteful ménage scene. I&#039;m looking forward to more from this talented author!