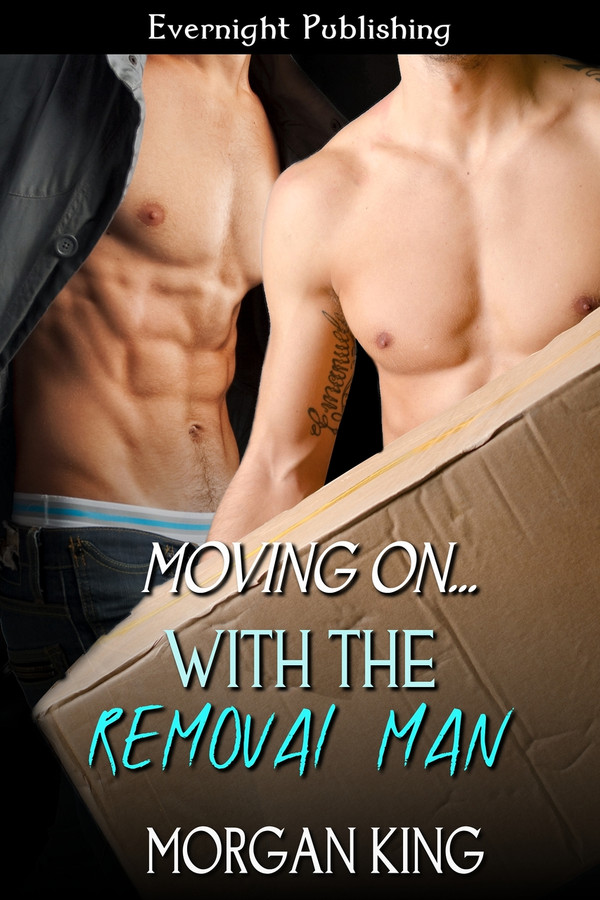 When Drew opens the door to the removal man coming to collect his ex’s furniture the last thing he expects is to fall instantly in lust, but that is undeniably what happens.

The attraction is mutual.

For Andy, the feelings inspired in him by Drew are overwhelming and he finds himself acting out of character and unprofessionally. It’s certainly not every day that he kisses a customer in the back of his van.

After things get a little heated, both men wonder if they have a future together. Drew is worried he’s too old for Andy. Andy is worried Drew’s on the rebound. With Drew’s ex causing trouble, can these two men overcome their miscommunication and fears to transform lust into love?

Drew flung his eyes back open. Andy was watching him intently.

“I really want to kiss you, but I thought I ought to check first. I haven’t been able to take my eyes of you all morning, but I wasn’t sure if you’d want…”

Drew didn’t know what he wanted when it came to a new desk or his life in general, but right at this moment he wanted nothing more than to kiss, and be kissed by, Andy. He shifted his butt back so he was steady and reached an arm up to wrap a hand around the back of Andy’s head. His fingers slid through the points of Andy’s short hair. He could feel the strands standing on end. He pulled gently, and Andy fell into him.

Warm, soft lips met his. Andy’s hand rested on his chest, his weight making the moment seem more real. Having a beautiful young man in his arms could otherwise be a dream.

A very beautiful dream that Drew was determined to savor.

He absorbed the feel of another pair of lips against his own. A sacred meeting place. Despite having asked if he could kiss him Andy didn’t do more than keep his lips resting against Drew’s. That was quite all right. Drew had enough experience to enjoy being in control. He was just a little out of practice that was all. Right now he might not be steady enough to be able to balance a pen on his finger, but he could still remember how to kiss.

Telling the voice in his head to shut up Drew parted his lips and snuck his tongue out. Gently and leisurely, he traced the plump bottom lip and top bow of Andy’s mouth, his care rewarded with a gasp from Andy.

Drew relished every second it took to push his tongue through the gap and into Andy’s mouth, a moan rumbling in his own throat as he did so.

He stroked his tongue along Andy’s, and the other man pushed slowly back with his. There was no hurry, not even when their tongues were dueling, sliding back and forth against each other. The rush came from his body’s fast descent down the exhilarating slide of physical lust. All over his body was eager for action. Having stepped on to the slide and pushed off there was no way of stopping the ride. His body was no longer under his control. It was as if gravity was speeding him towards a plunge into water. One he knew was going to feel fucking fantastic, if a little scary until he resurfaced. He hoped Andy had joined the ride, his is nails digging into Drew’s chest suggested he might have done.

Some relationships just aren’t meant to be. In Drew and Mark’s case it’s even worse – Drew has felt his love to be one-sided for a while, but he couldn’t tear himself away. When Mark finally leaves, taking most of the furniture, Drew feels bereft, but he isn’t devastated. That is probably the reason why the very attractive, and much younger removal man, Andy, catches his attention so quickly. Emotionally, Drew is ready to move on, but he and Andy have a few issues to deal with first. In a story that is true to life, touching, and very hot, ‘With the Removal Man” shows how virtual strangers can sometimes hit it off better than men who have lived together for years. Drew may be ready to admit it is time to let go of Mark, but his self-confidence is not where it used to be, and he is a lot older now than when he first got together with his now-ex. He quickly finds out that falling in lust with the hot removal man is easy, but even though he has been disappointed by love, he doesn’t want a one-night stand. He wants more from Andy, but his age may be in the way. It was clear to me that was the least of his problems, but it took Drew a little longer to figure it out. Andy falls for Drew with frightening speed, but he isn’t blinded enough to overlook the potential issues. Nasty ex-boyfriend who goes after Andy the first chance he has. Drew possibly on the rebound. An age difference that makes Andy wonder if he can be enough for Drew. Despite all that, his feelings are intense and he is determined to give it a try. Ah, the optimism of youth! If you like stories about men who meet and fall in lust right away, if you want to watch two of them work out the basis for a relationship outside of that lust, obstacles and all, and if you’re looking for an entertaining read that is funny and hot at the same time, then you might like this novella.