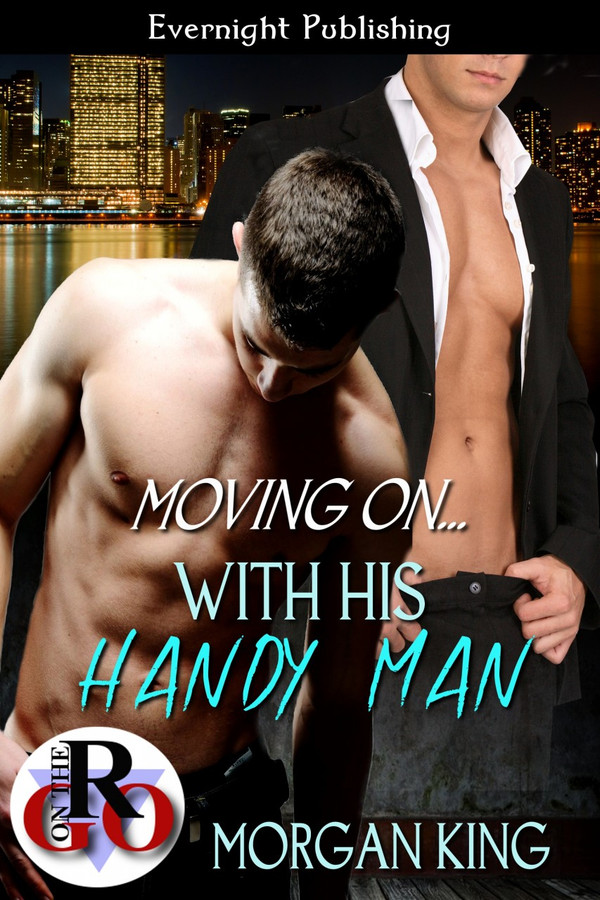 Tom is gutted when his business partner and ex- boyfriend Liam tells him he is seeing someone else. Tom and Liam’s relationship has been over for more than year, but it is this news that convinces Tom it is time to move on with his own life and he finally finds he courage to do something out of character: ask the handyman out.

Jax hasn’t tried to hide the fact that he’s smitten with Tom and he’s thrilled that Tom has finally put Liam to one side and is showing an interest in him. He’ll grab his chance to date Tom with both hands! However, he likes Tom enough to want to be more than just a rebound fling.

Can Tom truly let go off his feelings for Liam, and will Jax have a chance to win the battered and bruised heart of his boss?

“I don’t mind being the guy you experiment with, even if it’s rebound, even if it’s tit for tat with Liam for finding someone else, as long as that’s not all it is. I really like you, if that wasn’t obvious enough.” Jax said.

Tom gave a sigh of relief, “I really like you, too, and thank you for saying yes.”

“I’m sure it should be me thanking you. You are my superior after all. I’m just the handy man.”

Flirting, I can do this. “And a very fine handy man you are, too.” If he’d been typing Tom would have added a winking emoticon, but as it was he couldn’t pull the real thing off, so he’d just have to hope Jax got the message.

“Perhaps you’d let me thank you and demonstrate just how handy I am.” Jax walked towards Tom as he spoke, not just right up to the other side of the desk, but all around it, invading Tom’s personal space, so that Tom had to lean back to look up. That was until Jax got down on his knees in front of him.

Was Jax doing what Tom thought he was? Hoped he was? Was this how two people who weren’t dating had sex for the first time? Tom had always wondered how two people went from chatting to more. The first time for him and Liam had been after a great deal of build up. They’d been friends who had decided to take it one step further, and the act itself had been well planned. They’d also never had sex in the office before. Given they owned the building it had always struck Tom as a tragedy.

Tom’s mind might not be up to speed with how quickly Jax was moving, but his cock certainly was. It was pumped up and ready to go, pushing against his slacks and trying to get his attention.

It appeared to have Jax’s attention. He reached one hand out to caress Tom’s cock through the silky material. “A good workman needs good tools, and this one feels like it might just suit me.” With heart-pounding slowness, at least in Tom’s body, Jax pulled down Tom’s zipper. Tom’s cock surged forward for one brief moment, but remained restrained by his cotton underwear.

“Here, wait a minute,” Tom said, and then when Jax instantly shifted back, a look of hurt rejection in his eyes, he went on. “No, I don’t want you to stop, I just thought it’d be easier if I…” He leaned his hips up and shimmied his trousers and trunks over his hips, down to mid-thigh, demonstrating his intention before resting his naked butt back on the cool leather of the seat.

There was no way he wanted Jax to stop.

“Ah well, that does make my job easier.”

Jax grinned up at Tom, flashing his sexier than any one man deserved to have dimples. He knelt just looking at Tom’s cock for what felt like an eternity to Tom, every second marked by the pulse throbbing through the long vein running down the underside of his cock, and an increase in size, centimetre by centimetre. If his penis hadn’t measured just over nine inches from root to tip he might have been getting an inferiority complex.

Short, sweet, and to the point, &quot;Moving On With his Handyman&quot; is a great little story. Liam and Tom were business partners as well as lovers. Liam left poor Tom, and even though they still ran the business together, Tom has a very difficult time getting to the point where he&#039;s comfortable enough to ask Jax, the sexy handyman, on a date. Jax likes Tom too, and when they decide to go out, Jax takes things...ahem...in hand (Maybe his mouth as well? Hehe!). This is a nice little story. It&#039;s short. I think it took me an hour or so to finish it, but it was a very good hour. The men share a great chemistry, and the sex is very hot. However, it&#039;s also romantic. Tom realizes that he needs a change, and Jax helps him along. I highly recommend this one. Good job, Morgan King!

I liked this story a lot. It’s sweet, warm, and kind-hearted. There was nothing not to like, except maybe for wanting it to be longer. And for hating the ex, Liam, with a vengeance. What a prick! Tom and his ex, Liam, work together. Liam left Tom a year ago, but they’re sort of friendly. Tom was crushed by the breakup, and it’s taken him a year to get up the courage to ask a gorgeous handyman, Jax, out. Tom and Jax work together, and there’s that pesky employer-employee risk. When Tom finally asks, things go from mild to super hot in a flash. Real dates are still ahead of them. But… Liam throws a wrench in their plans. There’s no complicated plot here, just a sweet getting to know each other. Tom is slowly waking from his shock of having been just convenient for Liam for nine years. Jax, on the other hand, has youth and determination on his side as he knows what he wants and goes after it. In fact, Jax takes a big risk, and is ultimately rewarded. And so does Tom. The storyline is about Tom and Jax getting to know one another, moving from tentative first steps into a relationship. Tom’s work is unsatisfying and he gets the chance to change things. Moving on from heartbreak isn’t easy, but I was glad Tom and Jax found their way together. Recommended read!