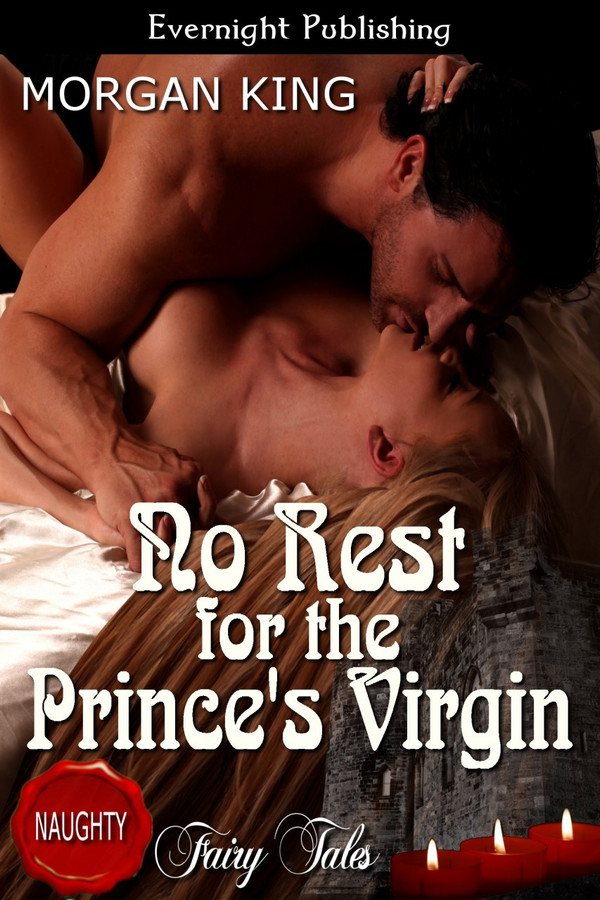 Ever wondered why the princess with a pea in her bed really couldn’t sleep? Wonder no more, in No Rest for the Prince’s Virgin you'll discover what the Prince was doing to keep her up all night…

Prince Wilhelm needs to marry, but cannot find a wife to suit. Then on the night of a storm Katrine is swept into his life like magic. He is determined to seduce this beautiful, lost, woman, using all his powers of seduction—including those in the bedroom.

Katrine is no princess and does not feel she deserves the Prince’s attentions. But her fear is not enough to stop her from falling head over heels in love, even though fate and jealous ladies conspire against them.

Will Katrine and Wilhelm overcome the difficulties they face in order to have a fairy tale ending?

Wilhelm could last a little longer, he told himself as he moved to the table by the side of the bed. From there he removed a lit candle from its holder, gently rotating his hand to help loosen the dark red wax pooling around the wick. Lifting it up he tilted it just enough that a drop of liquid wax fell through the air landing with a sharp sting on the inside of his forearm. He’d learnt from painful experience not to let it fall where hairs grew. From a slightly higher height he let another drop fall. This time the sting was less sharp. Perfect.

Moving a step closer to the bed he stretched his arm out so the lit candle was raised directly over Katrine’s stomach, the light from the flame casting a soft glow that rippled out around her belly button. Should he start somewhere less sensitive? He took a moment to consider, watching the rise and fall of her soft flesh, her breath even and methodical. Wilhelm loved having the power to decide his next move, especially with Katrine safe behind her blindfold.

As a prince he had never before felt omnipotent, as he did at this moment, granted the privilege of being Katrine’s lover and guide. He could afford some mercy. With only a step, being careful not to jerk the candle, he moved down making Katrine’s thigh his new focus. Mentally measuring the height to be sure the distance matched that during his experimentation on himself he let the first drop fall. The crimson wax was a beautiful splash across Katrine’s milk white skin.

An indrawn breath hissed through her teeth. “What are you doing to me?”

“Did I hurt you?” Wilhelm trusted Katrine to grasp the nuance of the question.

Wilhelm caused another bead of wax to fall. “Do you remember what to say if you want me to stop?”

“You don’t have to say a thing, just feel.” Wilhelm looked admiringly as his work so far then took in the rest of his canvas, still empty. “You’re going to be feeling an awful, or depending how you see it, a delightful, lot.” In a slow sweeping curve he swung his arm leaving a trail of red from thigh to lower right rib cage, the small dots cooling and turning hard quickly.

When the droplets stopped falling Katrine sighed a perfect sigh of pleasure. At least it was pitch-perfect to Wilhelm’s ears.

The pause opened the way for her to break her silence. “Do you remember when you lost your first set of teeth as a child?” It was a rhetorical question, and she gave Wilhelm no time to answer. “I do. I used to love it, the sensation of self-inflicted pain that you could keep testing. There was always the reassurance that you could never go too far, for your tooth would simply fall out if you did. I like this—it is the adult version.”

She was a delight, provoking Wilhelm to laugh openly. “I think your tooth might have come away long before my wax will run out.” He manoeuvred the candle so that a drop of wax fell onto the soft skin of her areola from a great height, smiling to himself at his accuracy.

Katrine let out a cry. Not so impudent now.

Any other plans Wilhelm had thought to indulge in were forgotten as he rained wax across her breasts, fast enough to kiss her skin with a sting but the drops too small to fall like hail. He needed her now. No more play. He needed to be skin to skin, feeling the hard patches of wax between them, not just seeing his mark but feeling the branding he had given his princess, as he buried himself inside her to the hilt.

With a short sharp puff of air, and a pinch to be sure, he extinguished the candle and tossed it aside, not caring where it landed. He climbed onto the bed, stalking up Katrine’s body like the powerful predator he was.

He stretched the length of his body out against hers, letting his weight press them into the mattress, wanting her unable to feel anything but him. He felt no need to ask if she was ready for him. She was splayed wide for both their pleasure, and he was going to take her.

Adjusting his hips and positioning his now throbbing cock, he slammed in, in one thrust.

Katrine’s silence scared Wilhelm. She nodded her head, but it wasn’t enough to reassure him. Shifting his weight to one arm he slipped his fingers under the blindfold and eased it from her head. She stared back at him with wide eyes, the bright green the merest rim around her dark dilated pupils.

“Are you still with me?” he asked.

She flung her arms over his shoulders, digging her fingernails into his skin and dragging them upwards scoring his flesh. He might have driven speech from her, but if that was her response it was no bad thing. “Hold on as tight as you like,” he said, withdrawing his hips and slamming them forward again. Not only did Katrine’s nails dig in tight, she lifted up as much as she was able—her ties having loosened somewhat—and pressed her mouth to his chest, sucking hard.

Wilhelm pounded, all measure of control lost, Katrine’s hips pushing back at him, spurring him on. He never took his eyes from hers. He would see her soul and, completely vulnerable himself, show her his.

This story was GOOD! Katrine and Wilhelm are likable characters that from the very beginning make you want their happily ever after. The writing itself is well done except for a few grammatical errors, but it flows nicely, has great suspenseful moments, and the dialog is genuine. My attention was grabbed and I ended up reading this in one sitting. The sexual tension and detail were well done, it was HOTT!........................................

Some of the Fairy Tale stories are good and some leave a lot to be desired. This story was GOOD! Katrine and Wilhelm are likable characters that from the very beginning make you want their happily ever after. The writing itself is well done except for a few grammatical errors, but it flows nicely, has great suspenseful moments, and the dialog is genuine. My attention was grabbed and I ended up reading this in one sitting. The sexual tension and detail were well done, it was HOTT! Very well done, I will be interested to see with Ms. King has for us next.