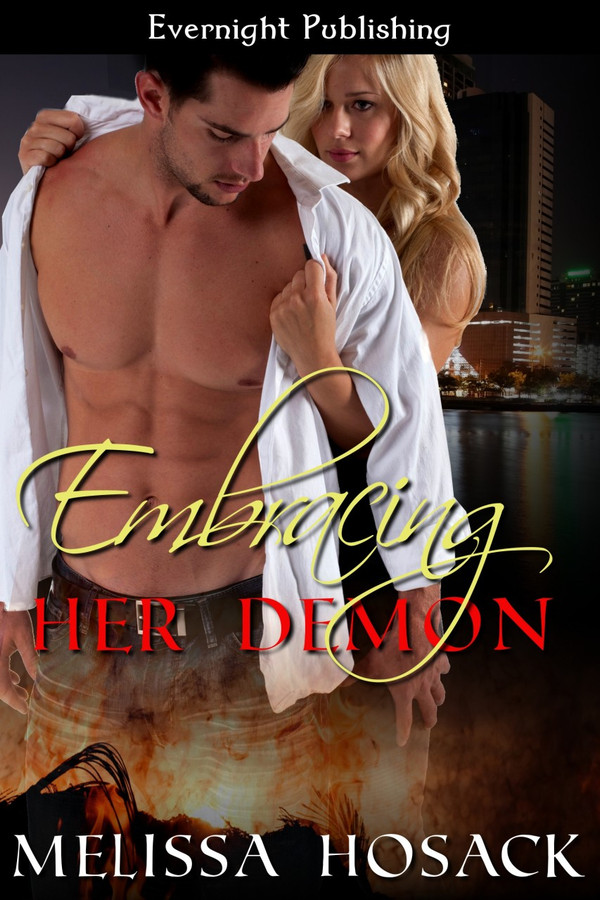 Overwhelmed with the pressure of being an emergency room doctor and distraught over a bad day, Chloe Daniels summons a demon to punish her for the loss of life at her hands. She expects a grotesque and evil being. What she gets is a hot blooded, sensual man who sees her for the good person she truly is.

Ballan, her demon, doles out the type of punishment he feels is required. With a table full of random kitchen items masking as sex toys, he shows her that not every situation is under her control. He uses deliciously wicked and depraved sex to drive this point home.

At the conclusion of their encounter, Chloe doesn’t feel abused. She feels sated and happy. It is impossible to deny that their connection goes way beyond mere sex. She realizes she could love this man. But as his nature attests, Ballan has darker secrets lurking. Can she learn to accept Ballan and the danger that comes with him? Or is the reality too frightening for her to handle?

“So now what?” she asked awkwardly, feeling thrown off by their setting.

Ballan smirked, then walked over to a closet. “Now I give you the punishment you deserve.” He slid the closet door open and began riffling around inside. “Climb onto the bed and kneel in front of the footboard, facing outward into the room.”

Chloe hesitated, but decided to just do as he instructed. She’d committed to this. After losing three lives in one day, she should be ashamed if she couldn’t handle the punishment Ballan planned to dole out. It was hers to take. She might as well jump fully onboard. Taking a deep breath, she crawled onto the bed. “This place is nice…for an evil lair.”

“Thanks.” Ballan suddenly appeared in front of her with a tie draped over his arm.

Chloe forgot all about how nice the place looked when she saw the tie, looking more ominous than it should have. “What is that for?”

He chuckled low in his throat. “You’re the one who volunteered for punishment, yet you get anxious over a simple, silk tie?”

“It’s not like I’ve ever been tortured before,” she said a little huffily as he grabbed one of her wrists and began looping the tie over it. “I’m not sure what to expect here.”

His skilled fingers swept over her wrists as he deftly bound them together. “That’s the beauty of it, now isn’t it?” Taking the extra length of tie, he tossed it over the canopy bar of the bed. He pulled on the silk fabric until he lifted her elbows even with her ears. Then he tied the end securely to the knots at her wrists.

Standing back, Ballan admired his handy work. “Beautiful,” he praised. There was a moment of silence in which he stared at her thoughtfully. Then he marched over to the tall nightstand next to the bed. Sweeping his arm across the top, Ballan dumped the table lamp and the few various items resting on the nightstand to the floor.

Chloe watched as best as she could over her shoulder, straining against the tie. A gasp escaped her when the lamp connected with the floor and shattered.

“That lamp is also coming out of your hide,” he informed her darkly.

Chloe shivered at the dangerous tone in his voice. She was embarrassed to admit it turned her on just as much as it frightened her.

EMBRACING HER DEMON is the erotic story of Chloe Daniels discovering that punishments can actually be quite enjoyable- especially when delivered by a sexy demon. When Chloe, a successful doctor, losses a few emergency room patients, she feels she needs to be punished. She jokingly reads a demon summons from a book belonging to her roommate. Chloe is shocked when an actual demon shows up in her home. But this demon, Ballan, is not the horned, ugly creature of myth that Chloe was expecting. I very much enjoyed the passion and the way the author used it as a release for bottled up emotions. I also enjoyed the small pieces of humor that the author cleverly weaved into the story. However, this story needs to be expanded. I had a hard time believing the relationship between the characters because of too many unanswered questions. Chloe and Ballan laughed about all of Chloe&#039;s preconceived notions about demons, but when she asked for clarification, there was rarely an answer. Despite her lack of knowledge and Ballan&#039;s hesitations to educate her, she is fully on board with jumping into a serious relationship. The common curse of the short story is that the plot has to quickly move along. Despite a rushed plot and not enough relationship development, the story was hot and humorous, which is a combination many authors cannot successfully write.