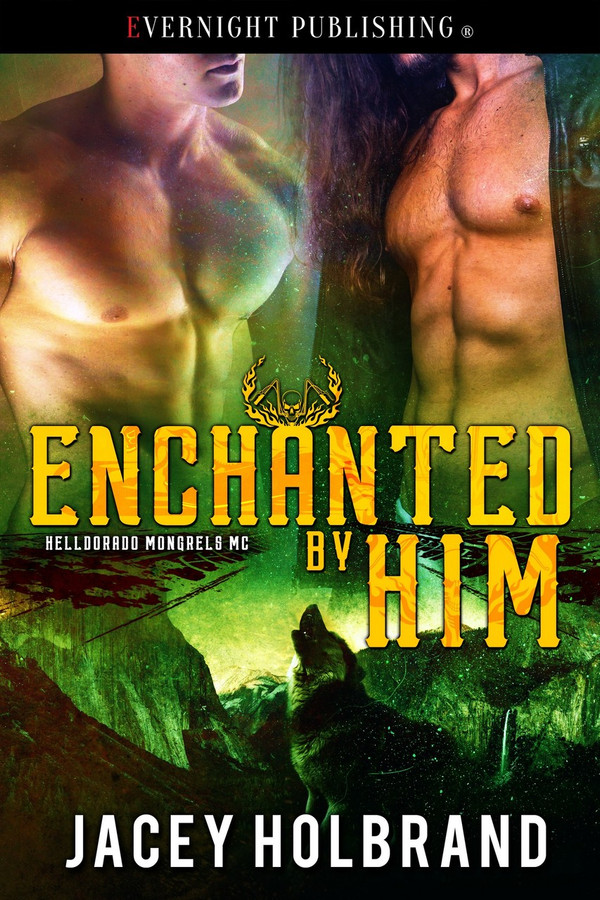 Helldorado Mongrels MC member, Sloth, is a man with secrets. He joined the club with a specific goal in mind, and when three visitors arrive, he fears one of them will turn his world upside down. Especially since that newcomer is a witch and his mate.

Shaman, the medic from the Skinwalkers MC, was hired to find the woman after the Mongrels’s gold and has secrets himself. When he meets Sloth, the man he knows is destined for him, Shaman begins to reconsider his evil, witchy ways, and his internal conflict irritates him.

Despite the constant clashing of their differences, passion ignites between the two men. But will their secrets cause betrayal and hurt? Destroying their relationship before it even has a chance to fully develop? Or will love ultimately triumph?

As he sputtered and his eyes watered, he spun away from the invisible partition and ran into the tall medic. The cowboy hat was gone, showing that the man sported long, jet black hair, drawn back into a ponytail. Memories of what his imagination had conjured up earlier flooded his mind and sent his cock twitching again. He had to fight an irresistible urge to drop to his knees before the man, unzip his black jeans, and take his shaft into his mouth.

Shaman chuckled, and once Sloth’s gaze connected with the medic’s gray-eyed gaze, Shaman lifted the corner of his mouth in a mischievous grin.

Sloth sucked in a stream of air as the man’s compelling and magnetic gaze held tight to his. Under the intense stare, Sloth’s body crackled and his joints hissed. The tingly sensations and odd sounds made him realize Shaman was stripping away all his cloaking spells. He tried to combat the psychic assault. His own powers weakened as Shaman continued to stare at him. All he had left was the mind block he’d put in place, and even that felt tenuous.

He attempted to step back and found he couldn’t move. Shaman had “frozen” him into place. Sloth thanked the Great Spirit he hadn’t actually been turned into an ice pop. He hated wintery cold temperatures. On top of it all, without the magic that’d been surrounding him for so long, he felt completely bare and exposed.

Again, Shaman offered a short laugh, this time snapping his fingers as well.

Sloth’s clothes disappeared. Not a stitch of fabric remained on him. To his dismay, he truly was naked. And traitor that it was, his hard cock stood at attention.

Who needs mind reading when my erection gives my thoughts away?

The medic strolled around him, seeming to appraise him like a stud at market. The man swept his fingers and hand over Sloth’s arm, buttocks, and the dip created by his spine at the top of his ass crack, making approving murmurs as he did so. Shaman came to stand in front of him and stroked his hand down Sloth’s chest to his cock.

He didn’t know how it was possible he could be rendered into a state of statue-like material, but still be able to perceive each brush of Shaman’s fingers and palm, the nuances of the man’s gentle touches and lingering caresses. Sloth would have sighed and swooned had he been able to.

“You know, perhaps I won’t kill you and consume your powers.” The medic looked up from Sloth’s cock and stared at his face. He raised a brow. “I see the shock in your eyes. Your gaze gives away everything you’re thinking.” His tone dripped of disapproval. “I’m a true skinwalker. Do you think being a mate matters to one of my kind? We crave power. Always need more. Doesn’t matter who, what, where, when, or how we get it as long as we amass as much as possible.”

Dread filled Sloth. His mate had considered killing him? Murdering him for skills he could barely use anymore himself? He wished he could close his eyes, block out the sight of Shaman, and be able to focus on clearing his head.

So much for the fairy tale euphoria of meeting one’s true love, feeling that instant connection, knowing there’s no one else who would love him unconditionally, and having the insatiable need to be with that someone.

Instead, he had confusion, despair, and panic about being tied to someone who might kill him in his sleep. Yet, he still couldn’t help being super attracted to the witch and wanting to fuck him—hard and fast or slow and easy. Didn’t matter to him how. As long as they got inside each other. And the fact that he craved to be physical with the skinwalker scared him even more.

“But then,” Shaman continued, “the pull I feel toward you is inexplicable. The thought of you no longer walking the earth pains me in a way I’ve never felt before and worsens with the idea of my hand taking you from your mortal coil. No. I won’t kill you. I won’t consume your power. But I will demand having all of you—body, heart, and soul. The two of us will be greater together as a bonded couple rather than just me having all the fun causing havoc everywhere.” Shaman clucked Sloth under the chin.

“I smell your attraction to me,” the medic stated, sneaking a glance at Sloth’s penis. “I see it, too. Yet, I also smell your fear. We can’t have that. Amorcito, you need to trust me … love me. I’m more than happy to give you some time to wrap your head around all of this. Not a lot of time, mind you, but whatever decision you come to, know this, you will be mine.”

I’ve enjoyed my foray into the ‘Helldorado Mongrels MC’ series with all of its paranormal and fantastical aspects. I honestly believe these should be read in order as there is considerable backstory so I’m not going to describe the worldbuilding again. I have been interested in Sloth and discovering what secrets he has so I was eager to hear his story. Sloth definitely has some secrets. Pretty big ones, too, that involve Emma and Gabe Dyson. Unfortunately, revealing the truth of who, and what, Sloth is hiding is a huge spoiler and I don’t think it’s fair to ruin it via my review. I can say that in this world the paranormal shifter witches are known as “maicohs” and when one of them kills a family member, whether by accident or on purpose, they go evil and become skinwalkers. Emma is a maicoh, something she has never even shared with her brother, Gabe, and now Inferno has brought in Shaman, a skinwalker from Albuquerque to hunt and find Emma. Shaman is a big, bad skinwalker, the kind of evil witch who hunts down maicohs and kills them taking their power as his own. How in the world can he be mated to Sloth who is the antithesis of everything Shaman is? I felt for Sloth (and was really happy to discover his real name) as he certainly faces a conundrum between the inevitable mate attraction and his distaste for Shaman’s evil nature. There were some interesting, albeit not exactly believable, twists and turns at the end that allowed Sloth and Shaman to get their happy ever after. The Dysons got their fortune back and everything turned out for the best. Even Inferno got what was coming to him although in a much less bloodthirsty way than I would have chosen. A good addition to the series.

Possessed by Him by Jacey Holbrand