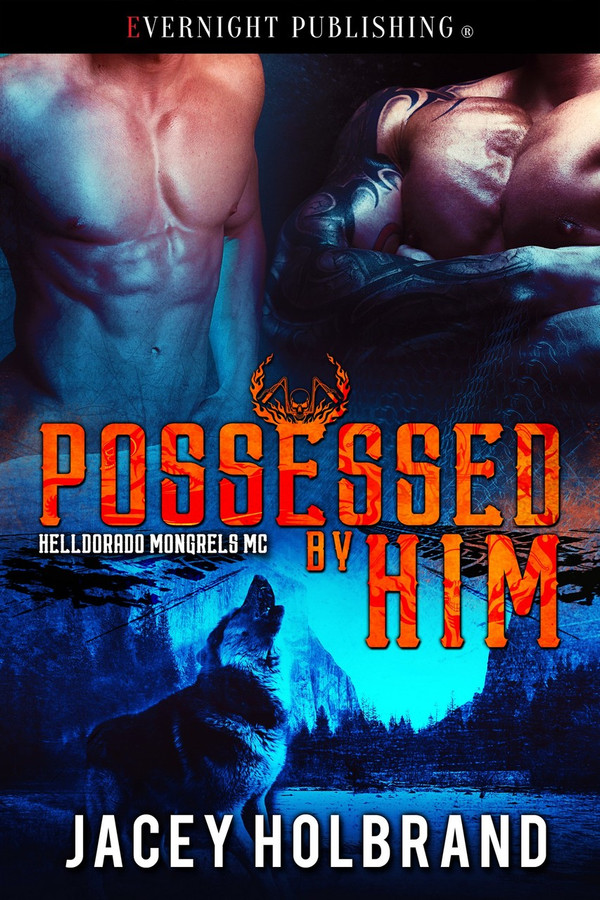 Forced to return to a place of childhood trauma, Cameron Russell fears he’ll have to confront the specter of the past once again. Instead, he comes face to face with the man of his dreams. Literally.

Unbeknownst to Cameron, Gabriel Dyson would do anything to help his human mate realize his destiny, including playing savior and invading Cameron’s dreams. When they finally meet face to face, all seems to go well. Then a member of the Helldorado Mongrels MC kidnaps Cameron, putting him in mortal danger again.

While restrained, Cameron is told a fantastical story of werewolves, which has to be myth…right? Yet memories flare to life—visions of bites and kisses—making him question everything about Gabe.

Can Cameron and Gabe’s cosmic connection, their choices, and their love surpass the secrets Gabe has and the Mongrels’ evil plans?

He ran his hands up Cameron’s smooth chest, tracing the dips and curves of his muscles. When Gabe latched onto one of Cameron’s hard nubs, Cameron sucked in a stream of air. Putting his lips on Cameron’s body was like heaven and hell. Heaven because it’d been ages since he tasted and touched his other half in the flesh. Hell because all he wanted to do was bite him and make him his for as long as their lives would last.

More heat raced through Gabe’s veins and down into his cock, making it rock hard. He gazed straight into Cameron’s blue-gray eyes. “God, I want you, Cameron. I want you to take me in that beautiful mouth of yours.”

Cameron dropped to his knees in front of him, reached out and yanked his jeans down and off his body.

He did as Cameron requested. His cock protruded from his body, bobbing to and fro as he settled into a shoulder-width stance. Staring down upon him as Cameron positioned himself between his thighs and stroked, licked, and kissed his cock and balls, Gabe tilted his head back, loving the way Cameron took command of his body, his senses. The deep blue sky fell from sight as did the rest of the mountain’s view. Gabe closed his eyes to savor the exquisite feel of Cameron’s moist, warm mouth on his shaft.

Cameron licked his way off his cock, grasped it in a semi-closed fist and pumped his hand as he stared at him. “So are you. This cock?” He lapped the bead of pre-cum that’d beaded on the tip. “Amazing.” He dipped down once more to Gabe’s crotch, taking his whole cock into his mouth.

Lusty pleasure flooded Gabe, making him ravenous for the man who moved to suck his balls. “Cameron, I want to taste you.” He tugged at him to have him stand, but Cameron wouldn’t budge.

“I’m not done with you yet.” Cameron drew his tongue along Gabe’s cock.

Gabe sucked in a thin stream of air. He couldn’t believe how wonderful the blow job felt, the wet mouth against his silky shaft. It’d been ages since he last had his mate in the flesh and experienced such intimacy with him. Though fucking Cameron’s mouth wasn’t like being balls deep in his ass. He wanted to howl at the sky with happiness.

Yet, the truth about his shifting capability and immortality hung heavy over his head. He pondered if what they were doing constituted their relationship solidifying. Probably not. Which meant it still wasn’t time to tell Cameron everything. But then, if he waited too long, Cameron might not like that either. Cameron could accuse him of being secretive. He released a big sigh.

Cameron slurped off his length. “You okay, Gabe?”

“Yeah.” He paused and glanced down at the man kneeling before him. Perhaps it would be best to just lay everything out at the start and see what happens. “Actually, there is something important I need to explain to you before our relationship develops further.”

Cameron stood and brushed the dirt off his knees. “All right. Should I be concerned?”

“No. I don’t believe so. Just some family history and—”

Rocks tumbling along the ground and off the cliff several feet away snatched Gabe’s focus. He sniffed the air. No scents that he could determine. That didn’t mean anything though since anti-scent repellants were in use by the Helldorado Mongrels.

Cameron Russell had a traumatic experience in his youth, one he wants nothing more than to forget ever happened. However, his brother has other ideas and decides that he and Cameron need to confront their fears from that night by going camping in the very same area that the incident happened. Needless to say Cameron is less than enthused. Gabriel Dyson has known his human mate was out there for decades, unfortunately when he first met him on the night Cameron does not want to have a repeat of, he was too young for Gabriel to claim. However, he has been watching out for him ever since, at least as much as he can, and he has been contacting and getting to know him in dreams for years. Cameron has been looking for his dream man for forever. Though he believes the man is not real, there is a part of him that hopes he is wrong and that he can find him. Imagine his surprise when the man he calls Dyson in his dreams turns out to be Gabriel Dyson one of the guides for his camping trip. The attraction and love is almost instant since they have truly known each other for years, but still Cameron has a difficult time accepting their bond completely. When he is kidnapped and told a fantastical story, will he believe Gabriel when he tells him the truth or will he walk away? I very much enjoyed Possessed by Him by Jacey Holbrand! The mythology and world building in the story is very well done, as is the relationship building between Cameron and Gabriel. The love scenes are super hot but emotional, which is my favorite kind. If you love m/m romance with some interesting mythology and the paranormal mixed in then you will enjoy this book too!

A love that&#039;s meant to be, two soulmates finally reunited after many lifetimes, all with shifters and a MC background. Add really cool mythology and you&#039;ve got a hot love story with a great plot. Highly recommend!