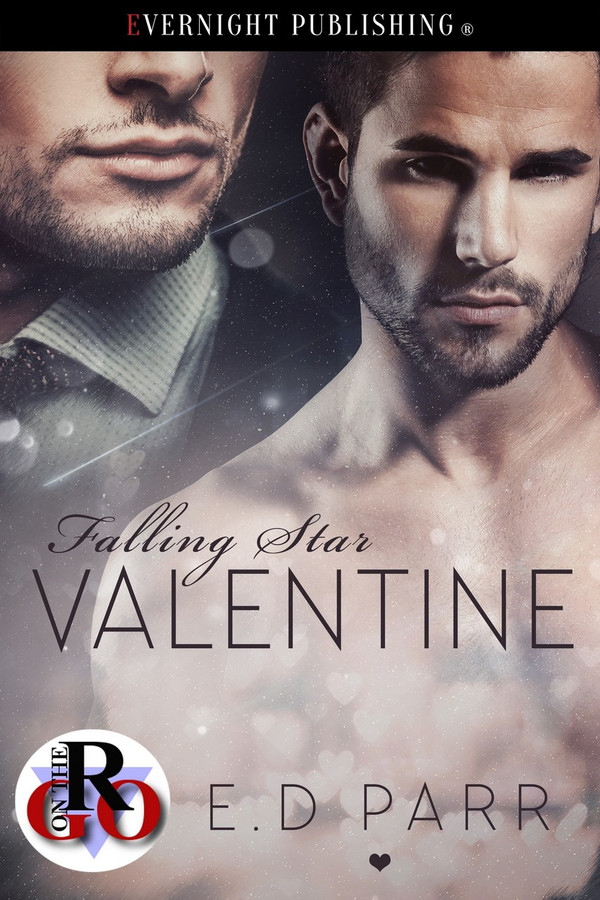 Fashion photographer Dale Walker takes a train to his hometown, relocating there after nursing a broken heart for six months in another city. His train makes an unscheduled stop to take on a mysterious passenger.

For a long time, Valentine Steel has hoped to meet a man who will love him. When he sees Dale on the train, he’s overjoyed to find a vacant seat beside him.

Dale’s immediate attraction to Valentine has him on edge. He doesn’t want another broken heart, and yet Valentine is so magnetic that Dale’s frozen heart begins to thaw.

Valentine sets out to charm and capture Dale in his sparkling aura. He can’t let the chance to have Dale’s love slip away.

A soft sound of regret that he’d given his heart away so easily escaped Dale and then the sudden slowing of the train grabbed his attention. Thrown a little forward by the rapid decrease in speed, Dale huddled back in his seat. No one sat beside him and the magazine he’d placed on the adjacent seat flew off forcefully as the train ground to a halt.

People stood and gaped out of the windows. Dale peered out at the white expanse sparkling in the morning sun, unaware until then that the train had even traveled into snow-covered country. The hum of concerned questions filled the carriage as people looked around and talked in hushed voices. There’d been no collision, no terrible sound of an accident and Dale, in the fog of his misery, waited quietly for some indication of what was going on.

An announcement floated from the practically invisible speaker at the front of the carriage. A pretty sound chimed and a soothing voice stated the obvious before giving information.

“Translines Rail has made an unscheduled stop. We apologize for the inconvenience. There is no need for alarm. We will shortly be mobile again when a passenger has boarded. Thank you and enjoy the rest of your journey.”

Dale bent to pick up the magazine that had fallen to the floor of the carriage. He hadn’t even placed a fingertip on the glossy cover when a hand extending from the cuff of a black jacket sleeve took hold of the magazine, and lifted it.

Dale swiftly looked sideways to see who the hand belonged to, and came face-to-face with a gorgeous man. Something about the man made Dale’s heart lurch, which scared him, and because of the scare his heartbeat increased. He closed his eyes for a few seconds, trying to calm this sudden flare of nerves. He gave up on retrieving his reading material and sat up in the plush velveteen train seat waiting for what would happen next.

“Your journal. Is the seat free?” The man’s gentle voice soothed him only a little as he held Dale’s magazine out, and gave an indicative nod toward the vacant seat beside Dale.

“Thank you, and yes the seat is free.” Captured by his outright beauty, Dale tried not to stare at the man. He dropped his gaze to the colorful shot on the cover, and accepted the magazine, holding it on his lap.

Dale struggled not to look at the passenger beside him, whose cologne now filled up his senses with a delicate, fresh, scent, a fragrance capturing the cool breeze crossing the ocean on a summer night, somehow full of promise. The suit the man wore was visibly expensive. Dale knew quality when he saw it even if it was only on a quick look. As a photographer for major fashion magazines, he’d gathered a knowledge and appreciation for clothes.

Dale stared ahead and wondered if this man was the passenger the train had stopped for. He edged a little away from the central armrest dividing the seats—their size was generous and the man wasn’t even close, but Dale could feel his presence as if gripped by a magnetic force. Finally, unable to help it, Dale chanced a sideways glance.

After a nasty break up, Dale is alone for Valentine’s day and has had enough. Determined to quit his moping and refusing to spend the lover’s holiday pining for his ex, Dale decides to leave the city. On the train, he meets a handsome stranger, Valentine Steel. Can these two men be exactly what the other needs? This is an interesting short story to my mind. I was a little confused until right at the end about the mystery surrounding Valentine – his back-story is where the paranormal element comes into the plotline. Despite the fact most of the plot remains mysterious until the end of the story, I found it refreshingly unique – Valentine’s character and his “quest”. My confusion didn’t hurt my enjoyment of the story, though I would have liked to have understood the subtleties a little earlier on so I could enjoy the growing relationship between Dale and Valentine. I felt the characters were well written. Dale is a fairly typical man and hero, unlucky in love and wanting to find his soul mate. Valentine, despite some of the mystery surrounding him was also interesting and I enjoyed reading about him trying to woo Dale and fall in love with each other. While there is plenty of steamy sex I didn’t find any aspect of the M/M relationship too envelope pushing. Readers who like a bit of spice with their romance should find this a fun and sexy read. With a different plotline and two very interesting characters I found this to be a great read. While I would have liked the paranormal aspect of the plot to be a little less mysterious this is a fun and deliciously short read that has plenty of spice and romance.

This MM romance is a sexy read that will have you looking for a cold shower. Emotionally charged, it captivated me and left me wanting more. It&#039;s a love story that really hit the mark.

He didn’t want the heavens or even a shooting star, he just wanted love, commitment and to be loved. He found it, and it came in the form of a star………. Valentine Steel, a heavenly star, fell from the night sky like a jewel in the rain. This was nearly his last chance of finding love on Earth – he’s hopeful: it’s nearly Valentine’s Day and with his first name as it is, he’s optimistic because he’s heard Dale’s call to the night time sky and he’s answering it…….. Dale is still recovering after finding his lover with another man in THEIR bed. He now knows the pain that falling in love brings and the loneliness that it leaves. He’s no longer looking for love now, his heart cannot handle anymore heartbreak. He calls up to the night time sky in despair, not realising that he’s been heard and Valentine is on his way….. And E.D. Parr gave us a short and nice Valentine’s storyline. For me, I missed her usual detailing, I know that due to length it is always hard to achieve but I just wanted more on Valentine, a bit more of an understanding of being a **star** in the celestial sphere. But that’s me, you may think differently? Having said that, I have to say that Dale initiated enough fuel to keep the temperature hot enough to initiate the fusion between them and therefore succeeded in maintaining enough equilibrium to make Valentine “his own Valentine Star” &lt;see what I did there?&gt; Nice sexy read but with a bit more info, could have been a great sexy Valentine read. Four celestial stars from me. ****I voluntary reviewed an Advance Readers Copy of the book**** Threebooksovertherainbow.wordpress.com

This little gem is the perfect Valentine&#039;s Day tale. It made me laugh, shed a tear, cheer at the HEA ending, and it has a unique twist that I never saw coming. One-click it....ASAP!