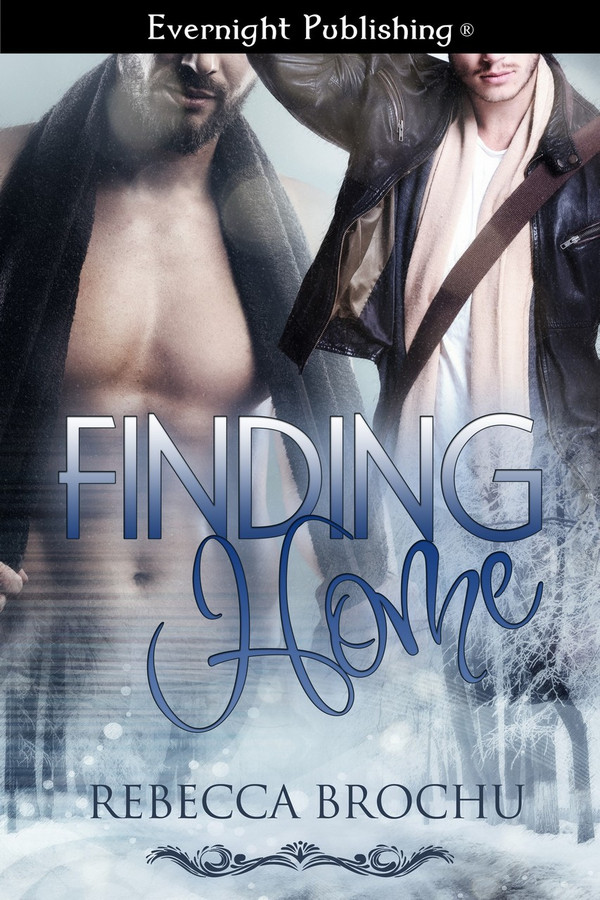 Left adrift after escaping from an abusive relationship has left Salem Rooks with little in the way of personal connections in his life.  So when Salem bumps into an attractive stranger on his way to work one morning he isn’t expecting it to lead anywhere.  He certainly isn’t expecting it to change his life.

Wyatt Pendleton is handsome, sweet natured, and homeless.  Drawn to the quiet strength Wyatt exudes, Salem finds himself pulled back to the man’s side time and time again.  Working through their differences is a challenge, as is the ever looming shadow of Salem’s abusive ex.  Despite that, Salem finds that he and Wyatt are both willing to fight to protect the home that they’ve found in each other.

He wanted Wyatt fiercely in that instance and his hands moved down of their own accord to pluck at the waistband of Wyatt’s pants.  He was all set to tug at it, to finally see what Wyatt’s cock looked like when one of Wyatt’s hands suddenly wrapped around his fingers and tugged them away.  Startled, Salem pulled back far enough to look Wyatt in the face.

Wyatt was flushed, his cheeks red above the dark line of his beard, his lips kiss swollen and his eyes bright with want.  Salem’s own face felt hot, the skin of his cheeks and around his mouth rubbed tender by Wyatt’s beard.  He leaned forward to kiss Wyatt again, but to his surprise and slight hurt Wyatt shook his head slowly.  Salem sat frozen as Wyatt raised a hand up to slowly, carefully, cup his jaw in the warmth of his palm instead in a gesture that had quickly grown familiar between the two of them.

“We can’t, Salem.  Not now, not just yet.”  Wyatt’s voice was a deep, throaty rasp that made Salem’s stomach flutter for a brief second before he focused on what had been said.

“Why not?”  Salem cleared his throat and did his best to ignore the huskiness of his own voice as doubt crept up on him suddenly.  It was enough to break through the passionate haze that had fallen over him.  “Do you not want me?”  Salem shifted nervously where he was pressed against Wyatt’s body as he waited for the answer.  He was sure Wyatt did want him, but he still felt compelled to ask.  He could feel the line of his cock pressed against his own hip, a thick hot weight that made Salem want to sigh in anticipation, but it suddenly wasn’t proof enough.  He’d been wrong about so much in the past that Salem needed the reassurance.

“I want you.”  Wyatt replied instantly before he leaned back down into Salem’s space to nip and suck at his earlobe.  Salem shuddered.  “I’ve wanted you for weeks now.  I’ve imagined being with you, in you, a hundred times.  I’d daydream about kissing you, about how you’d taste, what you’d feel like.  Wanting’s not the issue, Salem.”

Salem has been in the run for a while. Ever since he ran away from his abusive boyfriend. He gets settled somewhere and then the emails start, followed by deliveries. And finally an in person visit that does usually end well for Salem. He is always ready to pick up and take off again. That is until he runs into Wyatt, literally. Wyatt is a local homeless military vet. He has been living in the doorway of a building across the street from Salem’s apartment. After first run in Salem takes an interest in Wyatt. First it’s warmer clothes and food. Over time it becomes something more for both of them. This book is just sweet. Two lost souls find what they are looking for in the other. Perhaps the circumstances are not the most realistic, but I didn’t really care either. The great writing and emotion of both characters drew me in. This is great for a when you need a “pick me up” kind of feeling book. There is no way else to really describe it.

Each and every day Salem Rooks wakes up with a niggling fear in the back of his mind. Will this be the day he drops everything and runs, again? Outside of the military Wyatt Pendleton loses his sense of belonging. Sick and tired of war, he has no wish to reenlist, but homeless and drifting is taking its own toll on his physical and mental health. Despite the initial panic of running smack into a complete stranger, Salem feels a spark of something he has not felt in far too long. Most people look right through the homeless like they are invisible, yet this man and his beautiful blue eyes does something to Salem. Bringing Wyatt food is just the beginning. Soon he begins to get a sense of safety and comfort around Wyatt he has never felt with anyone before. They both have a past they would rather forget, but for Salem, his past comes calling with frightening accuracy. Taking the time to stop and do one small thing for a stranger shows what a beautiful heart Salem has. His strength of character shines through, even when he feels anxiety and panic attacks try to rule his life. This story is so wonderfully written, my only wish is that we could have the same insight into Wyatt’s character as well. Their feelings for each other come across as completely genuine and honest, pulling you right in and not letting go.

I cannot put into words how amazing this book is. The story of Wyatt and Salem is beautifully written and well thought out. I fell in love with Salem and Wyatt from the start, they were perfect in every way. I can&#039;t wait to check out Rebecca&#039;s other books!