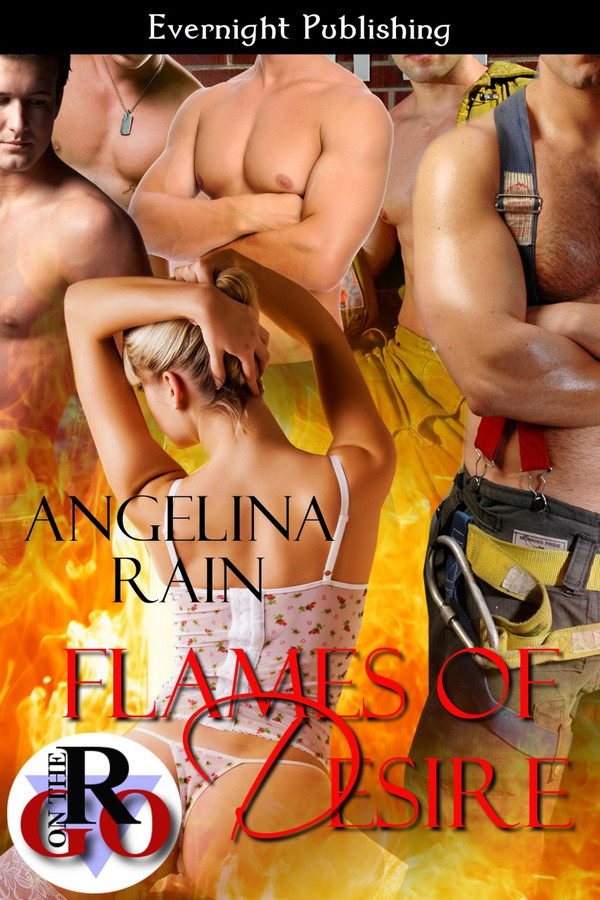 Ginelle Jinx, recently single, heartbroken, and unemployed, decides to cast an impotency spell on her cheating ex. She doesn't expect the spell to have consequences, but her house catches on fire.

Five hunky firemen come to Ginelle’s rescue, one of them being Seth Tompson, her high school sweetheart. With one fire out, she finds old flames and new ones mingling as she indulges the pleasures her five firemen have on offer.

But what will happen when she realizes she still loves Seth? Does he feel the same? Can an old flame become a raging inferno?

She showered quickly, making sure not to use up all the hot water as she was certain he would need to shower too. But, she did stay under the spray for several minutes enjoying as the heat washed away the stress from the night.

Once she was done, she pulled the curtain away and grabbed the large bath towel Seth had supplied. She rubbed it over her long blonde hair, down her face, neck, chest, and back. It wasn't until she ran it over the back of her hand that pain shot through her as though her skin had been peeled off.

"Ouch! Fuck!" She screamed and hissed in pain, remembering that she burned her hand. The shocking events of the night had momentarily blocked the pain and now it throbbed as though making up for lost time.

A ruckus sounded outside the bathroom door and it opened quickly as Seth rushed in, worry etched into his eyes. "Are you okay?"

She stared at him. The pain quickly subsided as she took in the man before her. He had showered too and now only wore a pair of denim shorts. Seth had a perfectly muscled chest and she wanted to run her fingertips along the ridges and crevices of his spectacular body. No, she wanted more than just to touch it. She wanted to kiss it and lick it and taste every inch of this man. Her nipples hardened and her pussy pooled with warm juices.

Her breath caught in her throat as a moan of need and desire escaped her lips before she could contain it. She looked into Seth's eyes and saw the same lust that reflected her own.

He took two large steps toward her and his hands entangled in her wet hair. Seth tilted her head slightly and his lips crashed over hers. The need she felt within her, she also tasted in his mouth.

I have read a book by this author and decided to read another one. I hate to say that I didn’t see the cover of this book until after I read the book. I’m not saying that the covers are the only thing I look at when I read a book. This book has just a touch of paranormal in it since Ginelle does a spell and this isn’t the first time. Ginelle has been going out with her boss and it goes on for awhile when she finds out that he has a wife. She wants to get back at him but doesn’t want to hurt his wife or his children. So she does a spell and ends up catching her kitchen on fire. I could say that it was a good thing because five sexy firemen come and put her fire out and when she see’s the person she never thought she would see again, another fire burns even hotter. Good thing that Seth Tompson feels the same way. I will warn you that this book has M/M, M/M/F/M/M/M, M/F. It is really hot and you never expect any of this to happen when you first start reading the book. I almost needed a fire hose of my own. I sit and think about how many women would do this if they ever had the chance to do it? I would like to say yes I would do it. I also think it would be hard because I am so shy. I guess true love never dies no matter how long it’s been since you saw the person. This book will be staying on my kindle in case I just need a little read to pick me up. It was a short story and I like to read short one’s every once in a while. Good thing reading books like this one doesn’t make me blush.

Flames of Desire is a fire-fighter debauchery! I had a lot of fun reading this short story by Angelina Rain. The story begins with Ginelle, a heartbroken woman who has a horrible day followed by a horrible night. After certain events, things turn for the better as she’s reunited with her old high school boyfriend, Seth, and his fire fighter friends. Flames ensue. The overall plot of the story (unknown hot men wanting to have sex with Ginelle) was surreal, but the sweet backstory between the protagonists and the fiery sex compensate for the fantasy. Furthermore, this backstory and the feelings that re-emerge are what keep this short novel from leaving the romance genre and entering the sex for the sake of sex category. To my dismay, this story had several editing mistakes that distracted me from further enjoying it. For instance, there were a few swapped tenses and words out of place: “Ginelle traced her fingered” instead of “fingers”; “collage” when it meant “college”, “over” when it meant “oven”, etc. It was nettlesome, just like the very last line of the novel, which reminded me of a line pulled from a porn film. The choice of words was unfortunate because, as I mentioned before, the author had successfully managed to tread the delicate line between porn and romance. Truly, Flames of Desire is more than just intense sex between five gorgeous men and a woman. It has humor, an easy flowing plot and there is emotion and sentiment in every touch and caress that the characters give and take (for instance the male/male scene or simply the way Seth and Ginelle interact). Flames of Desire is a fun, extremely hot story, best read in privacy, especially because if you’re anything like me, you’ll have a hard time forgetting the idea of five men in bed.

Definitely a hot read! This short story is all about sex, but we do see some back story. Revenge is one of those awesome things that when it goes right, it is sooooo sweet. Ginelle gets her revenge and she gets what she wants too, she is lucky she knows how to work a magic spell—which was pretty odd. I would have liked to have heard more about her witchy ways, but the story doesn’t dwell no that AT ALL. The sexual details could have been a little more thought out because there were times when one position must have moved to another one, but it wasn’t specified. Warning: This is a story about one woman and five guys and the guys have sex with each other as well.

nitely a hot read! This short story is all about sex, but we do see some back story. Revenge is one of those awesome things that when it goes right, it is sooooo sweet. Ginelle gets her revenge and she gets what she wants too, she is lucky she knows how to work a magic spell—which was pretty odd. I would have liked to have heard more about her witchy ways, but the story doesn’t dwell no that AT ALL. The sexual details could have been a little more thought out because there were times when one position must have moved to another one, but it wasn’t specified. Warning: This is a story about one woman and five guys and the guys have sex with each other as well.