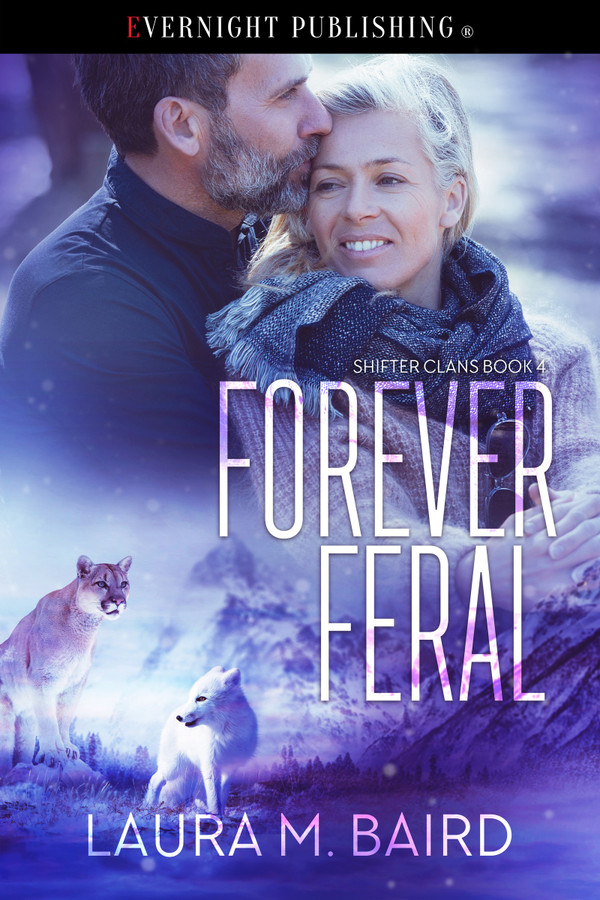 When invited to spend Christmas in Arizona with their friends they now consider family, Irena and Roberto don’t hesitate. The Arctic fox shifter and mountain lion shifter are right at home among the others—hawk shifters Mason and Brennon, wolf shifter Max, and their mates, Charity, Mikki, and Caterina. Not to mention the precocious and delightful Leah, Charity’s niece.

The holiday brings welcomed surprises such as proposals, babies, and snow in the desert. Brought together under dire circumstances and bonded by kinship, these shifters and their mates discover a love that will forever be feral and ever-lasting.

“Oh! Oh! Look!” Leah exclaimed as she rushed to the window. “The snow came!” The excited young lady parted the coverings, allowing the view to brighten the expansive living room. Resting her hands on the windowsill, she bounced in place as she turned to flash a brilliant smile at the adults gathered in the home of Mason and Charity Wegi. Leah’s parents, for all intents and purposes.

Snow in December wasn’t uncommon in many parts of the country. Snow in southern Arizona, however, was. Or so Irena had been told. An unusual storm front was passing over the desert, and the greater Sierra Vista area was quickly becoming blanketed with pristine flakes. Two days until Christmas and the winter flurries were making the holiday season feel that much more festive.

Irena, an Arctic fox shifter, certainly welcomed it, along with her mate, Roberto, a mountain lion shifter, who craved the colder climate right around this time of year. Although they resided in Tegucigalpa, Honduras, they regularly escaped to higher elevations to enjoy not only the snow but also the tranquility.

This year, though, they weren’t minding in the least being among many. Many being six other adults along with the precocious and adorable Leah. Irena and Roberto had been invited to spend the holiday in Arizona by Mason, a hawk shifter and now tribe leader of the Tohono O’odham. They’d come to know him by way of Max Collier, a wolf shifter and Mason’s fellow tribe member.

Much had happened over the last six months since Max had come through Honduras, seeking help from other shifters. Roberto and Irena had been eager to assist, knowing the success of his mission meant safety for all in the shifter community. What had started with Mason and Charity at Ft. Huachuca continued with Brennon, Max, and Mikki in Guatemala, and ended with Max and Caterina in Honduras.

Yes, a lot had certainly happened. Irena loved her new friends and the relationships they had quickly and solidly forged. And when invited to spend the holiday in their company, she and Roberto hadn’t hesitated to accept.

Christmas is here. Wedding bells are chiming. Babies are on the horizon. And shifters are enjoying their happily-ever-afters in Forever Feral! This was more like a really long epilogue. If you follow the series then you will totally want to read this. It’s nice to see how the families have adjusted and grown. We get to see the couples from the previous books and there’s a very sweet wedding. There is no action so the pace is a little slow moving. That said, if you enjoy romantic weddings, you’ll probably want to read this. Lovers of sweet romances and chick lit, I’d also recommend Forever Feral to. If you’ve read the previous books in the series, then this should definitely be on your list. Book one is In His Sights. Book two is Sights on Her (Awesome read!). Book three is Feral Kind of Love. Shifters. Weddings. Romance. Forever Feral.