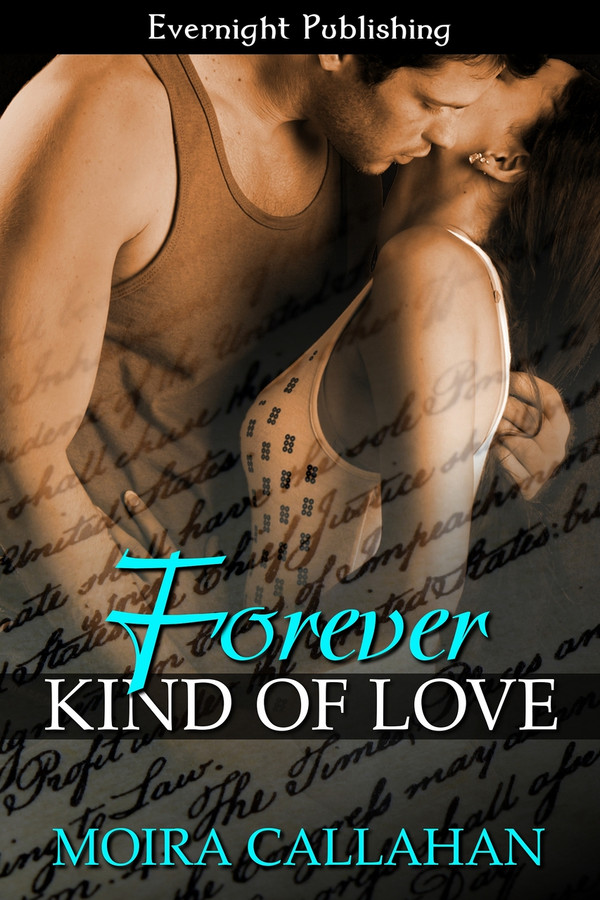 Taylor Granger was the one. Veronica “Roni” Malone knew it the first moment she saw him. He made her heart race and her palms sweat. Who cared that they were only in high school. She knew. Heartbroken when life pulled them in different directions, Roni spent the next twenty years trying to fill the gaping hole in her heart. When her beloved Mustang gets towed into Taylor’s mechanic shop, she knew she’d been given a second chance.

Taylor couldn’t believe his eyes. The woman who’d tortured his dreams stood in front of him again after all this time. Roni had rocked his world from day one, and he wasn’t about to let the best thing that ever happened to him get away again.

Back together, the fire sparks and passions burn as they try to find their way back to what they’d left behind and to the realization that their love had always been a forever kind of love.

Smiling at the receptionist, a pretty thing around seventeen, Roni took the clipboard and filled out the form with her info and the car’s info, too. Then the hair on her nape stood up and she stilled, the feeling of being hunted sliding over her.

Lifting her head, she blinked and frowned, there was nobody there. Until she turned and saw him. Taylor Granger. Her first and only love, not that she’d ever told him, was standing in a doorway between the office and the shop.

Wiping his hands on a rag, he had a pair of overalls on, the arms and top wrapped and tied off around his waist, leaving only a thin, tight t-shirt covering his massive chest. Holy mother of God, he’d filled out good.

And he was checking her out. She’d filled out a bit, too. Gone was the gangly teenager with more joints than grace. And her boobs had filled in, too, finally, just after high school, so she had those going for her. Unfortunately she’d also filled out in her hips and ass, making her curves very noticeable and rounded. Feminine, she liked to say, even as her scale yelled at her every morning that she was overweight.

Then his eyes lifted to finally meet her own, and it was as if all the oxygen had been sucked from the room. Roni had serious trouble pulling in a breath as his pale-blue eyes met hers. Finally, he blinked and she was able to draw air again, her starving lungs grateful for the reprieve.

“Fancy meeting you here, Roni,” he said. Holy hell, his voice! Deep, rumbly, and it went straight to her core, making her vibrate better than any of her battery operated boyfriends.

“Taylor,” she greeted him, eternally pleased she sounded like she had her shit together. Because she most definitely did not. She was that giddy teenager again inside, but at least externally she was pulling off the adult version of herself. “I didn’t know you were living and working here now.”

“I figured I might as well. I’ve got some family in the area that made the choice easy. I’m guessing that’s your car that just came in,” he said, not a question.

“Yeah, she decided she didn’t want me going for a massage today and keeled over to make me late.”

His lips curled, ever so slightly, and nodded. “Come on back while I take a look and we’ll see what she’s up to.”

Handing the clipboard to the receptionist, who was watching us avidly, Roni thanked her and then followed Taylor out to the garage. Thankfully, she’d worn jeans, a t-shirt and runners to go to her massage, because in heels she would have fallen on her ass, given how wobbly her legs were.

They only got worse when he bent over her engine compartment and the overalls cupped his damn fine ass. Fuck.

Forever Kind of Love by Moira Callahan is a great contemporary romance that I enjoyed reading. Forever Kind of Love is a story of love found, lost, and restored. It is about Taylor and Veronica and is a sweet story that I won’t soon forget. This is the first book that I have read by this author and I wasn’t disappointed. I look forward to reading other books by her as well. Veronica or “Roni” grew up in a not so happy home so she was thrilled when her parents decided to get a divorce. It was what she had been wishing for, for a while because she was tired of all the fighting. When she meets Taylor she is smitten with him and she knew that she wanted to spend forever with him. The more time they spent together the more her feelings grew. When their lives took a turn in opposite directions she was devastated but she tried to move on with her life and tried to fill the hole in her heart but nothing seems to work. Years later her car ends up being towed to his shop and their passion is reignited once again. Will she be able to walk away this time? Or will they finally live out their happily ever after? Taylor was a good guy and but not everyone saw him that way. When he met Roni his life changed for the better. He knew that he would be there for him and she would be there for him as well. They were inseparable from the moment they met and he wouldn’t have it any other way because she is his world. After High school their paths in life didn’t take them in the same direction so they were soon separated by life. After many years have passed he gets a Mustang in his shop and is surprised to see her when she walks through his door to collect her prized car. Everything comes into focus and he knows he isn’t going to let her walk out of his life again. Can the two of them restore what was lost and more? Or will he be left the empty vessel he has been over the years she hasn’t been in his life? I really enjoyed Forever Kind of Love. I thought it was a believable story and I liked the characters. I liked that the story illustrated that true love never dies. I liked Taylor because he was a good guy and a hard worker. I also like that he was perfect for Roni even after all the years they were separated. I liked Roni too but not as much as I liked Taylor. I didn’t really identify with either of the characters but still cared about them. I would have liked to read more about them as well but the story did all come together well in the end. I would recommend Forever Kind of Love to those who enjoy contemporary romances.

I was a little thrown by the diary format the book took at first till I got the hang of it. And I loved the snark the teen-aged Roni used to express her feelings. I remember those days. Taylor was NOT your average teenage boy, that&#039;s for sure. I would have snapped him up if I were Roni, but she didn&#039;t want to lose a good friend so she never fessed up. But she did express all in her diary. Another little foible that threw me was the mix of first and second person in a single paragraph. That happened a couple of times and interfered with the flow of the story but nothing too major. My one complaint about Taylor was if Roni was it for him, why did she have to stumble into his shop for them to reconnect? But once she is there, he&#039;s like a dog with a bone. I really enjoyed the lack of drama in the form of a stalker or some other crisis, it was just Roni and Taylor reconnecting and finding they never stopped loving each other, and finally taking it to the ultimate step of being intimate. Twenty years is a long time to wait to be with the soul mate you met in high school. But somehow I don&#039;t think they would have appreciated each other as much had they started together at such a young age. A good read.