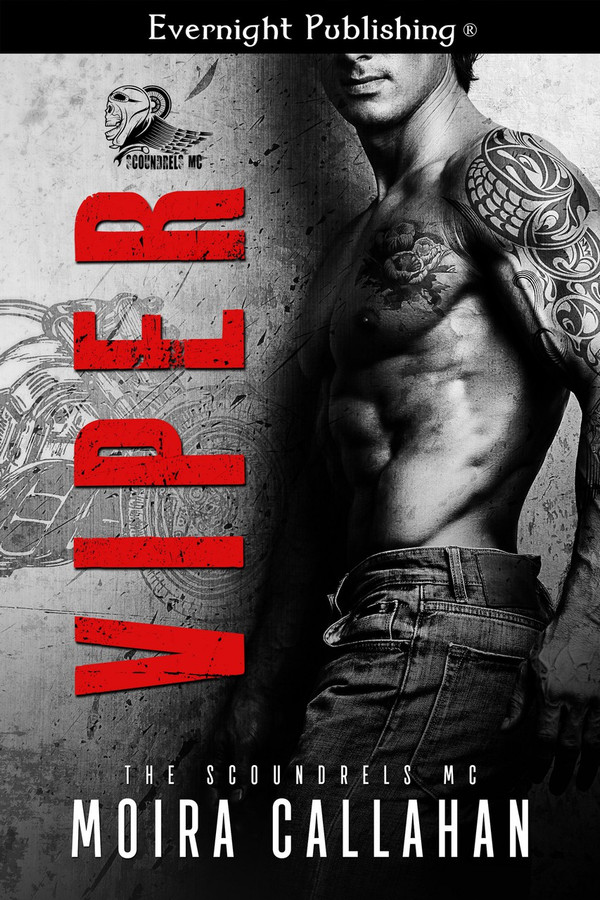 An enemy from the club’s past returns with a vengeance. The MC president and his old lady are missing, and the man behind the act is in the wind.

Krista Richmond has always been protected from the club’s shadier endeavors. In one split second she finds herself thrust head first into the chaos. Relying on a man she knows she can trust with her life, if not her heart, Krista isn’t backing down from whatever he and the club need from her. Now if only her heart would get the memo.

Dillon “Viper” Kendrick is not a man to be trifled with. He’s earned his spot at the table by being smart and merciless. There is nothing that can push Viper off balance—except her. It’s futile fighting his feelings and yet losing her would kill whatever good remains inside him. Which means saving her parents and killing the man who threatens them all.

Viper couldn’t resist her. He took her mouth in a kiss that was anything but gentle. He was too hungry for her. Her taste only sent his need higher and made his cock twitch against her thigh. She pressed in closer to him, the heat from her pussy making him growl deep in his throat. Dropping a hand to her ass, he cupped a cheek and pulled her in against his aching dick. Then she began to rock her hips.

Tearing his mouth from hers, he found forming thought a challenge. “Fucking hell, woman, what you do to me. But I won’t take you until you talk to me.”

She pouted at him but settled down on his thighs again. “I should hate you.”

“Yeah, you should.” His hope was that she didn’t.

“I should also throw you out of the room and demand you leave me alone. But I can’t. I don’t think I could ever truly hate you, Viper. I’m still upset with you and I might be for a while yet, but I also want you something fierce. I have for years. Yes, Daddy’s going to be upset, and we’ll deal with that together. Mom will help there. She’s rather fond of you, after all. And I’m definitely worried about the fallout this could have on you with the club. Not enough to let you go, though, for the record.”

He could deal with all that. In fact, the coiled tension in his chest loosened up a lot from her words, letting him breathe easier. “I will do anything you need me to do to help you get over your upset with me. Tell me what you need and I’ll do it, no questions asked.”

“Right now, all I need is for you to follow through. I need you, Viper. Inside me and making me forget everything for a time. Then I need you to hold me tight and never let go.”

“Then strip me down and fuck me already.”

A shudder tore through his body at her husky demand. He grabbed her shirt hem and pulled it off over her head. The instant he saw her bared, the air was slammed from his chest. “Beautiful,” he got out with a groan. Tight nipples surrounded by darker areolas topped heavy breasts. She was his fantasy made real, and she was all his. Dipping his head toward a nipple, he flicked it with his tongue and then latched on.

Her hips lifted to rub against his cock while a moan tore from her body. Krista grabbed onto his head and hair, pressing him in closer to her lush breast. Sucking hard he rolled the nipple against the roof of his mouth while grabbing her ass in both hands to pull her tighter against his throbbing dick.

Krista used the hold on his hair to yank him up for a kiss. Thrusting his tongue in to meet hers in a duel, Viper pushed up to his feet and spun around. Slowly, he laid her out on the bed, keeping their mouths fused together. His weight pushed her into the bedding but never stopped her hips from moving. She was trying to drive him insane.

Introducing The Scoundrels MC, where the men are even stronger thanks to the women at their side. In the debut installment of the series, author Moira Callahan rolls out VIPER. Viper has no intentions of messing around with Krista, the club president&#039;s daughter. Fate has other plans and they are soon heating it up on all fronts. When the MC is threatened, the bond between the two gets stronger. When the danger is over, will Viper go against his club and fight for Krista? As the beginning of the series, this story sets the stage with interesting characters. I was impressed that the female characters, especially Krista, were spunky and full of life. That strength really added to the appeal amid all of the alpha male members. The chemistry between Viper and Krista is sizzling and unfolds in explicit detail. Couple that with the drama of the MC being under attack and there&#039;s plenty of action to go around. - See more at: http://erotic.theromancereviews.com/viewbooksreview.php?bookid=21855#sthash.myvQSrOK.dpuf

Interesting, MC romance/action. No cheating and a good story. I will continue the series when it comes out. 3.5 stars