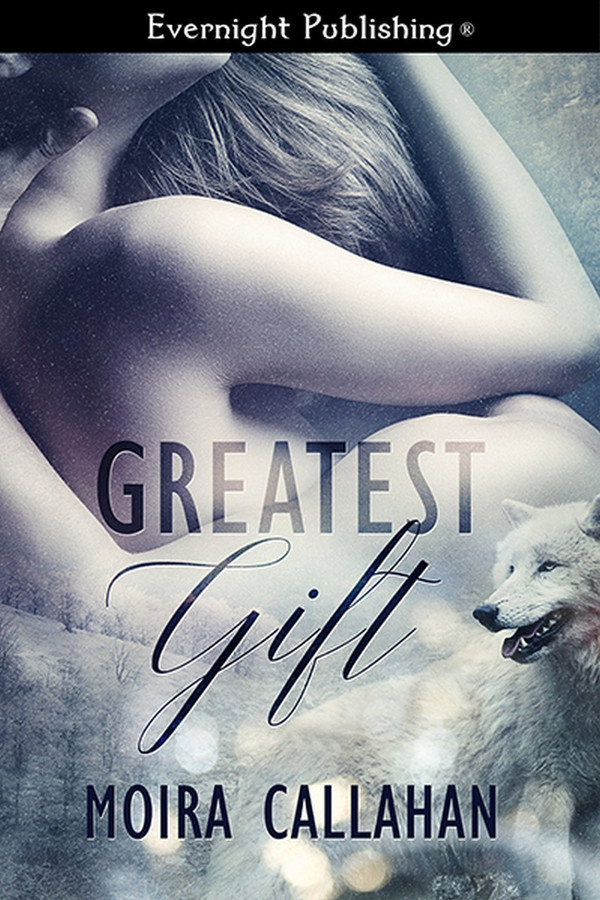 A winter storm will be the catalyst for two stubborn fools to finally realize they are meant for one another.

Holland Frost feels the pull toward him each time he comes near, yet he scares her on a level she can’t explain. When they finally hash things out between them, she discovers there is more to him than she could have believed.

Jakob Nichols has fought instinct when it comes to Holland, but finally gives in to his wolf’s demands to do whatever is necessary to protect his mate. She is his, and no matter if it’s a broken down ride, or late night disturbance, he will be there for her throughout it all.

When a piece from Jakob’s past returns to haunt the pack, Holland stands at his side to support him through it all. Their love, she realizes, is truly the greatest gift.

He scented her nerves kicking up again, but the arousal that mixed with it told him clearly she wasn’t afraid. Jakob could handle nervous, fear was an entirely different mess. Once she’d hit the button for her floor, he boxed her into the corner. Enough space she could bolt if she truly wanted to, but close enough to keep her attention fully on him. “We still have a few things to talk about, you and I.”

It was adorable how she switched between watching the numbers clicking on the display and him. Her fingers compulsively clenched and released her keys, yet another tell she had. Why the hell he hadn’t cornered her before was beyond him, but he was damn well going to make up for it.

“I think you do know exactly what I mean,” he said quietly.

Her sharp breath had him wanting to press in closer. But the bell announcing her floor saved her, for the moment. Stepping back, he grinned when she bolted out from the elevator and attempted to stay out in front. Jakob caught up with her while she scrambled to get her keys into the door, and pressed close to her back. A small fumble, and then she had the door open.

When she was inside, breathing erratic, he lifted a brow. Poor thing looked ready to slam the door in his face. After a moment’s debate, he watched as she blew out a resigned breath, stepped back, and waved him in. Frankly, he was stunned. He figured she would have told him to get lost.

Not one to complain when opportunity presented itself, he stepped into her place. Immediately, he was surrounded by her scent. His cock throbbed behind his zipper, and his balls grew heavy with need. A quick adjustment while she was distracted hanging up her jacket ensured she wouldn’t pick up on his problem right away.

She headed straight into the kitchen, and put the kettle on. Following her at a slower pace, Jakob took in the surroundings. The apartment wasn’t huge, but it felt homey, and was impeccably kept. Older furnishings that had been cared for and looked damn comfortable filled the living room with a few photos, and some art on the warm yellow walls.

Holland was facing him when he wandered into the kitchen, her gaze wary, and her body language telling him she was on guard. What exactly she expected he couldn’t even hazard a guess at. What she would get would depend on her.

“Did you want some tea?”

The hesitant tone had his hackles going up. Something was off, and Jakob would bet it was because he was in her space. At a guess, he was willing to assume she didn’t have many folks over, and likely even fewer men. Good thing too. If he’d caught a man’s scent in her place who knows what the fuck he may have done. Moving straight toward her, he braced his hands on the counter at her back, and leaned in. Her hands landed on his chest, and her fingers spread out.

Since she didn’t push him away, he pressed a little closer. “Some tea sounds good,” he said. Dropping one hand to her hip, he watched her closer. Any signs she was panicking, he would back off. He wanted her uncomfortable, but panicked didn’t suit his purposes. “We can enjoy it while we talk more.”

Her fingers curled to clutch at his shirt. “What is there to talk about?”

I absolutely loved this book. Being a huge fan of shifters, this immediately caught my eye and Ms. Callahan gifted me with a copy of it. If she hadn&#039;t, I would have bought it anyway!!! LOL ! Holland and Jakob are perfect for each other but it takes some time for them to come together. The book is wonderfully written and totally kept me interested until the very last. I loved it!!! Now I&#039;m wondering about Jakob&#039;s buddies and hoping they get a story somewhere down the line!!!