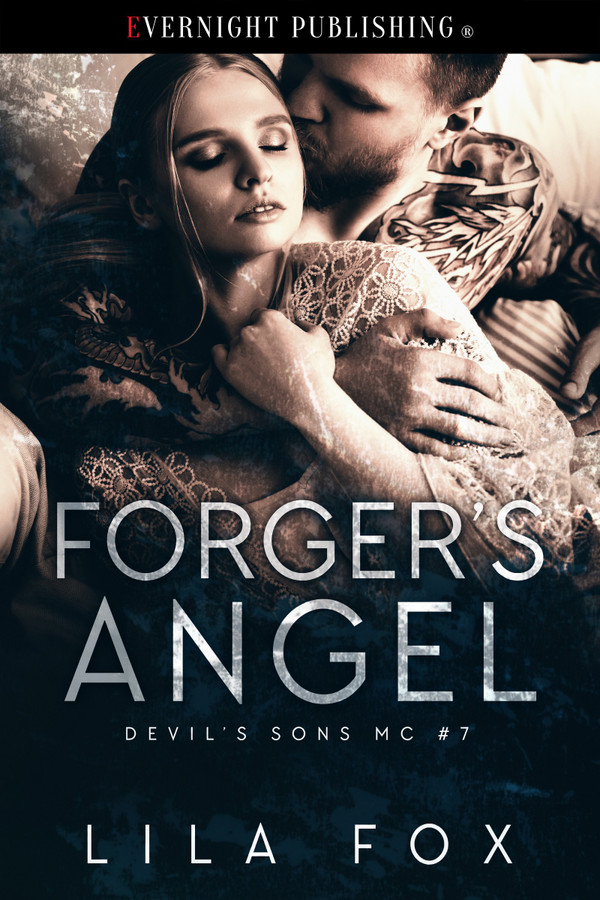 Lina was living her life and doing the things she wanted to do. If she didn’t feel fulfilled, it was okay. She worked hard, paid her bills, had a nice apartment and great friends. What she didn’t expect was her life to be turned upside down and everything changing against her will. The last thing she ever thought she’d do was live in a biker club.

Forger was a bastard and didn’t give a shit about anything in his life and nothing made him happy. It had been so long since he’d smiled that he couldn’t remember how it felt until he found his angel. He wanted to be the man to protect her.

He found a woman that cared for him and just him and it was something he never thought would happen. She runs from him because of his fear and neglect, and he’ll do anything to keep her with him. If he lost her, he knew he’d never be the same and would never heal from the loss.

If everyone thought he was dangerous before, try taking away his angel and see how much of a monster he could be.

His head finally lowered, and he took her lips. The way he kissed her was deep and hard, ramping up her already crazy desire. One of his huge hands cupped her breast, and he used his thumb to caress her nipple, making it hard and her breasts feel heavy.

Very quickly, she was begging and writhing against him.

He slid his hand down her torso to her pussy lips. He gritted his teeth, and she whimpered when he slipped a finger down and into her tight, wet cunt.

“Jesus, woman. You’re so fucking tight.” He shook his head. “No, put your hands up by your head.”

“And you will, just not right now. I’m too fucking close to the edge.”

Forger watched her expression as he pulled out and then pushed two in simultaneously.

“Damn woman, you’re so fucking beautiful.” He bent to take a nipple and sucked it into his mouth, making her cry out and arch off the bed.

He moved down the bed so his face was even with her cunt. “Fuck yeah, let’s try three fingers.” He pushed them into her cunt at the same time he licked and then blew off her swollen clit, making her scream again.

Damn, she was so responsive to his every touch, making him feel ten feet tall. He’d never had a woman act like this, but then again, he always fucked whores. After a few years of fucking a hundred guys, they probably didn’t feel it, and he hadn’t tried that hard because he didn’t care.

Her voice started getting desperate as she begged him to fuck her.

He liked how she stared up at him in a daze as her breathing was raspy and her skin flush with satisfaction.

Forger grabbed a condom out of the nightstand drawer and rolled it on before moving between her legs. He cradled her head between his hands as he started to push into her, watching every expression that crossed her face.

He stopped when her nails dug into his side, and she stiffened. “Easy, you can take me. I’ll go slow.”

She sighed and relaxed. He didn’t wait but thrust the remaining inches into her cunt, making her scream, but he could tell by the look in her eyes it was not from pain.

Her thighs tightened around his hips when he tried to pull out.

“You’ll stretch out the more we fuck.”

She nodded and relaxed her legs.

“All right. We’ll take it slow at first.” Forger started to pull out, going slow and easy, waiting for some sign from her that she needed more or was hurting. He didn’t know how long he’d be able to keep it up because he needed to pound into her so badly that his whole body was tense with need.

He gently fucked her for a few minutes. “Let’s go a little faster.” He put some power into his thrusts, and he intensified them when she started moving and begging him.

“That’s it.” He bent and took her lips as he pushed into her, getting swifter.

“Please, Forger,” she cried out.

“Come for me, Angel.” He felt her tighten up on him, making it hard to move inside of her, and he knew she was close. He rammed into her several times, throwing her over and then taking his own pleasure.

Fuck, it was the best feeling in the world, and he couldn’t wait until they did it again. At the moment, he was trying to get his heart and breathing to slow down as he braced himself on his elbows by her shoulders.

She slid her hands up and down his back.

“You made me come twice. I didn’t think that would ever happen,” she said.

Forger found the strength to pull out of her and slide to the side before pulling her into his arms.

He kissed her temple. “You are amazing, Angel.”

She grinned up at him. “You’re the amazing one. I still can’t believe I had two orgasms.”

She snuggled against his chest, sighed, and went to sleep.

It was the best feeling in the world, but it was also the scariest for him because of the depth of emotion he felt. He’d have to find a way to deal with it because there was no way he’d ever lose her.