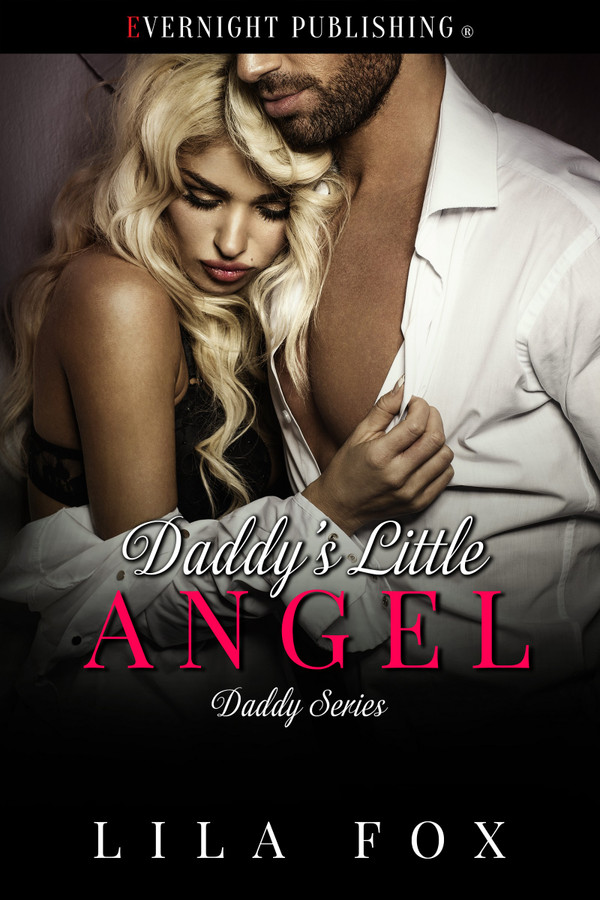 Eve Sherman had been a prisoner in her own home since she was born. Her father abused and terrorized her and always made her feel like something was wrong with her. She did everything for the man—cook, clean, and even rub his gross, smelly feet. At night she’d pray for someone to save her, and sometimes she just wanted to die thinking she couldn’t take another day like the one before.

Patrick Harrington took one look at the broken young woman and knew he had to do something. With help from friends, he gets her away from her horrible father and into his house, where he could spoil her the way she should have been all along. Now he has to get her to trust him enough to become his little and make his dreams come true.

Eve trusts the large handsome man that made her feel special. When she finds out the type of relationship he wants with her, can she find the courage to give him all that she is and trust him to take care of her?

He lifted his head and groaned at the desire-filled look on her face and her red puffy lips.

His eyes closed as if he were in pain. “Oh, hell,” he murmured.

“Is it okay to call you that?”

“Hell, yeah.” Patrick gritted his teeth as a wave of need so intense raced through him. He lifted her high against his chest, stood, and walked them into his bedroom, slamming the door closed behind them with his foot before laying her on his bed.

He stripped her quickly before tearing at his own clothes.

“If you want to change your mind, this is the time to do it,” he cautioned.

Eve’s stare roamed all over him before going back to his face, and then she shook her head. She held her arms out and waited.

He groaned and fell on top of her on the bed, being careful to keep most of his weight on his arms. He pressed hard kisses to her lips until they were red and swollen before moving lower and taking first one and then the other nipple into his mouth and sucked firmly.

He slid one hand down between them and speared his finger between her pussy lips, making her squeak. He thrust one finger into her, being careful not to break through her hymen.

“This is what my cock is going to feel like fucking your cunt, baby. Only better. It will hurt to get it in you the first time, but after that, you’ll beg me to fuck you all the time.”

She whimpered as she clutched his shoulders, digging in her nails. “Please.”

He lifted his head. “What, baby girl? You want your daddy to fuck this little cunt?”

He switched his one finger with two, stretching her tight cunt. “Soon, baby, you’re just about ready.”

He slipped his fingers out of her, brought them to his mouth, and sucked them clean. “Jesus, baby, you’re an addiction.”

He spread her legs and made a place between her thighs. He adjusted his cock until the tip was lined up with her pussy.

“Hang on to me,” he said. The moment he felt her hands on his shoulders, he thrust into her, taking her cherry in one quick move, hoping it would be easier on her. He stayed frozen inside her as she tried to dislodge his body.

“No, Daddy. It hurts. Stop,” she cried out as tears rolled down her temples and into her hair.

“Shh, baby. It’s going to be fine. I promise. Just give it a minute. Trust me. The pain will go away shortly, and you’ll never feel this way again.”

Eve sniffed and nodded. After a few minutes, she slowly relaxed under him.

He knew it wouldn’t long before the pain receded, and the heat started to build inside of her again.

“How are you doing?” he asked her.

“I’m better,” she said and sniffed.

“Let’s try it.” Patrick slowly pulled out and pushed back in. “How’s that feel, baby?”

She hummed, nodded, and kept her gaze on his.

“More?” he asked and smiled when she nodded vigorously.

He picked up his pace and was soon thrusting powerfully inside her. He knew she was close when she tightened on him, making it almost impossible to move inside her.

He reached between them and pressed on her clit, pushing her over instantly. He followed a second later, draining his balls into her sweet cunt. His head dropped onto her shoulder as they both fought to calm their breathing.

He pulled out and slid to the side of her, tucking her tightly against his chest.

“Eve, baby, I should have warned you before. Now that you’ve given yourself to me, that’s it. You will never leave me.”

She looked up at him. “But I don’t want to leave.”

“Good. The fact we might have just made a baby compounds it.”

“Yeah, I didn’t use a condom, and I’d guess you weren’t on anything.”

“We need to talk and decide if we want kids now or wait a bit.”

Tears burned Eve’s eyes. “I always dreamed of having my own family. I just never thought it would happen.”

“Well, it will happen,” he said and grinned. “And it’s only going to get better.”

She smiled brightly. “I love you, daddy.”

He kissed her forehead. “I love you, too, baby.”

They rested for a moment before Patrick stirred.

“Let’s get in the tub. It will help with any soreness.”

She screeched when Patrick picked her up and tossed her over his shoulder in a fireman’s hold.

He chuckled. “Carrying you.”

“Daddy…” she yelled when he smacked her ass.

He set her on her feet and started the water in the tub.

She looked at the piece of porcelain then to Patrick and turned bright red. “With you in the room?”

He chuckled. “Yes. There’s nothing we’ll hide from each other.”

She staggered in and sat down on the cold seat. She tried, but the pee wouldn’t come. “I can’t.”

He snorted and left the room. She immediately was able to release the stream of urine and squeezed her eyes shut when Patrick strode back in before she was finished. She wiped quickly and was stunned by the blood on the tissue.

“It’s normal to bleed the first time, baby. It will be fine. The bath will help.” Patrick turned off the water and threw in some soothing bath salts.

She flushed and walked to Patrick. He stepped into the tub, sat, and then helped her in to sit in front of him and between his legs. Right away, the warmth of the water started to ease what little soreness she had.

He picked up a washcloth and added bath soap. He slid the cloth over her whole body, gently messaging her shoulders and hips and paying particular attention to her pussy and nipples.

When he was done with her, he quickly washed himself.

She closed her eyes and relaxed back against him. She’d never felt so cared for and knew she could get used to it very easily.

They soaked for over twenty minutes and only got out because the water cooled. Then they rinsed and stood. Patrick helped her out and stood on the bathmat while he dried her. He pulled on a sundress over her head and then shorts and a t-shirt for him.

“I bet dinner’s about ready.”

“I think we both worked up an appetite.”

She felt a blush overtake her face. She didn’t know if she’d ever get used to his teasing, but she also didn’t want him to stop.

Eve has been isolated by her abusive father – taken out of school, no friends allowed, even her mother has died. She knows of no other way to be and her father tells her all the time that she wouldn’t be wanted anyway as the devil lives inside her. This is the fourth book in the Daddy’s series and we get to see a lot of Larkin and Brylee as they were friends with Eve in high school. Gage and Darian are on hand to help Patrick out with the organisation of Eve’s rescue and care. Although still a novella, I found this one to be better rounded-out than the previous stories. I really felt for Eve and her situation and am happy that she has found her HEA. This is the best in the series so far, in my opinion, and I have no hesitation in recommending it.