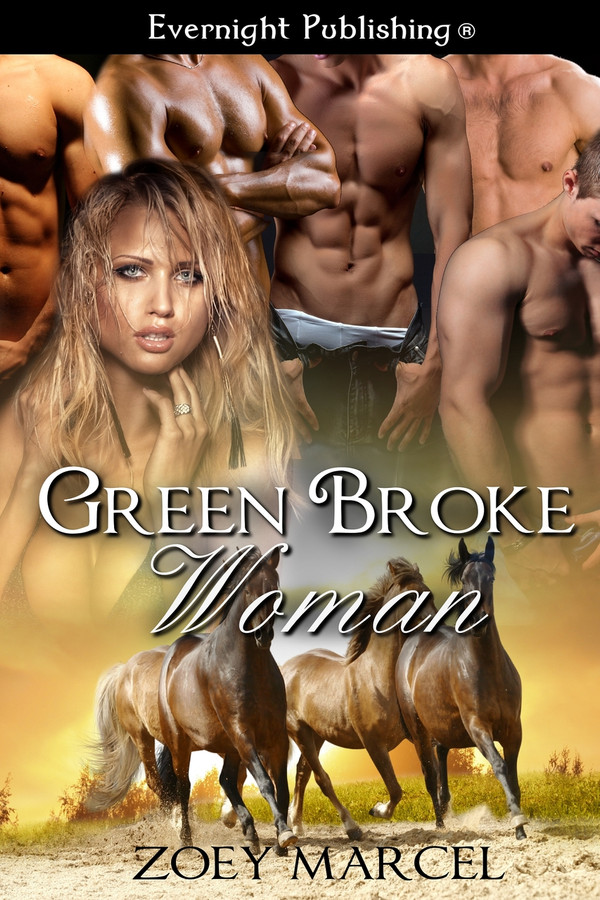 She never counted on falling for the Dom who trains her or on falling for Virgil Paisley, the hot cowboy in a white Stetson who comes to her aid when duty calls Hugh away mysteriously.

When Kayla returns to Kentucky, Travis, Keith, and Jake Langley profess their love to her. But a predator from Kayla’s past wants her back, and when she least expects it Hugh and Virgil walk back into her life. All five men want her, but none of them are willing to back down. Will she have to choose from among all of them, or is there another way?

“Get on top of him, Kayla,” Jake ordered. “I want you to suck his neck purple while I stretch you.”

Kayla straddled Virgil and leaned forward, running her fingers through his soft locks as she lavished kisses on his neck.

Jake's lube-covered fingers slipping into her anus was an uncomfortable invasion. “You're so tight, I wonder if I’ll even fit.”

“Jesus, Jake, give it a rest,” Keith commented.

“How many fingers do you reckon I can shove up here?” Jake asked.

She clenched her hindquarters in apprehension.

“Ugh! Quit screwing around, Jake. I want action,” Virgil complained. “She's so wet, it's killing me.”

“I can't help it. You feel so warm and good and manly.” She snuggled into him as Jake massaged her sphincter muscles into complacency. He rubbed her anus and nuzzled her back like an affectionate cat.

“Start sucking, subbie. I told you to give him a hickey,” Jake reminded her.

She gathered Virgil's skin into her mouth, sucking his neck hard and sensually, spurred on by his enthralled noises.

“Let me see.” Jake yanked her head up by her hair, cock stiffening against her back when she let out a breathy gasp over his roughness. “That's a real nice hickey, baby. You did good. Virgil, get up. Once I'm situated, you can come back.”

He helped Kayla sit up, and Virgil got off the couch. Jake laid her back down on the couch on her stomach.

“Breathe and push out.”

She did as he ordered. Once his cockhead popped past her tight ring of muscles, the pain evaporated into a mere unpleasant memory. Now there was only discomfort and impossible fullness. The couch was wide enough that he could roll with Kayla, so he lay on his back and she was impaled on his cock with her back against his chest and her bottom smashed against his groin. The movement before Jake situated himself caused them discomfort that subsided once they were in position.

Travis knelt and swept her up in a spine-tingling kiss she never wanted to end.

Kayla squealed in his mouth when she felt Virgil pierce into her vagina with his enormous erection. The thing stretched and filled her so completely it drowned out every thought and stole her breath. Travis swallowed her cry as Virgil sank deeper into her pussy, slowly, moaning in sweet agony.

Travis groaned into the kiss, and the buzzing vibrated in her mouth, inciting a whimper.

Virgil's cock rubbed against something inside of her, making her eyes water as an unprecedented rush of pleasure flooded her senses. The sweltering stiffness of Jake's penis rubbed against that same place from behind. How could she possibly survive a dual assault on her G-spot?

Keith got on the couch and stood on his knees at an angle from her face. The wide couch enabled him to sit between the back of it and her. “You suck on me and use your hand to play with Travis. Concentrate on rhythm, but not if it's gonna stress you out. We'll enjoy you regardless. We just want you to feel what we do to you.”

Travis stood and fisted the root of his dick, giving her a naughty smile.

The blushing plum-head of Keith's cock knocked at her eager lips, sliding past her teeth when she opened her mouth for him. The decadent taste of hot man made the blood simmer in her veins.

A hot, fat erection pushed into her hand, and she held onto Travis, wanting to please him.

Jake screwed into her ass. Virgil drilled into her cunt. Keith stroked into her mouth while Travis thrust gently into her hand. Four cocks using her body. Four sinfully appetizing cowboys that wanted to touch her, love her, and pleasure her. She'd never felt so full, so feverish with lust, and so surrounded in her life.

Keith pulled his cock out of her mouth, sounding breathless and driven as the other three men pumped their erections faster in her cunt, ass, and hand.

“Say you belong with us,” Keith demanded.

I loved reading this book. it was long enough that you could get a good feel for the characters without worrying about the book ending too soon. I love how the heroine gets all of her men in the end. she went through a lot, and you get a feel of what she went through but at the same time you can see how it makes her stronger and helps her bond with her men after a very long separation. I am definitely looking forward to the next installment of this series and I hope that the story is just as long and insightful as this was. I loved reading it and didn&#039;t want to put the book down.

Sexy, sexy story, great characters, great plot, and I can&#039;t wait for next one!

Thought is was pretty good. Can&#039;t wait for the next book in the series.

Gentling the Submissive by Zoey Marcel