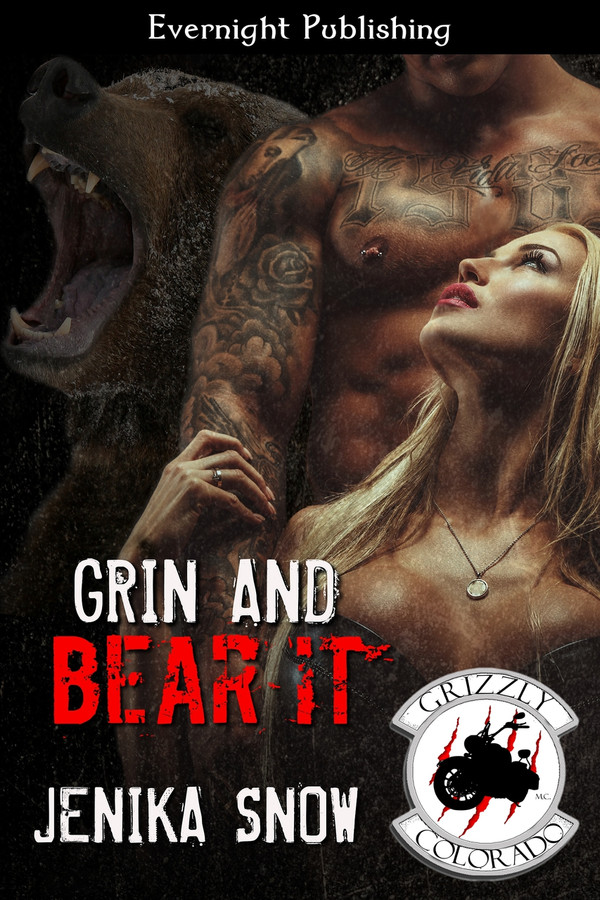 Even the strongest fall...

Mason’s always lived each day like it was his last, but everything is nearly taken from him when he’s injured. The only thing he can focus on is making sure the ones who hurt him pay with their lives.

Ryeissa can feel the wall Mason has built around himself. Being his nurse means she’s there to give him support, but she can see the darkness festering inside of him and fears he’s lost to his anger.

As the two become close, and Mason’s bear demands he take Ryeissa as his mate, he struggles with the need to shelter her not only from the violence and revenge he has to exact on the men who attacked him, but also from himself.

Can he push away his need for vengeance in order to be with her, or will he end up ruining the only chance he has of making her his?

He stared at her, looked into her blue eyes, at the fact she’d left her hair down and with the wind blowing it created this hot fucking scene. Her blonde hair moving along her shoulders and cheeks, the scent of her fruity shampoo filling his nose … all of it had his cock hardening. But he didn’t bring her here to fuck, although that was certainly on his mind. No, he’d brought her here to show Ryeissa that he wasn’t just a man, but an animal with every part of him.

“I really want to kiss you,” he said in a deep, but low voice.

She was breathing harder after he spoke, and he noticed that she looked down at his lips. They hadn’t done more than brush along each other, despite how much he’d wanted to kiss her, touch her, and do a hell of a lot of things to her that were far from being gentlemanly, but that’s who he was.

“Then why don’t you?” she asked just as softly.

“Because I want to take things slow with you, do this right.”

She lifted her gaze to his, and they stared at each other for several long seconds. “Maybe I don’t want slow, Mason.”

He groaned, his bear pushing forward, wanting to agree with her. The beast didn’t want slow either, but the man wanted to make this last, didn’t want to scare her away with how rough he could be.

“I want to do this right because I’m not just a man, Ryeissa, but an animal, too. I want you to fully know who and what I am before things—” And before he could finish speaking she had her mouth on his.

With her lips pressed to his, their breath mingling together, all Mason wanted to do was … do everything with her. He pressed her back to the side of the SUV, opened his mouth and took control of the kiss. He couldn’t help it, and neither could his bear. He wrapped his arms tighter around her, securing her to his body as he probed her mouth with his tongue. They stayed locked in that embrace for several seconds, both panting, moaning, and getting lost in this kiss. He was hard, so damn hard his cock ached, and his balls were drawn up tight. He knew if he didn’t stop he’d lose all control. He finally pulled away, looking at her, breathing hard, intense.

“Why’d you stop?” she asked breathlessly.

“Because if I didn’t I’d be liable to tear your clothes off and do things that you’re probably not ready for.”

When Mason got hurt he was so full of hate and rage and wanted revenge. But don’t let that fool you because he does have a sweet side to go along with the sexy alpha attitude. He meets Ryeissa while he is in the hospital. They seem to work together so good. I could see these characters as real people going through some crap and coming out the other end looking good. Overall, a great story.

Grin And Bear It is the eleventh book in the Grizzly MC Series by Jenika Snow. I have read every one of these books as I love the author’s writing style and the unique world that she created with the series. Each story has captured and held my interest and this one was more of the same with such an amazing love story for Mason and Ryeissa. I simply could not put it down for anything ! I loved the characters in this one. They were vividly developed and so heartbreakingly life like, especially Mason as he was so angry and troubled in the beginning. The author gave him a lot of emotional growth and settled him down throughout the story. The best aspect of the story was Mason and Ryeissa’s relationship. Not only the chemistry but more so the closeness of their bond. They were totally honest with each other about everything and I found it refreshingly romantic. The only conflict between them was Mason’s need for revenge, even then I felt it was more like she didn’t want him to do something that he would regert later. It just stuck in my mind about how open and tender they were and that I really hadn’t seen that in any other books. It was romantic and very much appreciated. As a bonus the plot was involved and had some other situations that was going on with some of the other new generation characters. I look forward to watching Jakob take that fall and hoping he will be as sweet as Mason turned out to be. I have to say that all of Jenika Snow’s books are hot and know that this one was no different. Mason and Ryeissa had great chemistry and the intimate scenes were sexy and wild, but I have to say it again, those times were sweet. These two were not afraid to say I Love You to each other. Mason started out as a hard alpha bear but he didn’t stay closed off for long. He was also a dirty talker so again this was another one of my favorite elements. You might say this book hit all the right buttons for me. As with all of Jenika Snow’s books this one was well written and fast paced. The characters captured my heart and the story kept me entertained all the way until the end. I liked how she was setting something up for the next book and gave me something to look forward to with another Grizzly MC story. I absolutely enjoyed this sexy and romantic book !

When Mason was hurt he was so full of hate and wanted to get revenge. Mason is a sexy alpha with a little splash of sweet. Ryeissa is a nurse that took care of Mason when he was in the hospital. The two together are perfect! Mason had my heart from the start. I loved Ryeissa and her sassiness!

When Mason was hurt he was so full of hate and wanted to get revenge. Mason is a sexy alpha with a little splash of sweet. Ryeissa is a nurse that took care of Mason when he was in the hospital. The two together are perfect! Mason had my heart from the start. I loved Ryeissa and her sassiness!

Great story Glad Mason got his happy ending with Ryeissa can&#039;t wait for the next book especially with the new b babies being born

Mason...my heart was so hurt for him. He was so full of both sorrow and anger after he was run down and nearly killed. His world began to be a swirl or regret, rage and fear of the unknown. Would ha ever walk again? Will he be the man he was once again? Ryeissa...Such a refreshing ray of sunshine to Mason&#039;s bleak world. The strong nurse who wouldn&#039;t bow down to his anger and attitude. Could she heal the man and beast and make Mason whole again? Can she be his key to happiness and help him be the bigger man? Can a mans love for his woman be stronger than the need for vengeance? This is my confession: Mason &amp; Ryeissa may be my absolute favorite Grizzly couple, if not my favorite all around Jenika Snow couple, period.

Mason is the next generation of the Grizzly MC. He&#039;s lived each day as if it&#039;s his last. His only thought has been of himself until he&#039;s almost killed in a bad setup. His life was almost destroyed and this gave him the wake up call he needed. As he&#039;s making his long road to recovery his main focus is making the ones who hurt him pay but Ryeissa may put a kink in that plan. His bear wants the sexy curvy nurse whose been supporting Mason on his road to recovery. Once he&#039;s healed will Madon give into his bear and make Ryeissa his mate or will he push her away for protection. Ryeissa is a innocent woman who has never been exposed to the gritty life that Mason has as a patched member of the Grizzly MC. Jenika Snow writes sexy hot strong alphas who fall for the quirky innocent curvy girl. If only this happened in the real world. Jenika does a great job of making it seem possible for the curvy quirky lonely girl to find her over the top hot alpha mate. Plenty of hot panty melting scenes and just enough action to keep you on the edge of your seat. I love all the Grizzly MC books and this one is another great read

This story is great shows the strength of a man and the love that comes from the heart I can&#039;t wait for the next one denial y I ur a master of words

Loved this!!!!!! Mason, pure Alpha, dangerous, deadly, loyal, and he was struggling to find what he needed. Until he meets Ryeissa, sweet, caring, loving, and has a wild side also. These two were perfect together, smoking HOT!!!!!! Mason, good god he was scarey sexy. Love this story love this series Amazing

This has to be my favorite Grizzly&#039;s book! I really loved Mason&#039;s story and how he fought so hard to win the woman he loved. Mason knew he wasn&#039;t boyfriend material, but he knew Ryeissa was the kind of girl that needed certain things. Soft things that he couldn&#039;t give her. While Mason is recovering from a near death attempt on his life he lusts after his nurse in the hospital. Ryeissa had no problem taking care of the massive bear shifter. In fact, the pleasure is all hers. They danced around their attraction until Mason was discharged, then they went their separate ways. Ryeissa thought that was the end of everything because she was too nervous to tell Mason how she felt. But that was only the beginning because Mason&#039;s bear wanted her and it would be denied. I LOVED this book! The whole series is a great mix of bikers and shifters. Brilliantly written by Jenika Snow &amp; Sam Crescent. A work of art!