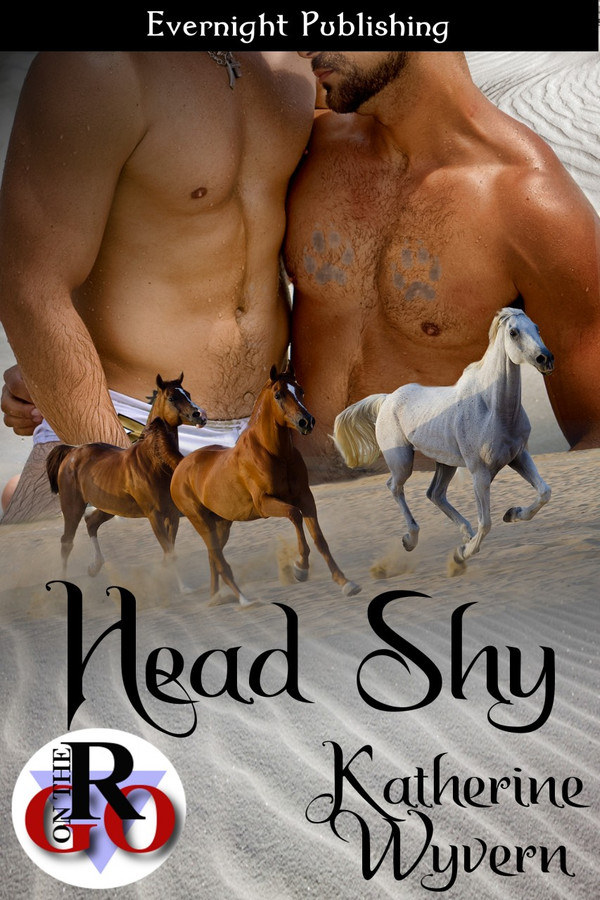 On the desert planet Cydonia, Lune, a naturalist and explorer, is assigned a new trainee. The young Rider is supposed to follow him everywhere to learn the skills of his trade.

Lune would gladly be spared the trouble, especially when informed that the boy has been formerly apprenticed to a vicious and abusive Rider, and likely to be difficult and traumatized. But when Laz’law, a stunningly beautiful, fiercely touchy creature enters his life, Lune has no choice other than to employ his horse-whisperer’s patience to earn his trust and win his love.

When Lune entered the small locker room by the stable yard he was a bit disappointed to hear the water running in one of the showers. He was tired, dusty and sweaty, and he really just wanted to scrub himself clean and then go home. The thought of meeting somebody and having to chat and be social made him feel vaguely sick.

He wondered who had stayed at the yard so long. It was a holiday, after all. He unbuttoned his shirt quickly and stuffed it into his locker, hoping to hide in a different shower before whoever it was came out, but it was too late. The water stopped, and the shower door opened. He turned to look and nearly keeled over senseless when Laz’law, of all people, stepped out of it. He had a towel around his middle and was dripping wet. He had a dark, combative look in his eyes, but he relaxed somewhat when he saw Lune.

Lune sat down on a bench and with some effort said, “Came to trim some horses. For a friend. Thought you were off with your pals.”

“Oh, no,” said Laz’law, “I didn’t go after all. Too busy. I studied, and then I came to play with the mare for a while. Trustworthy, see? And by now I can tell you anything you could possibly want me to know about every bleeding plant, beast, and bug that lives between here and Arnia. You’ll have to take me with you. I’m your living encyclopedia. You’ll need me.”

He flipped the towel off his waist and began rubbing his head with it.

“Mh-h,” said Lune, out of general considerations that this wasn’t a good moment to trust his voice. He watched Laz’law in something like a stupor while the young man rubbed the towel on his head, face, and throat. He was lean and sculpted like a racing thoroughbred, with not an inch of softness about him, and every muscle bow-string-taut under the shiny, wet, dark skin. His chest bulged out exactly enough, strong without heaviness; his stomach was as neatly and squarely lined as a chocolate bar, and his cock …

Laz’law took the towel off his head and looked at him.

“Come on, man, ask me any question! Test time!”

He swallowed. “I don’t know. Tell me about snakes, to begin with.” He bit his lower lip. Snakes? he thought. Can’t you be a bit more obvious, you demented old sucker? He crossed his legs tightly to keep his fast-growing hard-on from showing.

Laz’law launched into a fast-paced description of every living species of snake known on Cydonia, specifying size, coloring, habitat and distinguishing features. He did sound like a living encyclopedia. Lune wondered when he had done all this reading, but then, like so many other rebellious youngsters he had known, he was scarily keen when he put his mind to it.

“And these are the snakes you can eat,” Laz’law said proudly, before rattling out the whole bleeding list of them. Lune bent down to lean his elbows on his knees and his forehead on his palms, aiming for an overall look of weary but concentrated attention and peering at him sideways, from under his thumb. It would keep the bulge in his pants out of view, but he was going to die of it. He made a mental note to wear somewhat softer trousers next time he was around Laz’law.

Oh lord, he thought, shifting painfully, so this is the day I get a sprained cock, yes?

Laz’law stood there talking, exhibiting his nakedness now with the total forgetfulness of the true sportsman. He had toweled his breast dry, and his skin was like matte bronze. But some water still clung in the hollow of his throat, and one drop began a shiny descent along his torso, outlining every perfect bulge and groove of his chest and belly. He had two twin silver-derm tattoos on his chest, paw-prints of sorts, as if a particularly loving and artistic panther had dipped its feet in silver paint and then laid them on his breast, side by side. Lune swallowed again. Another drop of water ran down Laz’law’s body. He toweled the inside of his legs and his narrow, perfect hips. He passed the towel under his balls, and round his cock, which fell back and bounced around, inviting…

Brilliant! 5 fan-spook-tastic stars for this gem of a book. Ms Wyvern has a way with words that keeps you flipping the pages. Even in a quick read she manages to make me fall in love with the fleshed-out characters. I loved Lune and Laz&#039;law. My only beef is that the cover doesn&#039;t match the characters. ⭐⭐⭐⭐⭐

As with Woman as a Foreign Language, I love the poetic writing here. Today I was in the mood for a patient, healing MC, and Lune fit the bill perfectly. He&#039;s such a great mix of thoughtful, tender, and careful, while the messages Laz&#039;law writes are funny because he has the complete wrong impression about Lune. I wouldn&#039;t have minded a smidgen more of Laz&#039;law learning to trust again after past abuse, but that&#039;s the only downside here. (Full disclosure: without any understanding of the series world, I&#039;d have been lost. The author graciously filled me in so I could enjoy.)

Never judge a book by it’s cover. No one looks past Laz’law’s looks to see the being and capability underneath. He’s known nothing more than abuse, that is until he is assigned to be with Lune. By first appearances Laz’Law is sure he has just been dumped on some oldie to keep him out of trouble. He soon learns how a gentle hand can sooth not only a horse but the broken soul of a man. I was so excited when I read the blurb. Then I began to read the book and thought I’d made a terrible mistake but a few pages later and I’m happy to say that I didn’t. This is really a great find despite the slow start. The plot is unusual in that we are transported to a different planet and a different way of life. Though an abuse plot is not new the way it’s handled in this book is refreshing. There is no magic dick in this book that just happened to cure the abuse, but instead this book shows that it takes a lot of patience and understanding. I love Lune, maybe because I have someone in my life just like Lune who is very dear to me but I truly appreciate the aging knight character. Laz’Law carries a bit of attitude but it’s used to cover the vulnerability of a very thin skin. He’s been through so much that you just want to snuggle him. This book is a really quick but it doesn’t feel like it with all the dimensions added to it. Head Shy is a really steamy, enjoyable read.