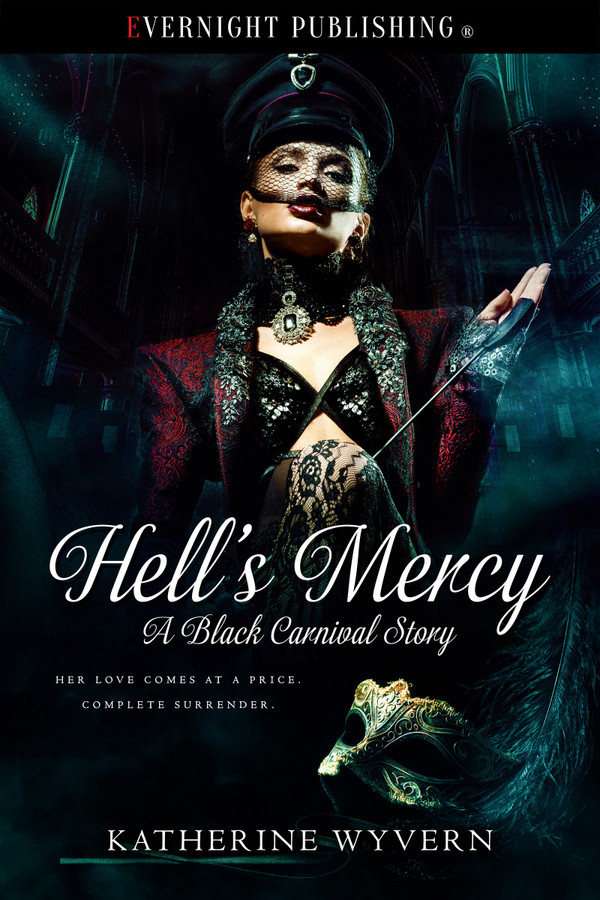 Wealthy, charismatic, influential, and damn near immortal, Lukan Løvensgård looks like natural Dom material, and, in fact, he has never, but never, submitted to anyone in his long life. But among all the bizarre and fantastic people roaming the far planet of Cydonia, there is one who has stolen his old, cold heart.

And her love comes at a price—complete surrender.

With her impressive presence and unusual equipment, Helenay is the hottest and trendiest professional Domme in Neu Venedig, and she hardly has the time to top for pleasure these days. But she knows what her old friend Lukan needs, something he never suspected.

He knew all her favorite toys by their sting, and the sound they made when they met his flesh.

Helenay slapped the split strap of thick leather hard on his buttocks and then down his thighs, in a neat crisscrossing pattern. She could leave crisscross switch welts as neat as a corset’s lacing if she wanted. At his knees, she stopped, and Lukan breathed deep. The sharp sting of the tawse was pure fire, but it faded quickly enough. Still, his skin was now definitely well primed for the real pain.

Hell placed a hand between his buttocks and stroked the edge of his butt plug again and again, sending it to stroke his prostate, over and over, while at the same time, gently pulling on the cord that tied his cock and balls. He groaned, feeling waves of pleasure and the afterglow of pain mingling in his flesh and in his brain, addling him. Soon he would hardly know the difference between the two. He groaned again, not knowing anymore if he had come for the pain she could give, or the pleasure she so often withheld. Sometimes she would give both. Perhaps he would beg for it today.

Yes, he would certainly beg if he had to.

“Turn,” she said, and he let go of the wall, gingerly, because his knees were soft. Her tawse was still in her hand, and from one end of it, on a thin silk cord, hung a long suede tassel. Not quite a flogger, but a vicious enough little thing, when one was standing naked with a swollen glans reaching out, begging to meet that deceptive velvet kiss. He took a deep breath and then gave a sharp gasp when the first soft swish of the tassel hit his engorged cock. The suede was neither rough nor stiff, but his stretched, blood-filled skin exploded in pain at its kiss. The pain was so close on top of the pleasure he had been savoring a moment earlier that he could not quite tell them apart. The almost-gentle, almost-intolerable flogging went on and on, perhaps for only a few seconds, but he was jolting back at each blow, crying out, whimpering. When she stopped and palmed his balls again, he actually screamed, although she did nothing, just held them.

“You are so full of it today,” whispered Hell, seriously.

“It” was the unbearable tension that mounted inside him between their encounters, as he knew well.

He shook his head wretchedly. “I don’t know. Help me. Help me, please.”

She sighed, and kissed his forehead for a long moment.

Moments like this, long or short, made his heart stop. Neither he nor she were made for tenderness, really. And yet it materialized, from time to time, out of the blue, unexpected, unexplained, often unacknowledged. Half the time, they almost pretended that it hadn’t happened. A secret they kept, even from themselves.

Lukan is rich. Healthy. Powerful. He has no excuse for being depressed and no reason to cry, and no wish to do such a thing. And yet he needs to, from time to time. Luckily for him, there&#039;s someone who can give him that. This short story is pure splendor, set in an exquisitely crafted universe and depicted with finesse, very atmospheric - and hot, hot, hot!