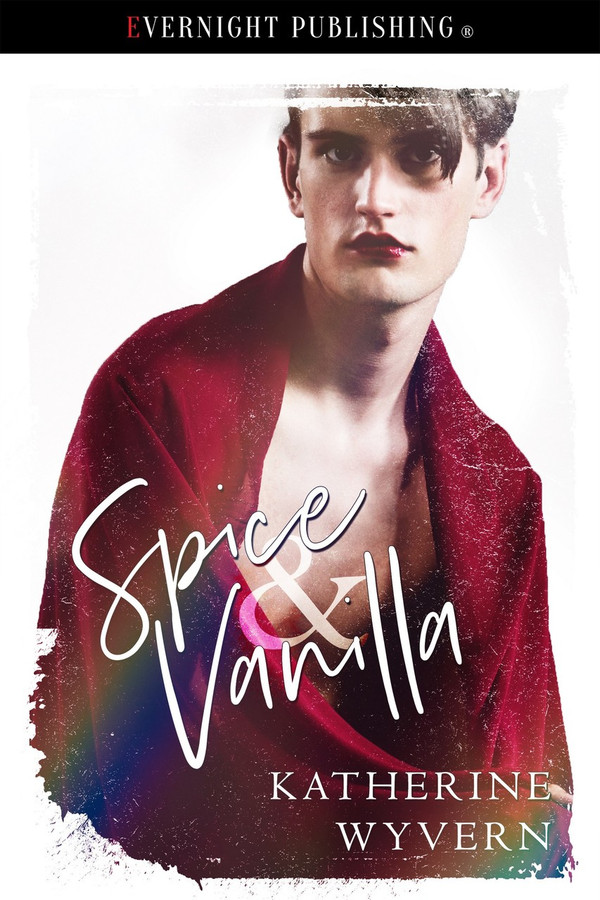 Well concealed under a sarcastic, spiny hide, Hugh has a darkly romantic, passionate soul. Torn between love and terror, he’s held the talented, elegant, magnetic Raphael carefully at arm’s length since the day they met.

Male or female, men or women, kinky or sweet, top or bottom? Angel or devil? Raphael’s life is a string of unanswered questions. And Lucie, his long-hidden female self, may bring it all together or destroy everything he has, whether with Di or with Hugh.

Hugh watched him stroking away with great contentment. He was totally worn out after a crazy day at work, and it was not always easy to find the energy to satisfy such an enthusiastic masochist. There were days when he wished Raphael were a bit less fond of being spanked and whipped, but he always did his best to oblige him. The thought of his Raphael going out there looking for release from God-only-knows-whom, and getting hurt for real by some less scrupulous or talented Dom was just unbearable. Still, tonight he would lie back and relax. Mostly. I will have to help him eventually, he thought with a slightly evil grin, but I can take a breather first.

Raphael stroked in perfect tempo. He was one of the most technically exact musicians Hugh had ever played with, after all. Too exact, in fact.

It would do him so much good to let go a bit, to just go with the flow, be wild and imprecise and purely passionate. Then he would not need so much of this.

Tick—tock—tick—tock—tick—tock went the metronome, and Raphael stroked and stroked. It was a good while before Hugh could tell, from a small furrow between those blond eyebrows, that the unchanging, slow rhythm was beginning to frustrate him. He smiled a bit wider and said nothing, devouring his beautiful quarry with his eyes. He watched, entranced by the fluid play of flesh and skin as Raphael’s long pale cock, a nice ruddy purple by now, sank and reemerged into and from his fist, the velvet-like foreskin lapping beautifully over the shinier, silky glans, the testicles bouncing softly to the rhythm as the scrotum was pulled up and released. It was hard to resist the temptation to throw the whole scene to the devil and just take that cock in his mouth and suck it empty.

This is without exception the best use a metronome was ever put to.

Raphael’s body was developing a number of small, charming tics and twitches. He briefly lifted his left knee from the mattress then relaxed again. His right wrist was pulling on the strap from time to time, and his breath was coming in slightly ragged bursts.

Still it took a long time. Too much control, thought Hugh, smiling. Tsk-tsk.

He slowly unfolded his hands and moved to sit between Raphael’s legs. He spit on his middle finger and watched Raphael’s face, half hopeful, half anxious, as he slowly approached his anus. He didn’t hurry. He let Raphael wait for it. He would beg, in time, Hugh knew, but there was no need for that, not yet. He finally pressed his fingertip to the twitching, tight, live rose of flesh and felt it jolt and spasm. He massaged it in circles, with relish, and didn’t even try to penetrate it. Raphael was shaking all over, trying to press down on his finger, but there was just so far he could stretch, tied as he was. His belly muscles went taut. They were contracting in random, jerky convulsions. Hugh had never seen anything so beautiful.

Then Raphael missed a beat. His hand had picked up pace, ignoring all orders. Raphael whimpered, trying to compensate to get back in the right tempo. The double change of pace made him squirm all over. He swallowed twice and missed the beat again. This time Hugh slapped the inside of his thigh, very hard. Raphael could take a long regular series of well-spaced blows with relative ease, but a single hard slap coming down out of the blue like that drew a ragged cry from him.

“You do know what tempo means, I asked?” Hugh said, in a plain chatty voice. He had never had any taste whatsoever for histrionics. He was not, he had never been, a theatrical Dom. He wasn’t in it for setting up a show. He just got the job done.

“Yes. Yes!” said Raphael, a bit frantic. He managed to stick to the rhythm for a minute longer, until Hugh gently stuck his finger just within the ring of his anus. All of Raphael’s body twisted, and he lost all track of the cold, mechanical rhythm of the metronome.

And that is exactly what you need, my love. Too much playing by the rules, too much fucking control. You need to find your own tempo, and just let go.

Five or six fast hard strokes followed. Hugh slapped him twice, on his thigh, and, when he turned suddenly, on his butt. And then Raphael came, on the third slap, as he flopped flat on his back again, crying out in pleasure or pain, or both. It was hard to tell. Semen spurted out in beautiful, long, arched white streamers, splattering over Raphael’s belly, chest, and even his face.

It is difficult to aim while being spanked hard.

He was so naked. So vulnerable, so unguarded. Hugh, who felt, every day, that he might shatter like glass, on Raphael’s unearthly, impossibly graceful, self-possessed beauty, lived for these moments, to watch him released of all self-consciousness and all bonds. Strange, how it took a bunch of leather straps to get him to do that.

“Ah, oh, shit. That hurt,” Raphael whispered after a minute. “Not complaining, mind,” he added, with a small edgy laugh, wiping some drops of sperm from his lips and eyebrow.

“Good,” said Hugh, quite composed, despite the erection straining in his pants. Watching Raphael twitching and jolting while covered in glistening semen was not a sight to leave him unmoved. He reached out for the metronome, stopped it and lowered the weight a tad, then started it again.

This was a faster, business-like tempo.

“There you go, hot lips,” he said to Raphael, who was still breathing hard from his orgasm.

Hugh gave him a small, devilish smile. Raphael was perfectly capable of coming two or three times in one night, but, like most men, he needed a while to recuperate in between. Well, tonight, he wasn’t getting it.

“You didn’t think it would be that easy, did you?”

Ms. Wyvern writes a story about Di. A girl who had a brilliant future in front of her. Then tragedy struck and now Di has a cane and can no longer dance. What will Di&#039;s future bring her now that she can no longer journey upon the path she had planned? Raphael falls for Di. He saw through her to her beautiful soul. Di falls for Raphael also. Both are very beautiful, no matter what side they present. But each has secrets that are revealed. I won&#039;t share them all. But Raphael still holds another secret. He is a cross dresser. He sometimes dresses in woman&#039;s clothes and becomes the beautiful Lucie. Can they all exist in each others lives? Ms. Wyvern finds a way to bring each one into the others life and make each of their characters charming and understanding of each others desires.

Very vivid characters, conflicted and believable. I&#039;m particularly charmed with Hugh, despite his grumpiness, or maybe because of it. All true romantics are a bit cynical :)

You only have to read the first two chapters of Spice &amp; Vanilla to know that this is not your typical erotic romance. Within the space of just a few short pages, Katherine Wyvern introduces us to four characters (in three bodies), moving effortlessly from a melancholy meeting with a late-night busker, to the scene of a damaged woman who can barely drag herself out of bed, to an oddly romantic encounter of spanking and domination, set to a classical piano concerto. I loved the fluidity of this, my second literary dance with Katherine, and the way she so deliberately establishes such contrasts - which, ironically, serve to blur the lines between characters. Scars are an important part of the story, both physical and emotional, serving as reminders of pain best forgotten, or as punishment so sweetly craved. It is gender, however, that she so deftly explores, interweaving themes of identity, expression, sexuality, and acceptance. Although we, as readers, know that Raphael and Lucie are one and the same, it is not until the halfway mark that she chooses to reveal herself to Di, leading to an altogether different exploration of scars and pain. Having had his female side rejected by the woman he loves, and discarded as a sissy fetish by the man he loves, Raphael purges all evidence of Lucie from his life and slides into a deep depression. It hurt reading those scenes, with Hugh&#039;s dismissal hitting me the hardest. Casual readers may not understand the gender dynamics enough to really appreciate it, and others may bristle at how even those who love us can so wholly misunderstand, but Katherine manages to speak volumes about how we see, accept, and appreciate gender, without overwhelming it with any sort of narrative commentary. I will say no more about the story itself, except to assure you that this is an erotic romance, and our hearts are intended to soar, not break, by the end. That tipping point of pain and rejection is crucial to moving the story forward, and actually serves to lead to an ever great, more significant exploration of gender and love. The characters here are absolutely wonderful, the use of music is delightful, and the slow reveal of secrets, memories, and pasts helps to give it all depth and resonance. As the title suggests, this is equal parts Spice &amp; Vanilla, and those dual elements only work so well because Katherine understands, appreciates, and embraces them both.

This book was hard to put down for more pedestrian concerns like eating. As I&#039;ve come to expect, the writing was amazing. Katherine Wyvern can turn a phrase with incredible skill. I particularly appreciated the sensitivity to Raphael/Lucie&#039;s coming out and its impact on others. It&#039;s easy to have a stock transphobic villain react badly, but in this case, there were no villains, no saints, just imperfect people reacting, stopping to think, and reconsidering. This approach makes it very real and human. The poly angle fell into place so easily, and I&#039;d have liked to see maybe a touch more exploration in that regard, but it&#039;s not stopping me from giving a full five stars.

I LOVED Woman as a Foreign Language and didn&#039;t think Ms. Wyvern could top that story. Well. I was wrong. S&amp;V goes beyond, pulling in a third party, giving us some hot M/M lovin&#039;. The acceptance and unconditional love given by these characters is admiral, the kind I wish the world would embrace with everyone - ALL. Heartwarming, panty-melting, luscious, and poetic, this story will satisfy in ways you never imagined. A full five star, thumbs up! *I won a giveaway copy in Ms. Wyvern&#039;s release party.