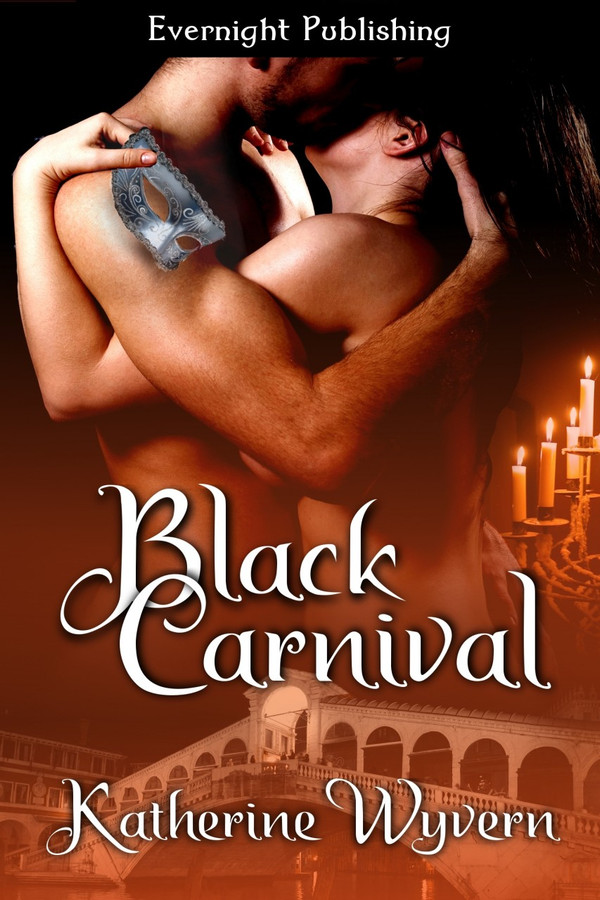 The city of Venice has been rebuilt on the far planet of Cydonia. Despite the uneasy presence of the mysterious, only part-human Sand Riders who roam the Cydonian deserts, The Black Carnival has become a celebration of beauty and lust known all over the Galaxy.

It’s a labyrinthine tale, a quest through all the sensual temptations of a carnival, through exquisite debauchery and emotional turmoil, past masterfully staged scenes, mesmerizingly numerous, and a vivid array of masques. For the heroine, it’s a self-discovery trip, in a way, a chase after something she can’t define until she sees a familiar figure flowing in and out of the crowd on the other side of a canal.

This book is so extraordinarily good, I’m afraid that my simple words won’t do it justice. I’ll still give it a try: It would be easy to label Black Carnival merely as a sex manual, thanks to its extensive explorations of different sexual positions, tools, and “tastes” – from tender sensuality and romance on one side to near-sadistic games on the other, and everything you can think of (or haven’t, until now) in between. It is all narrated and explained in such length and graphic detail, don’t be surprised if at the end of each chapter you are in sweat, panting, repeatedly brought to climax by the spectacular depiction of the author’s imagination. But there is more. There is art, the art of mastering the written word. Like the huge, glowing painting screen in Lukan’s home displaying a new magnificent mythical scene each time Ivory comes to visit, every scene in Black Carnival is an art tableau carefully and skillfully painted by the author. I’ve rarely read a book whose colorful settings as well as character actions and wide palette of urges, emotions, and senses are so vividly brought to life, I am immersed in the story and seeing (feeling) it unfold like a motion-picture. In fact, should I be asked to pick a book to be adapted for the big screen, Black Carnival would be an obvious choice. Just remember to bring a fan (or your boyfriend).

“My dear, there is nothing, nothing, more sexy than this.” This line, in Chapter Two, says everything I want to say about this book, Black Carnival, which is Ms. Wyvern&#039;s debut novel. Welcome to Cydonia, a colonized planet far from the core worlds, and its major city, NeuVenedig, built in the style of old Venice. But if you think this is a science fiction story, think again! This is the story of Ivory Blake, a stifled artist who needed an exciting get-away, and that&#039;s just what she gets. In this first-person narrative, Ivory is hired for a job off-planet, a gig where her artistic skills can be put to good use beyond the sterile landscaping company she works for, and that&#039;s where the fun begins. Fun? Yes, fun – not only with hot, creative sex scenes but also with the way Ms. Wyvern uses words. If Ivory is an artist, then the author is her muse, inspiring her to paint vivid scenes in gripping exposition that leave the reader with no question about what her first dinner on the new planet tastes like, how classic paintings are altered into tasteful erotica, or what the colony of NeuVenedig looks, smells, and sounds like. Ms. Wyvern doesn&#039;t just write words; she paints with them. Ivory finds herself smack in the middle of the Black Carnival, an near-endless masque of night revels that continues until the sun comes up – which it doesn&#039;t for several weeks. There&#039;s one perk of this new planet: Ivory can enjoy herself to her heart&#039;s contentment. She may have been shy to start with, but she opens up to all the sexual possibilities that the Carnival and its merrymaking sex aficionados have to offer. And the reader is along for the ride – a wild, erotic ride without inhibitions and without shame. But the problem is that Ivory falls in love with Lune, and she realizes that it is not the pleasures of the Carnival, per se, that she wants but rather this handsome and exotic Sand-Rider. Lune is from an artificially-bred race, not quite human, and Ivory finds that she is not allowed to be with Lune outside of the Carnival. His breed is not allowed in the cities, and humans are not allowed out. Black Carnival is light on plot, but that&#039;s not a bad thing. Ms. Wyvern writes beautiful prose, descriptive set-pieces that show the reader the world and all that is in it – including the people and their amorous encounters. For people tired of reading the same banal dialogue and seeing the same stereotypical characters popping up again and again (like me!), Black Carnival is a refreshing change. I didn&#039;t just read this book; I lived every scene with Ivory. That&#039;s how good Ms. Wyvern&#039;s writing is! I highly recommend this book.