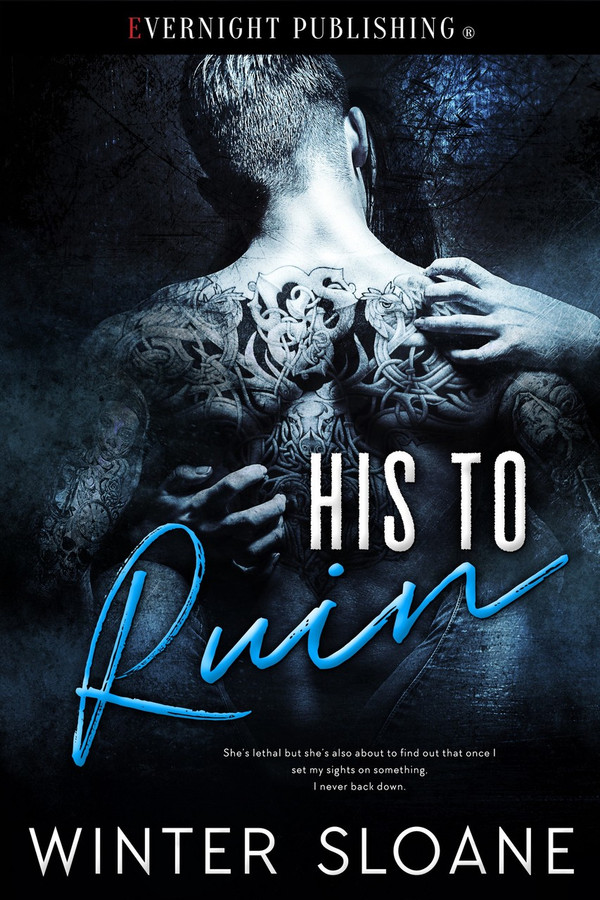 Sasha: My father, the head of the Petrovic family, locked me up in a thirty-floor glass tower with one hell of a view. He tells me it's for my own good, it's to keep me safe from his enemies. What he’s really done is clipped my wings and put me in a prison of his own making.

Nikolai: I break. I take. I’m no one’s prince and I exist to collect a debt long over due. Stealing my enemy’s most treasured possession is all I've ever dreamt of. But I can’t break what’s already been ruined. This broken princess has a way of getting under my skin and stirring life into a heart that’s already dead. She’s lethal but she’s also about to find out that once I set my sights on something, I never back down.

He caged her against the wall suddenly, gripped her wrists above her head, only to hold her the way he did the night before, fingers spread over hers.

Her heart hammered as those faded green eyes bored into hers.

Anger turned into something else. Desire surged through her veins as he closed the distance between them, and he dug his jeans-covered erection against her pants. Her body gave her away, and all her mental defenses fell. Without a bra, he could probably see her tits poking out of the shirt.

“I’m not,” she blurted, face heating.

His words got to her though, sinking deep into her bones. All her life, Maxim had berated her, reinforcing the notion in her head that she was fragile, breakable. If she took a step into the outside world, she wouldn’t survive. Her encounter with those two men proved her father’s point, and yet here was Nikolai, telling her different.

Keeping one hand locked on her wrists, he used his other to undo her jeans. The denim slid down her hips. He slid his hand past the waistband of her pants. She moaned, chest heaving as his fingers found her slick pussy.

He rubbed her clit, ran his fingers over her cunt lips, and shamelessly, she rubbed her groin against him. Nikolai smiled as if that proved his point about her wanting him. “Get yourself off in my hand.”

The crass words halted her. She blushed. From another man’s mouth, those words might sound crude, degrading, but Nikolai told her the night before not to be ashamed of her desires, didn’t he?

“I’m waiting, baby. Show me how desperately you want my dick in you and I might just reward you for being a good girl.”

God. Nikolai said whatever he wanted, didn’t he? Yet, Sasha preferred blunt honesty to endless lies and deceit. He gave her clit a pinch, and she groaned, beginning to rock her hips back and forth. She rubbed her pussy against his rough, callused hand, getting wetter each time she did it. The pressure in her core began to build. Her tits felt ultra-sensitive. It felt good, rubbing them against the hard wall of his bare chest.

He released her arms, and, needing to hold onto the sheer strength of him, she clutched at his biceps, panting as she stroked herself on his hand faster. She let out a scream as he slid two fingers inside her. Sasha climaxed, mind shattering as she came. She looked into those hungry eyes and begged him. “Fuck me like you own me.”

With the devil in his smile, he answered immediately, “You already belong to me.”

This had a tad bit of a twisted start to say the least. Sasha is the princess in the tower to the outside observer, but in reality she&#039;s in the prison her father keeps her in. As in, she hasn&#039;t been out of the apartment in years. Nikolai sees her as a pawn in his mission of revenge, until he realizes she&#039;s in danger from the one who should protect her at all costs. My boring little life never looked better after reading this. Both Nikolai and Sasha have been exploited and abused by family, and both have twisted foundations to build their lives on. Fortunately, that makes them the ideal match for one another. The book moved along at a pleasant pace, had a few surprises I didn&#039;t see coming, and the evolution of Nikolai and Sasha&#039;s relationship from captive/jailer to lovers seemed organic. This was a short read but kept me reading to the end.

Once I started reading this book, I couldn&#039;t put it down. I thought the characters were great, and the storyline was intriguing. I hope the author decides to write more books like this one. I will definitely be checking out her other titles.

New author for me a I really liked it. 100 % safe A little dark great alpha H and the h was great too. She had a back bone

His Dirty Girl by Winter Sloane

Staking His Claim by Winter Sloane