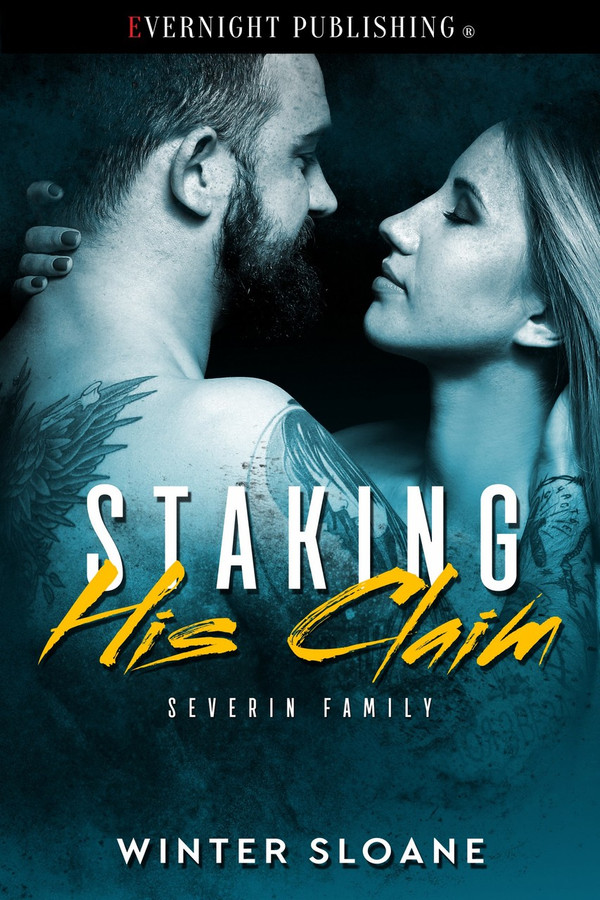 Ryker: I first laid eyes on her ten years ago, naked, bloody, and thrown away in a black garbage bag. The moment she gripped my leg and didn’t let go, I knew. I’d kill three men for this woman, even my own fucking brother. No guilt. No remorse. Sky is mine. And letting her go was the hardest thing I’ve ever done.

Sky: Ryker tore my heart right in the middle years ago when I told him I loved him. For years, we’ve kept our distance but he’s the first man I call when I’m knee deep in trouble. Ryker’s killed for me and he’ll do it again. He’s feared by his enemies, respected by the other members of the Severin Familia. To me, he’s always been one thing. My man.

“There’s no need to hold back anymore,” she told him. “I’m yours. I’ve always been yours.”

“Mine,” he said, turning her so she faced him. He repeated the word, this time with more certainty, as if it were fact.

He edged her towards the closest wall. Sky froze, unprepared for what he did next. Ryker knelt in front of her, but there was no mistaking who was the one in control here.

“Lift up your shirt,” he ordered.

She shivered, then did as he asked and pulled up her favorite sleeping shirt—which was one of his old shirts. She blushed. At this angle, he could see her bare breasts and how her nipples pebbled for him.

Sky sucked in a breath as he reached for the hem of her panties and yanked them down, exposing her cunt. Sky was relieved she had shaved down there two days ago. Never before had she felt so exposed, or so sexy. Her experience with sex was limited—Rodney pumping in and out of her in the dark before exploding into the condom and leaving her completely unsatisfied. Sex had been uninteresting to her, scary even.

With Ryker, she felt like he’d introduce her to a whole new world of pleasure.

“Such a pretty pussy. I’ve dreamt of this, of eating you up, hearing your sweet cries and wondering how you’d taste.”

God, even his mere words turned her on. She parted her legs wider for him, allowing him further access. He gripped her thighs firmly, before leaning in close enough so his day-old stubble brushed against her smoothly shaved mound. Then Ryker stuck out his tongue and flicked it over her clit.

Sensation flooded her body as he closed his mouth over the sensitive bud and sucked on it. She gasped, eyes wide as he took his fill, licking and exploring her pussy lips with intense concentration on his face. God knew she’d fantasized about this, about Ryker between her legs, rendering her unable to think. Was she dreaming?

Ryker worked hard for the Severin Familia and protected his little brother, River, as best he could. But when River goes off the deep end Ryker knows there’s no going back. Taking care of Skylar was a double edged sword. To Ryker she was an angel, innocent and pure and it was instinctive in him to protect her. Yet Ryker didn’t want to bring Skylar into his dark and dangerous world. While Sky tries hard to set her life on a different course, she eventually has to admit that Ryker is the only man for her. Can she convince him to stake his claim on her? I found this to be an intresting and character-driven sexy story. I was pleased the author took some time to introduce both Ryker and Skylar’s characters as this gave me time as a reader to get invested in them. This also helped me not feel like they were rushed together into their sexual relationship and skimp on the plot. Once Skylar returns to the city – all of Ryker’s patience is at an end and their relationship progresses pretty quickly. I did like, though, how the rest of the familia didn’t fade too far into the background. While a quick and short read, I felt the characters here really shone. Interesting and complicated Ryker and Skylar in particular didn’t feel like cookie cut-outs. For my tastes, I feel there could have been a bit more descriptiveness in the sex scenes, but overall I thought this was a well balanced story with sex, interesting characters and a good level of plot. I’d happily read more by this author.

His Dirty Girl by Winter Sloane

His to Ruin by Winter Sloane