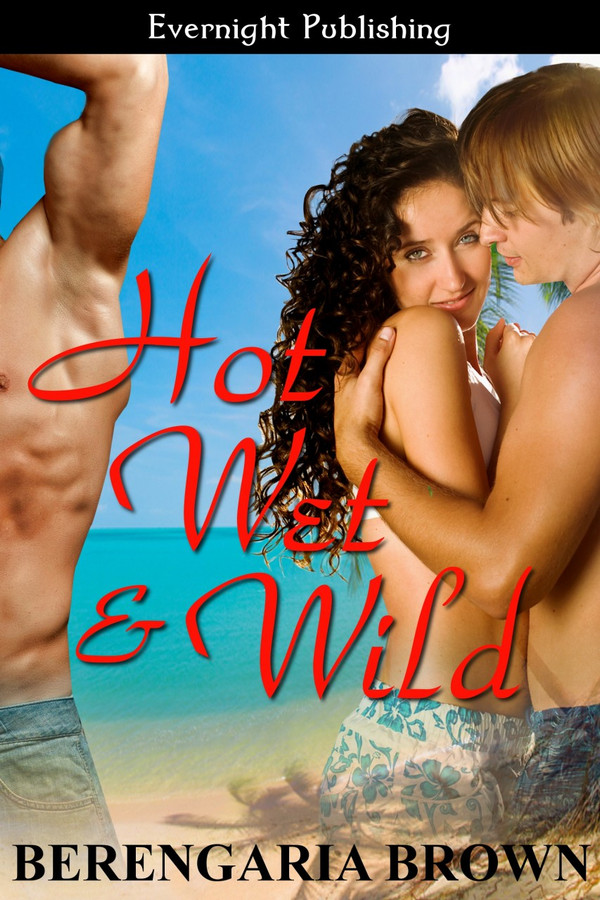 Gwyn moves down to the beach, and once again, she has a hot thing going with Zac and Parker. But then she gets a series of legal letters about her house, her garden, and her lifestyle. Clearly, someone doesn’t want her there.

Some expensive equipment goes missing from the golf course where Zac’s a groundsman, and he’s let go from his job. Parker and Gwyn try to soothe him with mind-boggling sex and help him search for the missing equipment. Their love sustains him, but who's responsible?

Parker hopes the three of them can move in together and be a real family. Will they ever be together for more than the occasional wild night?

As soon as he entered the bedroom, Parker shoved him up against the wall. Eagerly Zac spread his legs and pushed his ass out. Oh hell yeah, he liked it when Parker got all bossy and dominating like this.
Zac rested his head on his folded arms, and wiggled his butt as Parked slid a slippery finger deep into his anus. Ah yeah.
“Ping his prostate, Parker. Let him know we mean him to come very hard more than once tonight,” suggested Gwyn.
Hell!
Parker’s finger twisted and turned, then— “Freaking Hell!”
“I found it,” said Parker unnecessarily.
“I’m ready. Let’s—” Zac turned to walk across to the bed, where Gwyn was sitting naked, cross-legged, watching Parker arouse him.
“Not yet.” Parker pushed him back to face the wall and slapped his ass. Twice.
“Ouch!”
Zac wouldn’t have believed his dick could get any harder but it did. Then Parker’s fingers were inside him again, twisting and turning, massaging his channel, stretching the opening, making him hotter than hot. Pre-cum filled the eye of his dick and he was more than ready to drive it into Gwyn.
“Have a heart, you two. I’ll be jerking off all over the wall in a minute!”
“Okay. I’d hate you to damage my new paintwork.”
Parker slapped his ass one more time then let him scramble onto the bed.
Gwyn rolled onto her back and held out her arms to him. Oh yeah. It was like coming home, sliding over her lush body. Her skin was warm and soft, tanned from her hours on the beach except for a paler section around her breasts and low down on her belly. Her muscles were firm but her body feminine and rounded in all the right places, her softness the perfect contrast to the hard walls of muscle that defined Parker.
He grabbed the condom that was dangling between two of her fingers and hastily rolled it on. God, he wasn’t sure it’d even fit. His dick had never been this big, this hard, before. Finally he was covered and he slid between her legs, holding his cock to her opening, then shoving in, deep, hard. Ah God, so freaking fan-fucking-tastic.
Zac slid his hands under her shoulders, pulling her upper body hard against him, loving the way she rubbed her breasts against his chest. Every move she made was so sexy. If he wasn’t careful he really would come way too soon.
Zac bent his head to nuzzle Gwyn’s neck, then licked her skin. She tasted so feminine. Even after they’d been surfing and were sandy and salty, she always had a special, faint, girly flavor he really loved. He licked inside her ear, then sucked on the earlobe. Her cunt was hot and wet, but as he sucked her earlobe he felt more of her cream bathing his cock. Ha! She liked that then! So he did it again.
Parker’s cock was nudging his ass. Zac was tired of all this foreplay, so he held Gwyn’s ass keeping her tight against him, then slammed his whole body back on Parker’s cock, driving his fuck-buddy deep into his ass until he could feel Parker’s balls jammed against his own skin.
“Shit! In a hurry, man?” gasped Parker.
“Just giving you a hint.”
Gwyn giggled, her laughter bouncing against his chest, making his cock swell even more inside her.
“Let’s get this show on the road,” said Zac.