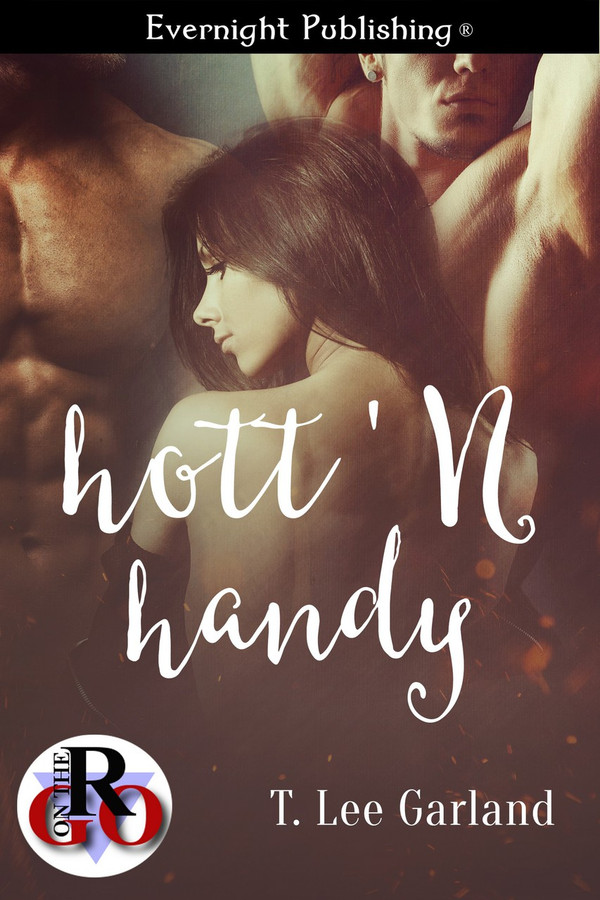 Shelby Barton was America’s TV darling having grown up in the public eye on a much beloved soap opera. Until the day she was fired. Embarrassed, she flees to the tiny town of Nugget Knob, West Virginia to hide out and decide what to do next. She purchases a rundown house and plots her next career move.

Adam Hott and his best friend Eli Handy are firemen who also run a home repair business, Hott ‘n Handy repairs. The two take one look at the beautiful starlet and know they want her in their bed and in their lives.

Shelby has a decision to make. Was home in New York, complete with the backstabbing people and her glamorous career in daytime TV? Or was home in little Nugget Knob, West Virginia, between two hot and handy men who adored her?

She had a wicked little grin on her face. Her pretty blue eyes sparkled with laughter. Adam got the distinct impression that she knew what he was thinking. Of course it was a little hard to hide as he reached down to adjust his cock that was as hard as a damn rock and nearly busting out of his pants. Shelby’s amused eyes followed the movement of his hand.

“Problem?” she asked with a curious smile.

“No ma’am, nothing I can’t handle.” He grinned sheepishly, right back at her. Damn, she was cheeky and he liked that about her.

She surprised him by stepping closer. Close enough that he could smell her perfume, something light and citrusy. Close enough that her nipples grazed his chest. She leaned in closer still and Adam leaned down. He focused on her lips. They were pink and plump and, at that moment he wanted nothing more than to taste them. He wanted to get lost in all that hot pink softness. Maybe even have them wrapped around his cock. Fuck yes!

“Well then, if you don’t need me to help you handle anything. I’m going to get dried off and changed.” She slid right past him, her lush body brushing up against his, leaving him feeling scorched by her touch. Adam watched her walk away, her round ass swaying from side to side.

She sure put on one fine show.

Now that looks like my kind of trouble. Adam turned and headed for the front door. He wanted to grab his Shop-Vac in his truck to get the water up from the kitchen floor. He ran into Eli studying what was left of the sad remains.

“That, I assume is your big-ass footprint?” Eli questioned with a snort.

Adam shrugged. “Should I know that name?”

“Shelby Barton, the beautiful actress who was on The Light of my World for like the past ten years? How the hell can you not know her?”

Adam rolled his eyes. “Got it, that soap opera you watch when the rest of us are cleaning equipment at the station and you’re supposed to be fixing us lunch?”

“Can’t be, what would a famous actress be doing here in little Nugget Knob, West Virginia?”

“I can answer that one for you, boys.”

They looked up to see Shelby standing in the doorway. She had changed into a dry pair of jeans and another t-shirt. Her dark hair was starting to dry and fell in soft, thick waves around her shoulders.

“They killed me off. I asked them to. I was getting so burned out after ten years. Besides, I wanted to do something different. I’ve been on that show since I was sixteen.” She shrugged. “It was time to go, I guess.”

Shelby tossed her hair over her shoulder as she continued, sending her tits bouncing. Adam didn’t know about Eli, but he was having a hard time concentrating on what she was saying. Though, he did wonder why she looked so sad about it, since it was her decision to leave.

“I like to paint but I need quiet to do it. I found this place online and bought it. Seemed like a good place to hide out and do what I love.” She shrugged and once again Adam was aware of the fact that she wore no bra, as her tits jiggled with every movement. Braless must be a thing wherever she lived. He was definitely an admirer of the trend. Adam was a tit man, whereas Eli was all about the ass. That was why they made such a good pair. Why they could share a woman without blinking an eye.

Shelby had everything, she was America’s TV darling; until it all came crashing down. Unable to stay in New York, she buys a rundown house in West Virginia and runs away to lick her wounds and figure out what to do next. Friends Adam and Eli run their own home repair business when not fighting fires. They take one look at Shelby and know she must be theirs. Will Shelby decide to go back to what she knows, fame, backstabbing friends, and the glamour of New York? Or will she decide that her home is between two hot and handy men who want to give her the world? Review: I love a good ménage, in fact, that’s what drew me to this story. I will say I was not disappointed! Ms. Garland does an excellent job of making not only you, but your e-reader sweat with all the steaminess coming off of this book. I fell in love with Adam and Eli and wish they were real so that I could have a chance at them! Shelby was really well written as well. I thought she was a great character and, although she was a movie star, she was relatable. I think that the plot was smooth and there weren’t any awkward moments are times when things didn’t make sense. The opening really drew the reader in and the ending was a perfect happy ending! It was well written and the pace was just right for a Romance On The Go. So it’s not exactly long, but it’s long enough to have a thorough plot and not feel like the reader is missing part of the story. I recommend this book for lovers of ménage romances and if you’ve never read a ménage, do it! This one is a great book to get your toes wet.