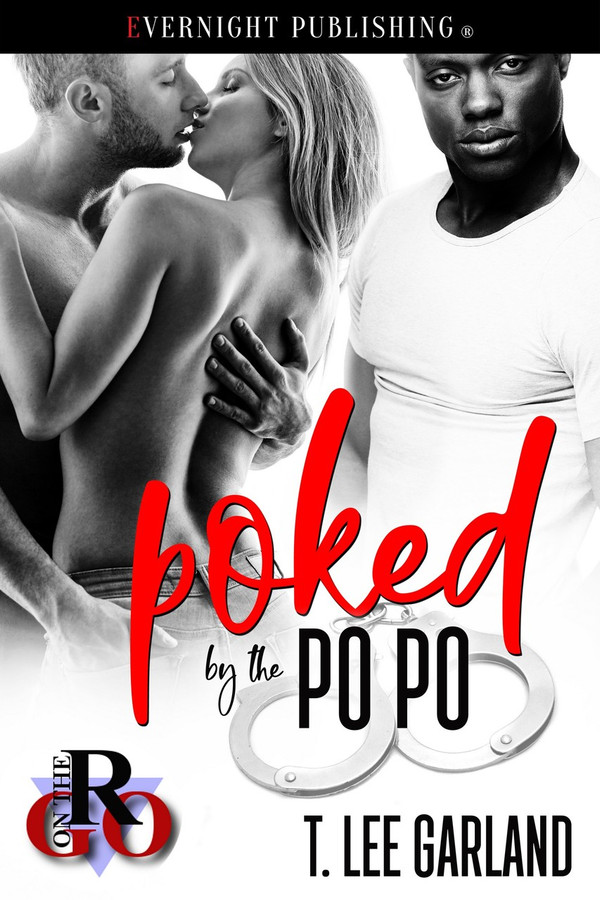 A killer forces them on the run...

Assistant DA Nicole Bevens is a fierce opponent in the courtroom and demands justice for her clients. She's as smart as she is beautiful, but when her former step-father breaks out of prison and comes after her intending to make her his next victim, she is placed into protective custody.

Detectives Trey Marsh and Jordan Wallace will do whatever it takes to protect Nicole—even if that means letting her have her way with their bodies. When trouble comes their way, they will put themselves in harm’s way to safeguard the woman they’ve come to love.

“Don’t worry, Ms. Bevens, we’ve got you covered. I have a couple of detectives on standby. Marsh and Wallace are two of my best. They are ex-military and experienced. They have been briefed on the situation and are ready to move you to a secure location. You will be put into protective custody until Mann is located and apprehended.”

“Babysitters? No, thanks, Chief, it won’t come to that. I can take care of myself.”

“I don’t think you understand, Nicole. This isn’t a suggestion. This is a direct order. As your boss, I insist that you agree to being placed under protective custody.” He could see her mouth open to protest and he quickly held up his hand. “Just, until Mann is located, you will be off the clock.”

Nicole jumped to her feet, her eyes wide with disbelief. “James, you can’t do that. I have pending cases. You just had me pulled from court, for heaven’s sake. I’m in the middle of an important trial. The victim is counting on me. I can’t let her down.”

“I understand and I’ve already taken care of that. I have transferred your active cases to other attorneys in the office. The pending cases have been delayed whenever possible and reassigned to others when we were not able to get them deferred.” Perkins shook his head. “Don’t fight this, Nicole, because you won’t win. This order is coming from the top. We all know how dangerous Mann is and I’m not going to chance the life of my best prosecutor and especially one I consider a friend.”

Chief Howard stood up from behind his desk and cleared his throat. “Ms. Bevens, Detectives Marsh and Wallace are waiting to escort you to your home to gather some clothing prior to heading to the room we have reserved at a local hotel.” Chief made a hand motion and the door swung open. Entering were the two large men she had seen earlier. “Ms. Bevens, this is Detectives Marsh and Wallace. You will be in good hands.”

They smiled at her and Marsh stepped forward and offered his hand. “Trey Marsh, Ms. Bevens. We actually met once before last year in court. I testified at a hit-and-run you were prosecuting.”

His large, warm hand gripped Nicole’s and his smile lit up the room. He had caused her many sleepless nights, thinking of how his smooth, shaved head would feel between her thighs. Women in the courtroom had audibly sighed when he entered the room. His smile was infectious and Nicole smiled back. “Yes, I remember, Detective Marsh. We won, as I recall, thanks to your expert testimony. Sorry you’re now stuck on babysitting duty.”

He shrugged his massive shoulders and flashed that smile, and Nicole felt her core tingle and heat pool at her center. “It’s my pleasure, actually. The law enforcement community respects your hard-nose approach in the courtroom. We’re on the same side, to get the bad guys.” His voice was silky smooth like rich, melted chocolate. He had a way of pulling her into his circle and making her feel safe, warm, and welcome. Nicole liked that about him instantly.

“Ms. Bevens, I’m Jordan Wallace. Unlike Marsh, I haven’t had the pleasure yet.”

The boy next door on steroids gripped her hand and gave it a firm shake. His eyes were amazing. They were even bluer up close, his gaze hitting her body like laser beams, and instantly she felt her panties go wet. She squeezed her thighs together to contain the mini orgasm-shudder that coursed through her body.

“Thank you, Detective Wallace, the pleasure is mine.” Nicole’s eyes swept the room, landing on all four men. Being the only woman in a room full of men was not a new experience for her, but somehow this was different. She sensed that these men actually cared about keeping her safe. Never having known a father, this male protectiveness was a new one for her and she wasn’t sure how she felt about it. “Chief Howard, James, thank you.”

Chief Howard stood and shook her hand. “Ms. Bevens, rest assured the department will use every resource we can bring to the table to recapture Mann. He can’t hide from us forever.”

Nicole certainly hoped not. She needed her life back and the sooner the better. She turned to her assigned bodyguards. My goodness, being locked up with these two was going to be interesting. Especially when her body was reacting like a teenager with its first crush and her mind was playing what if games with her. Nicole shrugged. She was always up for a challenge and these two would certainly be that and more.

Nicole was used to turning heads and being vastly underestimated in her work within the DA’s office. She didn’t mind too much – by the time most men realised she had a solid brain inside her pretty blonde head it was too late – their guilty clients were already half-way to jail. She enjoyed her work and relished putting the guilty away for a long, long time. Only now one of the worst killers she knew had escaped prison and had a long-seated grudge against her. With two dead-sexy detectives assigned to guard her body Nicole isn’t too concerned about her safety, until she discovers these men might just be a risk to her heart. I really enjoyed this short story. I was particularly pleased that the author managed to really balance the plot with the hot ménage sex. At no stage did I feel like one or the other was getting short-changed. The tension of having a crazy psychopath out on the loose and chasing after Nicole felt real enough to me that it didn’t feel like a plot-device, but a genuine source of conflict and worry for Nicole’s safety, and therefore of both Trey and Jordan in their roles as police protection. I also felt the chemistry between the two men and Nicole added a good layer of sexiness to the whole story without overdoing it. The three of them didn’t simply hop straight into bed, but progressed in a more natural way from trusting each other to becoming more intimate. I thought this really helped guide me along as the reader and made the relationship and dynamics between Trey, Jordan and Nicole feel more realistic. Nicole had some extremely modern thoughts on sex and romance which took me a moment to process. While I enjoyed her strength and freedom of thought I also found it a little sad just how vulnerable it made Nicole seem to me. I was pleased both Trey and Jordan could see through Nicole’s attitude and understand the complexities underlying it. My only slight quibble with the story was the speed with which much of the plot was wrapped up and some of the coincidences that needed to align for it. Given the short page-count I totally understand the author couldn’t drag things out or have a complicated trail to follow for the conclusion, but this did leave me feeling like the plot was a little rushed toward the end. The sex was hot and prolific, to my mind. I enjoyed that Nicole was intimate with both Trey and Jordan separately before they got together as a threesome. While a ménage is clearly where both Trey and Jordan wanted to head from the beginning I actually was pleased that Nicole was attracted to each man independently and was sexually interested in them both – that one wasn’t just a “tag along”. This helped me feel like the ménage began and worked on an equal footing which I really liked. With a solid plot and some seriously hot threesome sex this is a great short story that I feel sure will appeal to many readers.