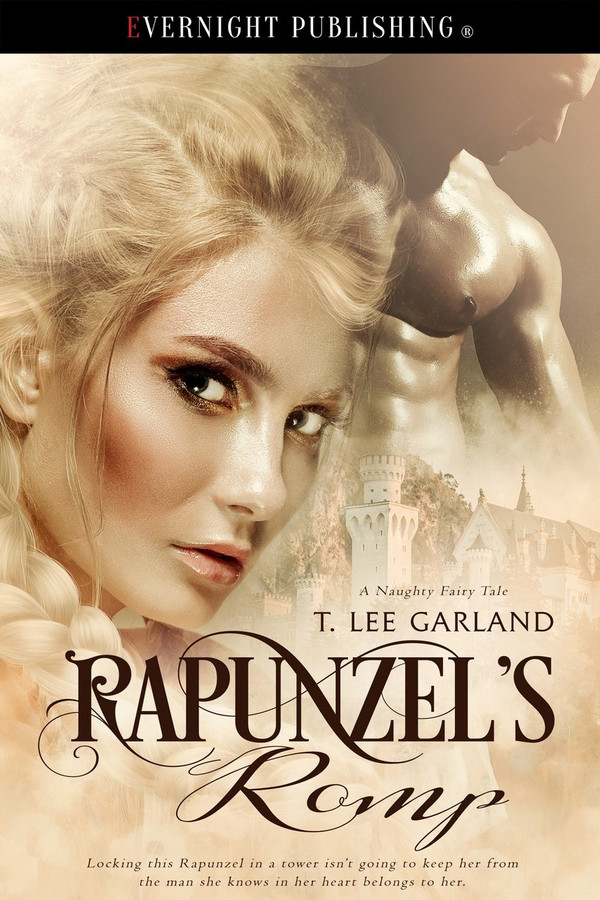 Rae Ann Compton has been called Rapunzel for the majority of her life. She grows her floor sweeping honey-blonde hair in memory of her mother who died from cancer when she was a small girl. Now she owns and operates Rapunzel’s, a high-end hair salon in Hollywood. Her life is orderly and business driven, until the day Alex Princeton, her secret crush walks in.

Alex is the quarterback for the Hollywood Hounds, and has been dubbed the Prince of Sunday, by the press. He’s sexy and usually only dates super models. Rae is no super model, but he makes her an offer she can’t refuse and soon she is flying first class to a castle in Germany, for the wedding of the century.

Locking this Rapunzel in a tower isn’t going to keep her from the man she knows in her heart belongs to her.

I look down at Rae’s honey colored hair. Sometime after dinner she had fallen asleep on my shoulder and I had spread a blanket across the two of us. She moans in her sleep, and her hand falls on top of my cock, which senses interaction and jumps up to play. I squirm in my seat and am rewarded with a mumble and a squeeze from below. Sweet balls, she is killing me and doesn’t even know it. It had been an exhausting flight made better by Rae’s presence. She made me smile, while frustrating the hell out of me at the same time. Most women try their hardest to impress me and get my attention. She seems to want to do the opposite, but she had all but admitted she was jealous and that she keeps up with me in the tabloids.

Ha! She is so busted!

I lift her braid and run its silkiness through my fingers over and over again. It bothers me that she thinks so little of me, but then again maybe I’ve earned that opinion. What could I say? I’m guilty of loving women and the attention they have always showered on me. Hell, I like, nope, make that love pussy. Was that a crime? I’ve always made sure to practice safe sex. I always use a condom, and when I am with a woman, I never cheat on her, always breaking things off before moving to the next woman. I try to be a gentleman and show women the respect they deserve, and many of the women I’ve slept with are still friends long after we’ve stopped screwing each other.

I try to shift positions without waking her, and I’m rewarded with another squeeze from below. I let out a slow, long breath, as I try to get myself under control. Having a giant hard-on as I make my way through the airport would not be a good thing. I hadn’t bothered pointing out to Rae that she was both breathing and had a vagina. At least I’m pretty sure she does, I’m hoping like hell she does, which totally would make her my type after all, if we’re going by her standards for me. No, she was not a super model, but her curves, sassy mouth, and business smarts make me hard as hell. The vision that she herself had put in my head of her riding my cock while her hair tickles my balls is driving me insane with desire.

This woman is getting to me. I bring her braid up to my nose and sniff, something fruity and light. I wanted to see her hair down and spread across my pillow. I wanted to trace the freckles across her nose with my tongue, and I wanted to remove those large glasses and look into her eyes. In her sleep she mumbles something again. Her lips part and I lean down closer to catch the warm breath that she breathes out. She did so little, yet it makes me so hard. It’s a shitty thing to do, but I can’t help it, I put my hand under the blanket over her hand, the one that is resting on my cock, and I help her to rub me. Never have I had such an immediate response to a woman. The seatbelt light flashes, and Gina moves down the aisle. The flight is coming to an end. Gently I brush my hand up Rae’s arm and touch her cheek.

Absolutely adored this book! Alex is in need of a date for his brother&#039;s wedding. He had no ideaI he would meet a princess when he went to get his hair cut. Rae, the owner of Rapunzel&#039;s Hair Salon, finds herself in a predicament when one of her employee&#039;s regular customers comes in to get his hair cut and the girl is not there so Rae does the cut herself. This man makes her knees weak and when he go as her an offer she can&#039;t refuse, she wonders what she has gotten herself into. The chemistry is undeniable but his reputation precedes him and this flaxen haired beauty does not want to be added to his list. As the heat turns up, so does the jealousy from some of the other guests. Will she be able to protect herself from heartbreak and protect her professional reputation when all is said and done. If Alex has anything to say about it! Another win for T Lee Garland!