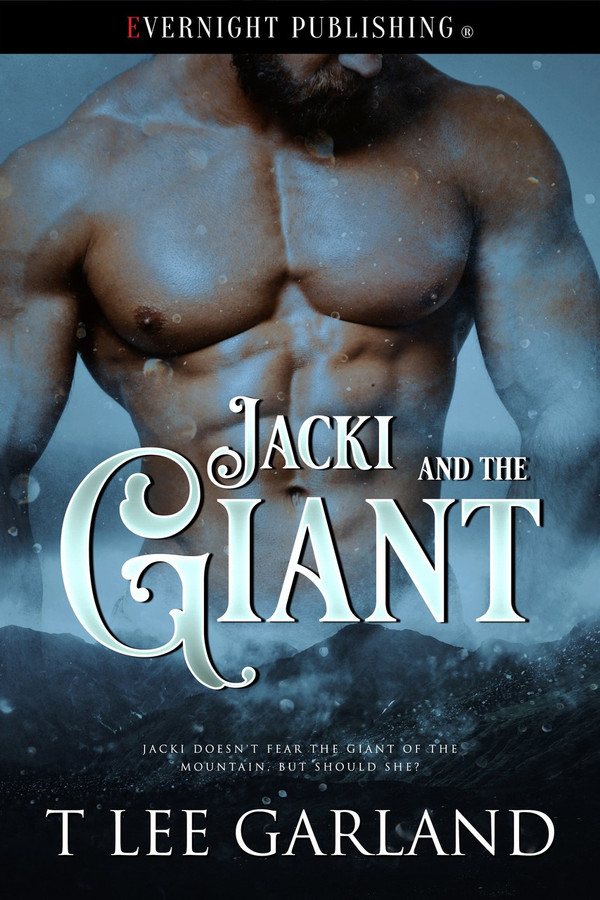 What if the Giant was just lonely?

Jacki’s already hard life just went from bad to worse when a misunderstanding brands her a witch and a mob intent on burning her alive sends her running for her life.

An odd little man gifts her with a handful of dried beans and tells her to use them in a dire situation. What could be direr? With the mob on her heels and her back against a mountain, Jacki drops the beans to the frozen ground and watches a beanstalk grow to the sky. With no other choice, she climbs.

Ben has been known as the fierce Giant of the Mountain all his life. He lives alone in isolation on top of the mountain, yearning for love and a family.

Can the tall woman with the fiery red hair that shows up in a snowstorm be sent just for him?

“I told you, Jacinda, you’re not going anywhere, not today, anyway.”

Jacki watched him walk to the fireplace, crouch, and stoke the fire before adding a couple of logs. He looked up at her, his face calmly impassive. “I’m going out to tend to the animals and I’ll come back and make us some breakfast. I suggest you stay put.”

Jacki leaned against the door. She was a virtual prisoner here. It would be nothing short of suicide for her to even try to leave. But she couldn’t stay here, could she? Here, alone with the likes of him? Her reputation would be in ruins. That was if she even managed to survive long enough to have a reputation. What if he was dangerous? He certainly looked capable of danger. He was too manly, too ruggedly handsome for his own good.

He cut his eyes to her and a dark eyebrow quirked up. It was almost like he could read her thoughts. Her heart sped up and her lady parts tingled with awareness. Perhaps he was dangerous in other ways. Her body was certainly telling her he was. She couldn’t go there. He was, after all, the giant. The town folk obviously feared him and probably for just cause. Shouldn’t she also fear him? Oddly enough, she didn’t.

Jacki swallowed and raised her chin. For some reason, it was important to her that he know she understood. “I’m not afraid of you.”

In one fluid motion, he turned and looked at her, stood, and leisurely, deliberately moved toward her. How could someone so big still manage to move so gracefully? Powerfully, yes, but somehow he managed to be smooth and not clumsy. Jacki felt her insides tremble the closer he got. She leaned back against the door and the cold from outside seeped through her clothing. He stopped in front of her. Close enough that she could see the flecks of gold in his bright-blue eyes. Close enough that she could see the edges of the scar and count every stitch that it must have taken to mend his skin back together. Close enough that she could smell his manly scent. It had a surprising effect on her body. Her breaths quickened, her heart beat harder and faster, and her skin grew warm and tingly. What was happening to her?

He reached out his pointer finger and slowly, deliberately, ran it down the side of her face and over to her bottom lip. His gaze dropped to her mouth and Jacki found herself holding her breath in anticipation.

“You should be afraid.”

“Why? Why should I fear you? Just because you’re…” She shrugged her shoulders. “You’re tall? I’m a tall woman. People also look at me with fear in their eyes.”

“No, not because I’m big.” His eyes flicked back up to hers. “Because I want to kiss you, Jacinda, and I may not want to stop.”

“The men in the village must all be simpletons.”

She shook her head. “No, I think they are just short.”

The corners of his lips twitched. He chuckled. It was low and rough. A sound from somewhere deep in his chest and it rolled outward and encompassed her, like a hug. “Well, thankfully I don’t have that problem, now do I?”