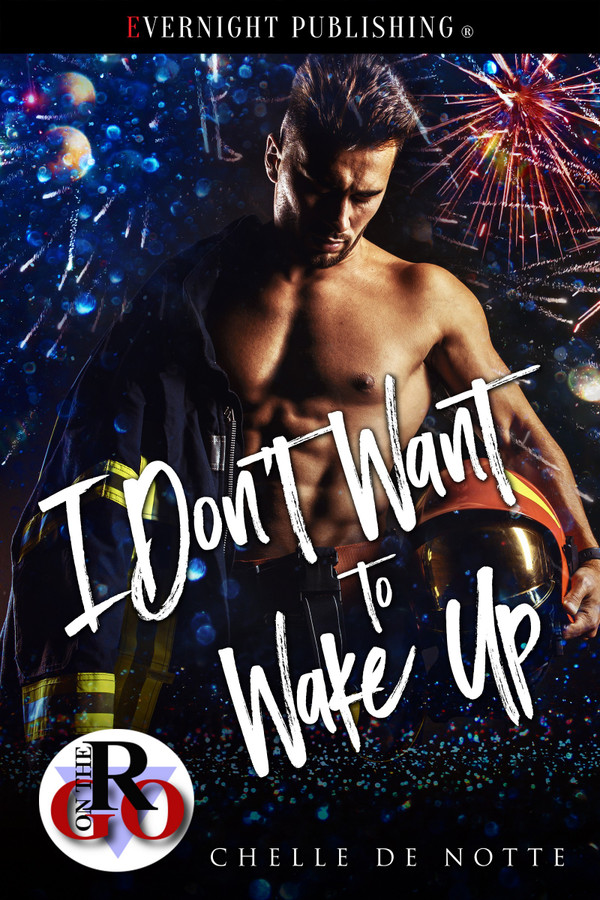 Between the demands of his job and his own work ethic, it takes a lot to get Lieutenant Mike Devierse to loosen up and relax. One woman managed it, and Kat’s at his firehouse’s Thanksgiving dinner.

In Kat Kominsky’s work at a spa, all the people she meets and massages tend to blur together. There are some standouts, though, and she’s excited to see Mike outside a professional capacity.

As Kat and Mike grow closer, their time together is right out of a fantasy. But will they be able to handle the moment when the reality of each other’s jobs sets in?

The restaurant turned out to be a little noisy, which forced Mike to lean in if he was going to hear a word of the small talk they were making about their days. Every time he did, he caught a whiff of Kat’s fresh scent and felt a flashback to her soft lips, strong hands, and warm body in his arms. That small touch at the entrance had fired him up for more, and it was all he could do to keep control.

“You just seem a bit … tightly wound. Have you been going for regular massages like I suggested?”

It was the first allusion to that day since they’d met up again. “I haven’t had a massage since I saw you. For weeks, I didn’t have time to even think about it. And then when I did … I tried to get another appointment, but you were booked solid, and I couldn’t imagine anyone else measuring up to you. So I guess I let it slide and forgot about it until now.”

Her cheeks flushed pink. “If I had known, I would’ve made time for you. It would’ve been great to see you again, and I was so glad to see you on Thanksgiving.”

He smiled at the memory as he touched her hand. “What a surprise that was.”

“A good one, I hope.” She inched her chair a little closer to his as she spoke, and lightly traced a pattern where his palm met his wrist. The touch sent a signal straight to his groin.

“The best.” His voice came out sounding a little strangled. He clasped her hand, and she leaned in further. His mouth might have met hers again, but the waiter arrived with their entrees. The aromatic plates were still steaming, which gave him an excuse to hold off on eating. Another appetite was demanding more attention.

“And I want you.” She pressed her leg into his, and that was all the encouragement Mike needed. “I asked for you, you know.”

“I’m glad you did.” He put his hand under the table and on her thigh. Her eyes widened, but she didn’t object. Quite the opposite—she rubbed her foot against his under the table.

“Maybe we should get these to go.” Better to head out before they got kicked out, and the arrangements would buy him a few minutes so he could stand again.

“Definitely, but to whose place? My roommate has an evening class, but could come back any time.”

“But I don’t have one.” And once they got out of here, he was going to make her feel as good as he had during that massage and then some.

You are here: Home / Reviews / Erotic Romance / I Don’t Want to Wake Up by Chelle de Notte I Don’t Want to Wake Up by Chelle de Notte March 9, 2022 By Long and Short Reviews Leave a Comment I Don’t Want to Wake Up by Chelle de Notte Publisher: Evernight Publishing Genre: Contemporary, Erotic Romance Rating: 4 Stars Reviewed by Dicentra He’s a hot firefighter… Between the demands of his job and his own work ethic, it takes a lot to get Lieutenant Mike Devierse to loosen up and relax. One woman managed it, and Kat’s at his firehouse’s Thanksgiving dinner. She’s a beautiful masseuse… In Kat Kominsky’s work at a spa, all the people she meets and massages tend to blur together. There are some standouts, though, and she’s excited to see Mike outside a professional capacity. As Kat and Mike grow closer, their time together is right out of a fantasy. But will they be able to handle the moment when the reality of each other’s jobs sets in? Chelle de Notte’s I Don’t Want to Wake Up is a fun and steamy read – a perfect choice for those looking for something quick that’s easy to finish in one sitting. Our hero, Mike fights fires on a daily basis in his job. But will he be able to handle the heat that comes with the budding relationship he has with beautiful masseuse Kat? Only time will tell… One thing I appreciated in this book (and other romance books of this length) is when the author sets up some off-page event that establishes the relationship and the chemistry. Books that are less than 100 pages often suffer when there’s too much on-page relationship establishment as it takes away time from the action and the meat of the story. This book thankfully avoided that issue. I’m happy to say that there was minimal downtime between the start of the book and when Mike and Kat give into their feelings. Once they stopped fighting it and gave into the tension, it was so much fun to read. I think I have a thing for firefighter romances now after reading this book, but I’m not mad about it. While Mike’s job as a firefighter does play a big role in this book, I was quite pleasantly surprised to see how the author incorporated Kat’s job as a masseuse into their relationship (and some of the conflicts therein). As Mike puts it, Kat’s job involves “rubbing down scantily clad people of all sexes for hours at a time.” This unsurprisingly inspires some feelings of jealousy in Mike, and while it’s not the first thing you would think of after reading the blurb it worked well with the rest of the plot. I was especially amused when Kat and Mike had conversations with their coworkers (Jason and Kelsey respectively) about how to deal with the other person’s job and the worries that come with it; I think Jason and Kelsey were quite amused too. Overall, I thoroughly enjoyed the book. I hope readers will enjoy Chelle de Notte’s I Don’t Want to Wake Up as much as I did. If you’re looking for a short and entertaining erotic romance read that’s complete with a happily ever after ending, you’ve come to the right place. I look forward to checking out the other Romance on the Go titles in the future!

Turning on the Light by Chelle de Notte