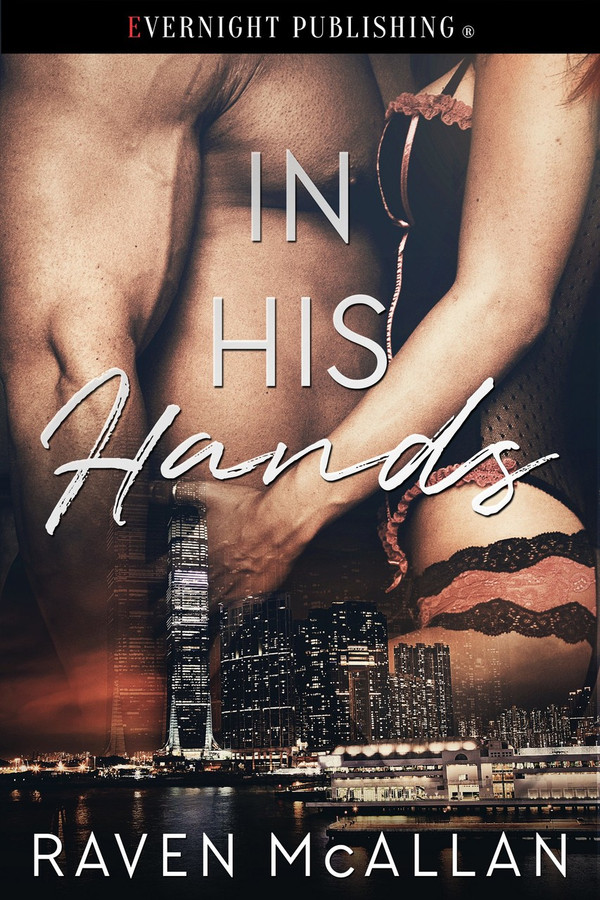 In Monsoon season, in Hong Kong, anything can happen… even so, the last thing Caness Clacher expected was to meet a Dom. The very man who made her want to sink to her knees and say, “Yes, Sir.”

Unbeknown to Caness, Patrick Lim had waited a long time to claim her as his sub.

Without electricity and with a monsoon raging, it’s time to explore their desires. Will the elements work in their favor or not?
Only time—and a scene—will tell.

If something is bothering you, put your hand up in the air, or if that’s not possible say, ‘Please, Sir’.”

Patrick waited with bated breath to see what her response would be. In all honesty he wanted to shackle her, fuck her five ways to Friday, and then turn her over and do it all again, but that time in her ass.

Slowly, Lim, let her get used to it all.

His cock almost split his trousers when she grinned and nodded.

“Then, I think we’ll take it nice and slowly and try a little wax play. A little decoration on your breasts and tummy to start off with.”

Her eyes widened and he could see the heat that flared in them. Patrick chuckled. “But I do think you’d feel a lot comfier naked now. First though, I need to get out of this suit and put on something more fitting for a scene.” She nodded vigorously and he laughed. “And less likely to get spoiled when my pre-cum decides to get in on the act and make its presence known.”

Caness took a deep breath. The action swelled her breasts, which, with the chain swinging from them, was such a fucking turn on. Patrick had a hard job not to unzip his trousers, take his cock out, and fist himself hard and fast. Only immense control born of years of experience stopped him. He would wait. The pain in his dick would help him to concentrate on Caness, which was as it should be.

Her skin had the soft sheen of arousal coating it. Her lips were slightly parted, and her eyes had the haze of desire clouding them.

As she let her breath out in a long silent whoosh, Patrick gave in to temptation and stroked her collarbone, and placed his curved hand over her breasts. “These are mine, pet. And this.” He cupped her mound over the pelmet of her skirt. That would come off in a second, he hoped. “This is mine.” He ran his other hand over the globes of her ass and teased her dark hole over her skirt, letting the silky material caress the opening. “As is this. In fact, your body is mine unless you say otherwise. Oh, and in case you were wondering. Your climax? Very definitely mine. So I’ll have to ask you once more: are you happy to give yourself to me, body and soul, whilst we scene?”

Her eyes widened, and he flicked each nipple in turn. “This is one of those occasions where I’ve asked you a question, which you need to answer, pet. So color?”

Patrick shook his head in mock annoyance. “Um green is a new one on me. Anywhere near green as in ‘good to go’ green?”

He nodded and walked across to the patio doors and opened the curtains. He checked the long rope handholds were where he wanted them and grinned to himself. Torturing a subbie this way was so much fun.

It was totally dark outside, with no lights showing. “Then get out of those clothes and stand facing the outside, just in front of the window. You see these handholds?”

“Grab them. I’ll change the tension when I get back. There are markers on the window surround for your feet. I’d like you using them all for when I come back. Naked of course. When we play, unless I say otherwise, you’ll be naked.”

He watched as she processed what he’d asked her to do. Caness swallowed and put her hand in the air. He’d thought she’d do that. He let the silence stretch until she wriggled her toes into the carpet.

She cleared her throat. “Stand naked in front of the window? Where anyone could see?”

“It’s black rain and we’ve no electricity,” Patrick pointed out. “Anyone who is stupid enough to be outside in this will be too concerned with their own safety and welfare to get their rocks off looking up at you spread-eagled in the window, as arousing and luscious as the view will be.”

She bit her lip, realized what she was doing, and stopped suddenly. “But it might come back on.”

“So it might,” he agreed. “Does that mean you’re safe-wording out?”

This time the silence lasted longer.

There was not a chance he was going to tell her it was one way glass and although she could see out, no one could see in.

That would spoil this delicious subbie-torture.

Besides, she either trusted him or she didn’t.

“You have until I come back down to decide.”

This was a thoroughly enjoyable book to read. Tune descriptions were vivid, the characters interesting and well developed, and the sex was absolutely scorching! Couldn&#039;t put it down once I started. I would highly recommend.

In His Hands by Raven McAllan is a true treat! First, I’m a huge fan of Raven’s, I love her books, I love trying to decipher some of those truly UK words, and I just love her! She’s the only author who will ever get me to read Regency romance. Ever! She has a way with words that actually makes it enjoyable for me. In His Hands is a BDSM romance set during a monsoon in Hong Kong. One of the enjoyable parts of this book is in knowing that the author has actually been to Hong Kong, so she has her research down. There are two characters in the book, Caness (love the name!) Clacher and Patrick Lim. Caness has a twin brother Anthony who is mentioned in the book, but he is off script. Caness is on the last day of working full time with the company she is with before going freelance. She is headed home in the middle of a severe black rainstorm which is a harbinger of a monsoon. She stops in front of a shop window and sees silver cuffs and a collar. She know exactly what they are for and they get her excited, then, she hears a voice tell her that they would look good on her, and nothing else. Especially with her on her knees before him. Caness turns to the stranger and before long finds out that he’s not really a stranger. He’s a friend of her twin brother Anthony’s and she actually knows him. Patrick Lim. He invites her into the shop and volunteers to take her home. She has a choice, does he take her home? Or, does he take her to his home to wait out the monsoon where she will become his sub and learn what it means to submit? This was an absolute joy to read and I loved both Patrick and Caness. The scenes they did together were incredibly hot (like top of the scoville chart hot!) and I hated to see the words, The End. Luckily, Raven will write more books, but this was definitely a favorite!

His Boss, Her Dom by Raven McAllan