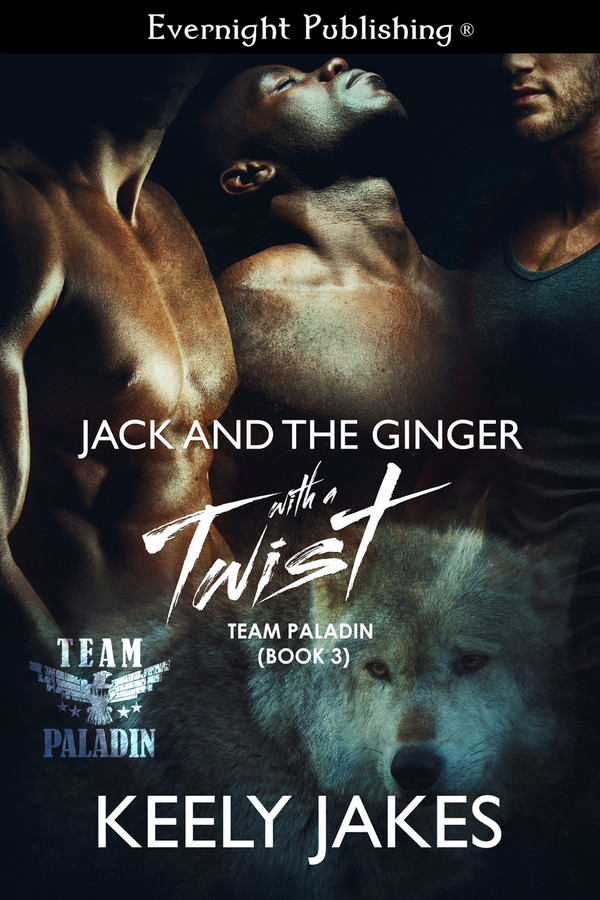 Going out alone was Griffin Bower’s first mistake. Accepting a drink from a stranger was his second. After spending a week as a whipping boy to a sadist who called himself “Doctor Pain”, a guard helps Griffin escape, then his roommate’s half-brother whisks the two roommates away to Paladin, Montana.

Walking into Twisted Jack’s, the newly renovated bar/restaurant, a battered and bruised Griffin meets a pair of the most interesting men who vow to protect him from everyone and everything from that point on.

Jack and Twist have been mates and battle brothers since the first week of basic training. When Griffin walks in their bar, the two men realize he is the man meant to complete their family. Can they keep Griffin safe while he heals? Will he agree to mate with both men? Will Doctor Pain show up looking for his missing pet?

“Fuck me sideways,” Jack Bailey murmured when he caught sight of the man who had just stepped into his bar. His cock leapt to full, erect, painful attention in two seconds, causing his jeans to pinch.

“Later, hot stuff. Talk to me after closing time,” replied Oliver “Twist” Charles, his best friend and partner for the last five years. They were partners in the military, in the bar, and in life. Twist patted his ass affectionately as he stepped behind Jack on the way to the cash register.

“No, check out what just walked in,” Jack said.

He casually reached down and shifted his cock into a more comfortable position though there still was not as much room as his long, thick cock needed. When Twist glanced around the room then looked back to him, Jack gave a nod toward the front door. Said hottie remained just inside the door, looking around and taking it all in.

He looked serious and overwhelmed and something else, but Jack could not put his finger on what. Jack wondered what brought him to Paladin.

Jack and Twist were two of the seven former military members who had made the news not too long ago for being the sole winners of an over five-hundred-million-dollar lottery. After taking the lump sum option and paying the taxes, they were still more than a hundred million dollars richer. What the world didn’t know was they were gay, shape-shifting wolves who had formed their own pack while in the Marines, and even before their lottery win, had decided to move to Montana.

Since none of them cared about status or wealth as long as they stuck together, they bought a ghost town and two thousand acres in the wilds of Montana. They were rebuilding the town one building at a time, using it as a sanctuary where they could recover from the physical and mental wounds they had received in the military. The fact that two men had found their mates gave Jack hope he and Twist would one day as well.

Twisted Jack’s Pub, which included a bar and restaurant that kept them fed, had been the second building to be renovated after the hotel. Jack and Twist had taken on the positions of co-managers and bartenders. Forrest Bell was head cook, and the rest of the team rotated the duties of assisting in both the kitchen and bar.

Returning his attention to the man across the bar, Jack had a vision of the ginger-haired, freckle-faced, white boy all ruffled, sweaty, and plastered between him and Twist after the bar closed. With his deep tan and Twist’s coffee with a touch of cream mocha tint, they would make one hell of a ginger cream-filled sex sandwich.

“Holy sex on a stick,” Twist whispered when he finally figured out which man was the object of Jack’s lust.

Jack glanced over and down. His partner’s painted-on black jeans bulged with the man’s erection in two point three seconds. Obviously, Twist agreed there was something special about the man who now approached the bar at a turtle’s pace.

Only then did Jack realize the man was not alone. There was an equally cute, brown-haired beauty, who did absolutely nothing for him, walking arm and arm with his redhead. Roane followed the two into the bar, but got stopped by their team leader and pack alpha, Shane Thomas, near the door.

Shifting his gaze back to the ginger-haired man, Jack’s cock throbbed as he sauntered to the end of the bar where the two men stopped. His cutie was leaning heavily against the counter and sweating as if he had run a marathon though it was barely thirty degrees outside.

“Good evening. What can I get you gentlemen tonight?” Jack asked as he wiped the spotless bar before setting down two thick paper coasters.

Jack couldn’t tear his gaze from the redhead. Bright, pain-filled blue eyes met his for a second then looked away. When they returned, the gaze held for a few more seconds before the smaller man dropped his eyes to study the shine on the bar.

Jack looked him up and down, frowning at the lines of discolored skin he could see around the man’s right wrist at the edge of the long-sleeve, celery green t-shirt he wore. A check of his left arm showed the same marks. Grabbing the little man’s right hand, he shoved the sleeve to the man’s elbow.

Bruises covered his man’s arm from the wrist to his elbow. Evenly spaced stripes of black, blue, and purple mixed with what looked like handprints wrapped around his arm. Jack recognized the bruise pattern from his time in several war zones over the past ten years. Someone had systematically tortured this man.

“What the fuck? Who did this to you, baby?” he demanded.

Loved this series. They were a great read with some very good characters! I&#039;m not giving spoilers! :)

I love the guys in Team Paladin, and they just keep getting better! Jack &amp; Twist have been mated for years, but have always known they needed a third mate. Along comes Griffin, abused and terrified. I really like Jack, a lot! He was a definite man&#039;s man, and made no excuses for it. Twist was a great mediator between the three, but he has his little quirks as well. Griffin definitely redeemed himself at the end, learning to not run from his fears. All in all, a great read and wonderful addition to Team Paladin!

Oh man! Do I want to sit in a room and watch these guys goat it What a good story, it had flow, depth and kick ass marines all rolled into one… I am glad with how the series has grown from book 1 and happy that we still get a glimpse of the other characters from the first two books… Twist is by far my favorite character so far and Jack is just the caramel on this sundae… Griffin has been abused but these two men know what it’s like to experience evil and will do everything in their power to destroy anything that makes their mate afraid… I loved this 3rd installment and can’t wait to read the next book…

“Jack and the Ginger with a Twist” is the third in the “Team Paladin&#039;s” series. This book has a pretty good story line. I liked that it was a ménage book and that Griffin had the right amount of the tortured wounded air about him. Plus the chemistry between the three men Jack, Twist and Griffin made this book a good read. The ending left it open for the next book, which I&#039;m looking forward to reading with impatience. I want to know what happens next! I recommend this book for the good read it is.

I love the guys in Team Paladin, and they just keep getting better! Jack &amp; Twist have been mated for years, but have always known they needed a third mate. Along comes Griffin, abused and terrified. I really like Jack, a lot! He was a definite man&#039;s man, and made no excuses for it. Twist was a great mediator between the three, but he has his little quirks as well. Griffin definitely redeemed himself at the end, learning to not run from his fears. All in all, a great read and wonderful addition to Team Paladin!