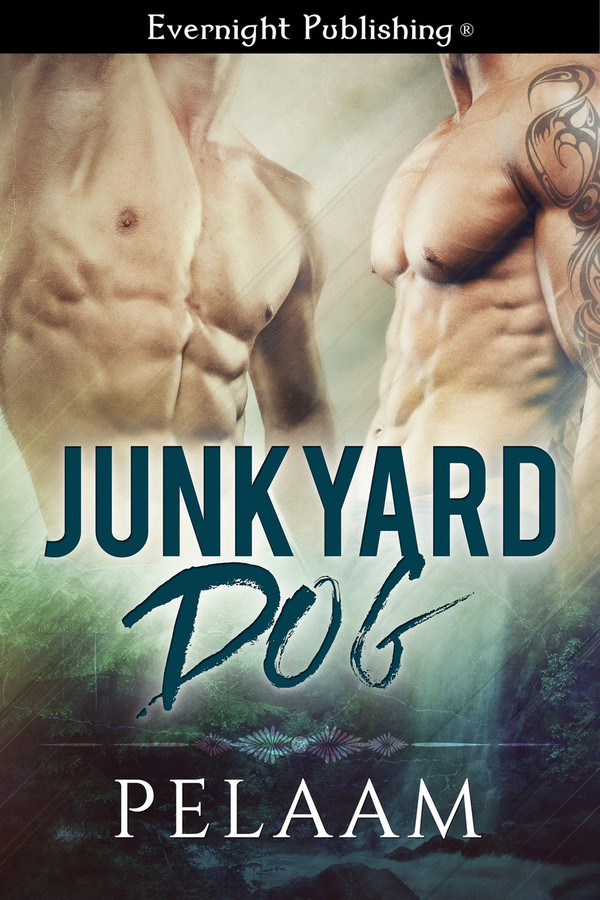 Lyall knows he's the epitome of the bad boy that every good girl, or boy, is warned against. He needs the aggressive appearance, and lives up to it. You don't mess with him, or his pack family.

When his wallet is stolen, it starts a chain of events that turns his solitary life upside down.

When their life is torn apart by another alpha shifter, they will both fight tooth and claw to be reunited.

The wolf slowed, enabling Lyall to shift. Niko stared at the smooth, inked skin and the solid muscles of the man who stopped close to him. There wasn't an ounce of spare flesh on Lyall's body. Somehow, Niko had always thought a wolf shifter would be hairy in human form, but Lyall had even less hair than Niko himself. At least he had a smattering of hair across his chest.

Almost of its own volition his gaze dropped lower, following the ‘v’ lines to a thick nest of dark curls surrounding a thick cock that seemed to rise is response to Niko’s gaze. He quickly looked up into Lyall’s eyes, silently cursing his curiosity. “I heard a howl. You okay?” He kept his voice deliberately curt and clipped.

“Fine. I didn’t know how else to alert you.”

Tilting his head slightly, Niko frowned. “You took a long time to answer me.”

“Is everything okay? What brings you out here?”

The obvious concern in Lyall's voice distracted Niko. For a moment Lyall had appeared nervous, but Niko shrugged it off. “Fine. Well, apart from my car that is.”

Although Lyall’s body relaxed, the thick cock remained half hard and the scent of his musk and sweat was oddly appealing to Niko.

“Yeah. My car. It hasn’t sounded good for a while, but to take it to a mechanic would cost more than I can afford. But I can’t be without a car either. Justin said you look after shifters.” Niko hoped Justin was right, that Lyall wouldn’t tear him a new one after their explosive first meeting.

“I’ll take a look at it for you. But if it sounds that bad I may not get it sorted today. Do you need to borrow a car?”

The offer took Niko by surprise. “One of those cars out front?” He didn’t think either of them was mobile.

“Nah.” Lyall laughed, a soft, easy sound that tickled Niko’s ears pleasurably. “I could let you have the truck. Then drive out to your place in the car assuming I can get her roadworthy tomorrow.”

“Look I said I was sorry about the other day. Why come here to have the car worked on by me if you throw my offer back in my face.”

Anger zipped along Niko’s veins and he whirled on Lyall. “Don’t be such a prick. You didn’t let me finish. I can’t drive the truck. I … I wouldn’t feel confident enough.” His cheeks burned with the embarrassment of the confession, but he wanted to tell Lyall the truth. He liked his small car. He wouldn’t feel comfortable driving something the size of Lyall’s truck.

“Sorry,” Lyall muttered. “I shouldn’t have jumped on you like that.”

A vision of Lyall on top of him seared into Niko's mind and a darkly delicious undertone to Lyall’s voice caressed Niko’s libido. His cock swelled in reaction. Thankful that his sweater was long enough to cover his groin, Niko coughed slightly, hoping to ensure he at least sounded normal.

“It’s okay. After all, we had less than an ideal meeting. Twice.”

“Let’s put that behind us. How about we get back to the house? I’ll put some clothes on and take a look at the car for you.”

“Sure. Sounds good.” If he was honest, the bit about Lyall putting clothes on didn’t sound good. At all. But there were too many differences between them for Niko to even consider Lyall as a possible mate. Well, at least not with his rational mind. Other parts of his anatomy thought it would be an excellent idea.

I liked the humor of the meeting between Niko and Lyall, it was funny. The chemistry between them was done well and these two men are a great match. The story is enjoyable and one that I&#039;ll reread again. And on that note I will gladly recommend this book for the good story it is.

A good short novella. The author gave us good characterizations and a fast paced entertaining story. In the book description, Lyall is identified as a bad boy and he certainly comes across as such, of course I’ll add sexy to the mix, hard lines and tattoos, hot. Being the bad boy that he is doesn’t include a mate much less a feline, until he meets Niko. Lyall is the Alpha of his wolf pack, a pack of omegas that no one else would take in or others had discarded. When Niko’s world is turned upside down by the disappearance of Lyall he gathers up the Omega’s and goes in for the rescue. The author packed quite a punch in the advertised 54 pages. Like I said earlier the characterizations were good, it brought to life the characters. We were able to get into the mindset of the characters a little which helped to round out the characters. There was enough action and romance to add angst and a touch of reality to the story. As good as the author was with all of the aforementioned, there was just too little of everything. I can’t tell an author how to write but I really would like another chapter in this story, it left me feeling like there was more of the story to tell.

This Alpha wolf meets his match in a feline shifter, who not only steals his wallet but his heart as well. It’s a fun journey watching as they make their way into a happily ever after. This story is sweet, fun, hot and all things you want to read in a short story. There is also conflict and drama as well as hot love making on these pages. Lyall is an Alpha wolf of an all Omega pack. He’ll do whatever it takes to care for his own. Niko is both feisty and compassionate. He’s trying to care for what is really his brother and his own little pack. Bryan as the bad guy is written wonderful in an ‘I want to hate him’ evil way. And Manu is the character who is such a character. Pelaam does a beautiful job writing these characters, I loved them and yet the two main characters are so different from each other. However, I was left wondering about the backstory about the conflict between Lyall and Bryan. The writing is smooth, pulling you into the pages. For a short story you are emotionally invested in the lives of Lyall and Niko. If you’re a Pelaam fan this is a must read. If you’re a fan of cross shifters stories, then I highly recommend this one.

Lyall is the alpha of his pack and knows he will do anything in his power to protect all the omegas that are under his care. Niko has his plate full trying to make ends meet for his little brother and twin cousins, so much that he steals Lyall’s wallet. Once they officially meet their attraction is palpable even if they can’t realize it right away. This book gave you two very different alpha personalities that I wish would have been expanded within the story. While they are both alphas they do have a way of complimenting each other well. Lyall is not sure at first if taking Niko as a mate is something he can do, he has a lot of responsibility and Niko does as well. When they find the balance needed to make their relationship works fireworks erupt. I give this book 3 diamonds for the author’s use of good characters and storyline flow from scene to scene. Get your copy at Amazon or at Evernight Publishing.

This captivating cross-shifter HEA romance has a terrific balance of sweet, tough, tender, and scorch. While the story focuses on the emotional characterization of its two leads—Lyall, the wolf and Niko, the feline—more than their “shifter pack life”, there are enough “dog and cat” nuances to make this palate cleanser a nice morsel of fun and frolic for anyone to enjoy. I was particularly impressed by Niko whose ability to be a deadly feral creature one moment and a sensual purring lover the next was seamless and quite believable due to the author’s excellent action sequences and brilliant word choice. Lyall was equally captivating as the bad boy alpha who willingly hides his tender side to protect his pack of homeless omegas. And kudos to the author for the characterization of the villain, Bryan. Despite his limited appearance in the book, Bryan makes for one nasty neighborhood bully whose gunfight-style showdown with Lyall and Niko gave this delicious little gem a short but powerful anti-bullying message. There are a lot of sweet tender bits between the two boys as they dance the “I like you do you like me shuffle”, but sweet turns to spark and then scorch at all the right moments. Like some humanity with your shifter reads? I recommend this sleek little puppy. Thank you, Pelaam, for this great cross-shifter love story… my first time reading your work, but not my last. “Tasty, Steamy, Romantic… with claws”