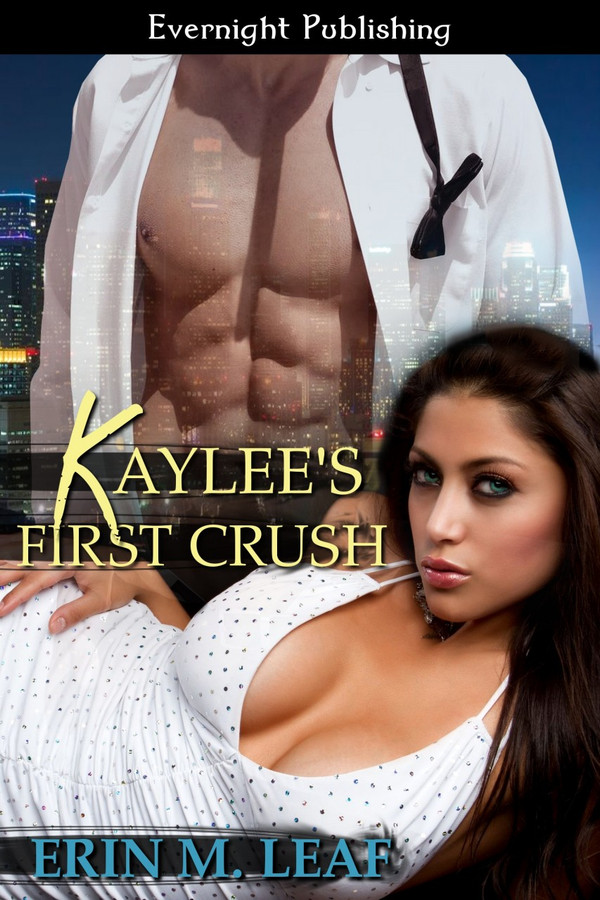 The last person Kaylee expects to run into when her flight is cancelled is Mr. Hugo Valtree, her favorite high school teacher. It’s been five years since she graduated and she’s never forgotten the sexy man who’d been her first crush. Now she’s all grown up, but he’s still out of her league: he’s inherited his father’s company, making him a billionaire. She’s still shy, still a virgin—what can she possibly have to offer him?

Surprisingly, Hugo offers her something instead, something she desperately needs: a place to stay for the night. It’s storming outside and just her luck, all the hotels in the city are booked. Of course, there’s only one bed in his hotel room…

“Do you like to touch yourself?” he asked, abruptly pulling her out of her head.

He nodded meaningfully towards her groin.

Kaylee twitched, fighting the urge to dive under the covers. She was a grown woman, for goodness’ sake! And everyone masturbated, right? It wasn’t like he was going to act all surprised if she admitted to it. She opened her mouth, about to say yes, then abruptly shut it again as the surrealism of the situation hit her. Her old teacher was asking her if she liked to touch herself. She nodded minutely, eyes looking everywhere but into his.

He chuckled. “Don’t be embarrassed. We all do. Even me.”

“It’s my turn to ask a question,” she managed, past suddenly dry lips. She moistened them, still looking at his lap.

Her eyes flew up. His were twinkling, their brown depths lit with heat and something more. She frowned a little, feeling very uncertain, but pushed aside her misgivings. When would she ever get this opportunity again? “Would you touch yourself for me?” she croaked. When he went completely still, as if stunned, she rushed on. “Please?” She could hardly believe she’d managed to ask him for this. “I’ve never seen an aroused man.”

He let loose a harsh breath. “Christ. You’re going to be the death of me,” he muttered, but his hands were going up his chest.

Kaylee watched, not sure what he was doing, and then he rubbed his palms over his nipples until they pebbled up.

“Does that feel good?” she asked.

He quirked an amused eyebrow at her. “Does it feel good when you touch yourself there?”

Oh, right. It was his turn to ask a question. She flushed. “Yeah.” She cleared her throat. “Yes, it does.”

He smiled and flicked his thumbs over his nipples again, then trailed his finger down to the waistband of his pajamas. “I suppose you want me to take off my clothes,” he stated. Before she could reply, he pulled off his t-shirt with one swift motion.

Kaylee stared. She’d spent countless hours looking at him when she was in high school, trying to imagine what his bare chest might look like. She’d spent countless more hours remembering what he’d looked like in that tight t-shirt after the day she’d caught him with his dress-shirt off. Neither her imagination nor her memory prepared her for the reality. He was hard. Golden-skinned. A light trail of hair ran down from his chest to his navel before disappearing into his pants. She ached to touch him, to run her hands all over that smooth, muscled skin. When he touched himself again, she jerked her eyes up to find his gaze locked onto her breasts. She looked down, not surprised to see that her nipples were erect, too.

“You like watching me touch my chest,” he said, running his fingers lightly down his body.

She nodded, licking her lips. She couldn’t breathe.

“Then you’ll probably like this, too,” he said, standing up. His giant erection tented his sleep pants.

Kaylee couldn’t drag her eyes away. Slowly, oh so slowly, he hooked his thumbs in the waistband and pulled the soft fabric down. When his cock sprang out, rosy and thick, her breath hitched.

“Yeah, you definitely like that,” he said, voice gravelly. He shoved his pants down and kicked them away, standing in front of her with no sign of embarrassment.

And why would he be embarrassed? Kaylee asked herself. He’s magnificent. She let her gaze travel up his muscular calves to his thick thighs. She lingered on the dark thatch of hair at his groin. A tiny, pearlescent drop of pre-come eased from the tip of his cock.

“Ask me a question. Anything,” he ground out, hands fisted at his sides.

She looked up at his face, gathering her courage. “Can I touch you?”

of book. It gave the forbidding taboo type feel. The May/december theme was outstanding. I loved the fact that even though it was a quick read that it kicked butt still. I gave this 5 stars and I rarely give 5 stars to short books. Erin is the exception to the rule. I loved that the two main characters played off of each other and they didn&#039;t let the chance slip buy. It has been a while since I read this but if I remember correctly they ended up sharing a room and the sizzle they shared ... well lets say it stayed with me for the rest of the night...grin. I loved that he gave gifts .. some big but mostly simple but stately gifts to remind her of what they shared. At the end when they met for the a second time just made me... whew...without giving it away I would say that I smiled and cheered. I def believe this is a book for everyone to read... NOOOOOOOOOOOOOOOW!

Stop the presses!! I just finished reading Erin M Leaf’s “Kaylee’s First Crush” ten minutes ago. I HAVE to get this done right now because I don’t want the sparkles to wear off. This was, and I’m not kidding, one of the hottest books I’ve ever read. I still have a fluttering in my tummy, and other parts of me are fluttering as well ;-) It was short, sweet, and right to the point. A girl has a serious crush on her high school English teacher, and now, four years later, they run into each other in a chance encounter at an airport during a snowstorm. What followed melted my panties until they exploded on the floor. The book really resonated with me because I had a HUGE thing for my high school math teacher. He was the handsomest man I’d ever seen, with the sweetest smile you could imagine. He was smart too and was always willing to lend a hand when one of his students needed help, and believe me, I needed help. I sucked at math. Anyway, 27 years later, I still dream of him and his smile…offering to let me sit in his van while a sudden rainstorm pours drenches me after discovering my car is stalled. Sigh…Ok, Kenna…snap out of it. There is a review to be written here. Kaylee is fresh out of college in California and on her way to NYC to start her new job. Hugo is a former teacher who is now running a family owned company after the passing of his father. The rest is a scorching hot vacation from every day life…a snow day, if you will. These two are just amazing together. In fact, I’m a little bit in love with Hugo, and I would LOVE to study all the classics with him. Forgive me for gushing (hehe…I said gushing), but I can’t say enough about this book. The characters were well fleshed out, even though it was a pretty quick read. I’ve already told you that the story is one of my ultimate fantasies, and I’ve given a bit of a mention to the nuclear level sex, but the romance was also magical and gave me a smile a mile wide. Please, please, please give yourself a treat and read “Kaylee’s First Crush”. It will make you smile too. I guarantee it! 4.5 stars