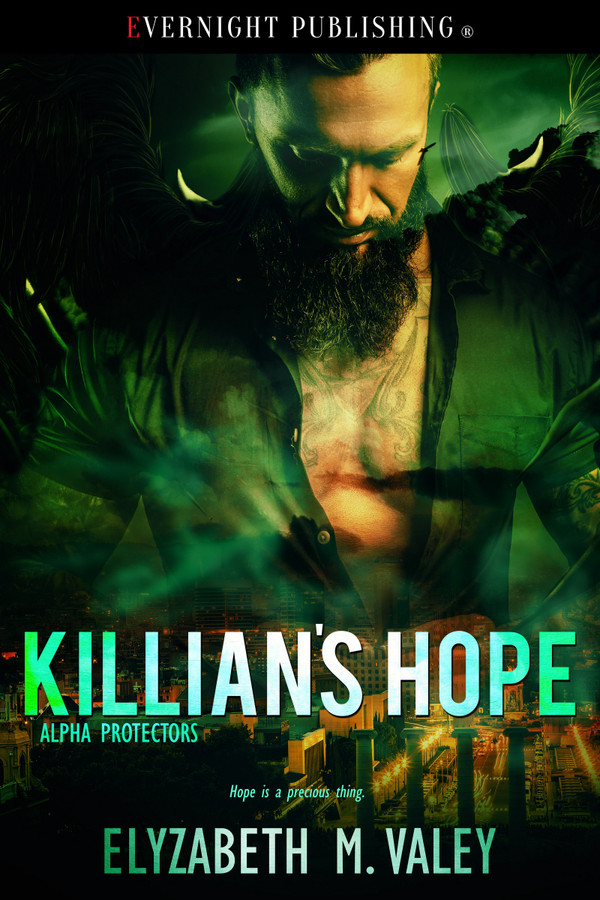 Hope is a precious thing.

Hope is all Alpha Protector Killian has. Hope for more time with his mate. Hope for a better future in which they can be together freely. When they’re both assigned to the same undercover mission in Spain, Killian seizes the opportunity as a chance to spend more time with Prudence.

Unfortunately, she doesn’t share his point of view, but hope is the last thing he’ll lose.

It’s not greed if it’s for the greater good.

Prudence loves Killian above all else, but her mission in life is to serve the Virtues and keep the balance between good and evil. Being appointed leader of the Spell Casters in the dangerous mission to defeat the Sin Lords is her chance to prove to her superiors that she can be the next High Priestess.

The only problem is resisting Killian.

With years of pent up love and frustration tugging at them, will they be able to avoid succumbing to their forbidden mating? And what will happen when the evil which they were sent to destroy threatens to tear them apart forever?

The last rays of sunlight filtered through the stained-glass windows, creating a pattern of dancing colors on the floors and walls. It would have been a spectacle worth watching if she wasn’t so bent on seeing Killian. She was glad they weren’t allowed to be in the same room together, because otherwise, she didn’t know if she would be capable of not throwing herself into his arms. Prudence reached the appointed room. It was not much larger than the one on the other side of the wall. With an impatient flick of her wrist, she brought the ancient scripts on the walls alive with light. The protection spells glowed brightly for a few seconds then began to fade, remaining dim like the last licking flames of dying firewood. Sitting on the padded stool in front of the window, Pru inhaled deeply. She bit her lip to keep from gasping. Surely, she couldn’t smell him in here. Surely, it was only her mind playing tricks on her, recalling his scent from previous encounters. She dropped her gaze to her hands, staring at her quivering fingers which matched the erratic thumping of her heart. She had to control herself. Recall their true reason for being here.

Killian cleared his throat loudly, shattering her thoughts. There was no point in delaying this any longer. Her pain would not ease so she’d just have to bury it. As she reached for the window’s knob, she swore she heard Killian’s labored exhale, as if he too were releasing something pent-up inside him. Was it possible he also felt the same pain as her? Selfish thoughts tried to surface but she beat them back. It was time to focus. Bracing herself, she slid open the window dividing them and any pretense of focus was nearly lost. Eyes blue like the ocean on a clear morning with dark irises and long blond lashes locked with hers. Her heart danced in her chest and her cheeks heated. Every fiber in her body woke up, alert to the presence of the man she loved.

She dug her fingernails into her knees. Dear Gods, she wanted to touch him. Her gaze dropped to his lips which she could see through the fine mesh. Kiss him. Feel his warm mouth against her, breathing life into her. She looked up again and realized he did the same, taking her in like some kind of starved animal. Tears stung the back of her eyes and she averted her gaze. She had to end this quickly, before their emotions got out of hand. She glanced at the ring on her left hand. Silver with a white stone, it represented the order of Spell Casters. She had to keep her mission in mind.

“Why are you here, Killian?”

Silence stretched between them and she wondered if he had heard her.

“You can’t keep the sweetness out of my name even when you try.”

Her gaze flew to his and she saw the familiar spark in his eyes. The one which lit her up inside and out and made the corner of her lips twitch. Daredevil. She clasped her hands together, pressing the pad of her thumb against the ring. Remember.

“Why are you here?” she asked drily, proud that at least her voice didn’t tremble.

“You have received the documents.”

“You would have tried to see me and gotten yourself into trouble otherwise.”

“So you decided to make it easier for me by leaving a love-locked message.”

She could hear his grin. He was holding back a chuckle. Damn man. She pursed her lips. If she smiled, she’d be opening a window of opportunity, giving them both hope when there was none.

“Yes. And—” She paused. Here it went. “I just wanted to make it clear that this is strictly business.”

“Yet, you requested me for the mission.”

“That’s not how it happened. It has nothing to do with us. I would have requested another but—”

She didn’t reply. Her head pounded as she tried to find a way to get out of the mess she had created. She could almost taste the savory sweetness of hope, stretching between them like an invisible lasso binding them together.

“Killian, you know we can’t be together,” she whispered at length.

“I know, but that’s not what I’m asking. Not today.” His tone was gentle, their roles reversed. One moment, she’d had the upper hand, had been dealing the cards, the next, he’d plucked them out of her hand.

“I simply want to know: why did you request me? Why, Pru?”

Wow! Just wow! What a book. Killian is excited to spend time with his mate Prudence on their next mission. Prudence believes the mission should take precedence above all else so she can be the next priestess. But Killian is an awfully strong temptation… This is such a great story! I was so in the mood for some sexy story with a plot I could really sink into. Killian’s Hope is a perfect choice. Killian’s so into Prudence, they are, after all mates but her reluctance is a great tease. Then there’s the world building. This is such a complicated story with multiple moving plots and the author does a brilliant job of winding through that field. I had no problem following along and really enjoyed this story. There’s such a heavy subject about following your ‘career’ dreams or dive into true love. Their romance is beautifully laid out with a intense plot and I could not put down this book. ​ Killian’s Hope is a must read. ABSOLUTE. MUST. READ!

Having read the previous books in the Alpha Protector series, I was excited to get my hands on this one and very pleased to find it is in spirit with the other Guardian stories. The characters show the same courage and passion as their predecessors (some of whom we meet again, which was nice!), and the author generously paints more of those crazy and vivid out-of-this world scenes I&#039;ve learned to love so much in her books. This time, they occur in the lair of the sin Greed, and the question &quot;What is more important: fulfilling your own dreams or sacrificing them for the happiness of your mate&quot; is raised and handled exceptionally well. There are of course realistic scenes depicted in Madrid and Barcelona, too, which this travel lover much appreciates. I absolutely recommend this book and look forward to the next one in the series. Ms. VaLey, you can&#039;t write fast enough!