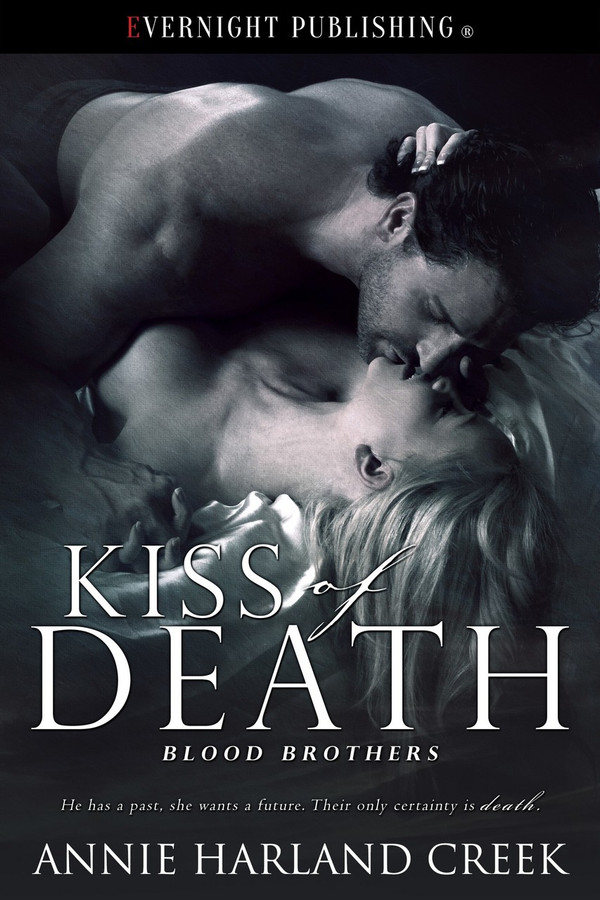 It’s been seven years since Anna Derwent returned home. Seven years away from the father she loved. Seven years she won’t get back. As an empath, she expects to be overwhelmed by the wave of emotions following her father’s funeral but what she doesn’t expect is to inherit, not only his gym, but also his business partner.

Derrick Corel has waited over one hundred years to find the love of his life, never expecting to find her in the form of a diminutive, copper-haired firecracker with a chip on her shoulder.

But Anna longs for a normal life, something he will never be able to provide. He has a past, she wants a future. Their only certainty is death.

“Why would you want to invest in a run-down gym when you could just as easily start a better one in competition?”

“I had no real interest in owning a gym. I only suggested the partnership in order to help your father. Until I met Jake, I was a bit self-absorbed.”

“So, you’re not perfect after all.” Her hand shot to her mouth and her eyes widened. Did I say that out loud?

“I don’t ever remember saying I was.” He leaned closer, his cool breath icy against her cheek. “Did you form that opinion yourself?”

“I thought I was the subject?” he flashed his dimples. “Fine. Ask away.”

“It’s my fault Dad had to take on a partner isn’t it? I crippled him financially with the failed wedding reception.”

“No. No, I don’t believe that.” He slipped his arm around her shoulders and drew her into his body. “The fitness industry is a fickle business. It was a slow year.”

Anna knew she should object to the physical contact but her body betrayed her, warming to his touch. She leaned her head against his cool chest and took comfort in his arms. “So you don’t think it was my fault?”

He kissed her forehead. A small gesture, but filled with intimacy. “Just a twist of fate.”

“Derrick. Do you think … did he ever say anything to imply that he was disappointed in me?”

“Never! Your father loved you more than anything else in the world. He told me so daily in words and actions. Did you know he kissed your photograph every time he entered this room?”

“I have a confession to make, Anna.”

Anna lifted her chin and became lost in his eyes. “Yes, Derrick.”

“Jealous? Of me or my father?”

“Both, I guess.” He lowered his eyes and his eyelashes fluttered a little. The butterflies in her stomach took flight as she listened to his confession. “My own father died when I was only in my early twenties and he had never shown me the sort of affection that Jake had for you.”

Anna took a deep breath before asking, “And why were you jealous of him?”

“Because he had you in his life. And because—even though it was only a pale imitation of the real thing—the photo was a reminder of your love.”

An overwhelming sense of guilt washed over her. She reached up to cup his cheek, gaze into his perfect eyes. “I owe you an apology. I don’t know what’s gotten into me lately. I have been so rude when all you have shown me is understanding and kindness.”

“You have nothing to apologize for. You’ve lost a parent,” he reminded her.

“Along with my manners.” She added with a shy smile. “But that is about to change. Things will be different from now on.”

“For instance?” he leaned back against the sofa, his grip around her shoulders tightening as he twisted a few strands of her hair around his fingers. Her heart missed a beat in reaction to the intimate gesture. She lightly brushed his chest with her fingertips as he kissed the top of her head. She felt safe in his arms. Safe enough to forget her suspicions.

“For instance…” Her fingers traced a path from his square jaw to cup his head in her palm, pulling his mouth down to meet hers, “…this.”

For the briefest moment, he melted into the kiss but almost as fast, he pulled away.

“I wish with all my heart that we could be together Anna but I would only end up hurting you.”

“I’m a big girl, Derrick.” She slid her hand inside his shirt and traced his chest with her fingertips, savoring the feeling as his skin reacted with goose flesh. There was no hiding his attraction. His body told her what his words could not. There was no doubt in her mind that he wanted her just as much as she wanted him. “I can look after myself.” She found his nipple and gave it a squeeze between her fingers, watching with delight as he closed his eyes and moaned.

“No … you can’t.” he pushed her away and held her at arm’s length. “I am a dangerous man, Anna. I deal with treacherous people every day. You would never be safe.”

“You’re like a dog with a bone aren’t you? You won’t give up on this ridiculous notion?”

Anna shook her head. “I have a sixth sense that is screaming at me. You’re a liar, Derrick Corel. The only way you could convince me is if you stay until dawn.”

“It’s not because I fear turning to dust or spontaneously combusting if that’s what you think.”

“No.” Derrick rose from the lounge and walked towards the door with Anna close at his heels.

“You liar. You’re a vampire and you can’t stay because you fear you’ll burst into flames.”

The speed with which Derrick turned almost knocked Anna off her feet. He caught her before she fell—holding her firmly by the shoulders. “I fear you, Anna. I fear the effect you have on me, on my body. I can’t think when I’m in your presence. I can’t sleep without dreaming of you.” He kissed her. Hard. Taking his time as he explored her mouth with his tongue. Anna pressed her body into his, wrapping her arms around his neck. He reached behind his head and grabbed her hands, drawing them together in a prayer position in front of her chest. “But we can’t be together. I can only bring you more suffering.” With that, he flung open the door and disappeared into the night. With a roar of his car’s engine, he was gone.

This author has a way of pulling you into her story and not letting go until the very last page. The tension between the main characters is sizzling, the action scenes are heart pumping and there are some epic plot twists you won&#039;t see coming. If you&#039;re looking for your next great read, you&#039;ve found it. So sit back, grab a glass of wine and succumb to the world of Annie Harland Creek.

Kiss of death is a romantic story of two people who want to be together but they are from different worlds. It is full of romance, drama and suspense. Once you start reading this book, you won&#039;t be able to put it down. An exceptional book very well written. Highly recommended.