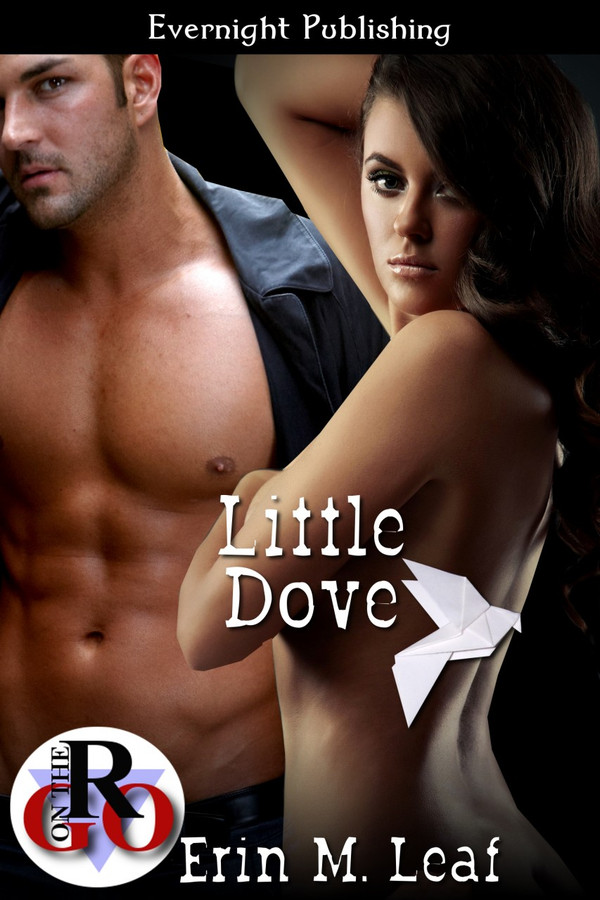 Lila’s friend claims that submitting to a Dom in bed is a wonderful stress-reliever, but Lila is skeptical. So when she opens the door and finds her old crush Theo waiting on the other side, she doesn't know what to do. Since he fails to recognize her, she lets him in, accepting his offer to help her relax.

After he explains that Abby sent him, Lila reconsiders her misgivings about dominant men. When Theo ties her up and woos her with origami doves, she reconsiders her fear of letting go. When he makes love to her, she learns to fly.

“Hmm, looks like I’ll have to tie that one up, too,” he said, standing up.

She stared at him, disbelieving. “Theo, please, don’t—”

He frowned. “You’re not supposed to call me that.”

She bit her lip. Shit. How could she have forgotten so easily?

“I’m going to have to teach you what I want from you, little dove,” he said. He grabbed her red scarf—acrylic, super-soft—her treacherous brain supplied, and wrapped it around her right leg, anchoring the bottom to the ties on her right hand.

She wiggled, but she was completely immobile, except for her left arm. God, why was this making her so damn hot? She didn’t think she’d ever wanted a man as much as she wanted him.

“Stay still,” he commanded, voice still calm, but with a thread of seriousness woven into it. “I don’t want you wiggling out of the scarves, Lila.”

He walked over to her left and sat on the bed. He tucked her left hand between his thighs. Her forearm rubbed up against his extremely impressive erection, but it wasn’t until he thumbed over her mouth that she realized what he’d done. He smiled at her at the exact moment she understood that she was completely at his mercy. She licked his thumb, but he pulled away to toy with her nipples. When he leaned down and sucked on one, Lila cried out, sparks flickering through her body. It was like he’d run a live wire from her breast to her clit. She moaned, pulling on her bonds. She couldn’t move at all. He tormented her for a while, but just when she thought she’d climax without him ever touching her pussy, he stopped.

“What are you doing to me?” she managed to say, panting hard. She wished she could run her hands through his hair.

“I’m teaching you how to let go,” he murmured into her skin.

When he suddenly stood up, she moaned a protest. When he walked over to the door and shrugged on his coat, she frowned. Her clit was throbbing, she couldn’t move, and he was leaving? “Theodore?”

She watched him walk out, body poised on the edge of desire.

Hope is Lila&#039;s best friend and Theo&#039;s sister. Can she reunite two people who are destined to be together? Lila is a hard working woman and with her friend Abby worried about her, she decided a week or two in her friend&#039;s cabin sounds good. Lila needs time to relax, time to unwind, no work, just some alone time. Only, Abby has another idea for Lila and he has a name--Theo. Theo is a Dom and is tired of the relationships that he has had. He wants a real relationship so when Abby, his best friend Steve&#039;s wife, has a request for him, he goes ahead and heads out to the cabin. So when this curvaceous woman opens the door, he wants to get to know her a lot better. However, she looks familiar. Who would have thought that Lila liked a little pain with sex? I loved the interaction, the chemistry between Lila and Theo. Now all Lila has to do is tell Theo who she truly is and the connection that they both have before things go too far. Too bad the story was so short. I would have loved to read more about Lila and Theo and their relationship. This book has an interesting storyline and the characters were wonderful. I found the story to be well-written and sexy. The love scene was exciting with some light bondage, light anal play and some play with a willow. LITTLE DOVE is a short, fun, sexy, quick read and I really enjoyed it. I truly recommend this read.

What a delightful find! I absolutely recommend this one, no hesitation. Lila has no idea that a surprise awaits her when her friend insists that she spend a weekend relaxing in a remote cabin. The surprise is Theo, an utterly gorgeous gentleman ready to take care of everything . . . including Lila. Even more surprising, though she hasn’t seen him in many, many years, she knows Theo: the sexy big brother of her childhood best friend. Now he’s back within reach, and is eager to give her pleasure – and pain – to help her relax body and mind. Awesomeness ensues. Everything about this felt lovely. The setup, the setting, the way both characters were so sympathetic and well-drawn, and their chemistry with one another. Lovely. And the writing was excellent. Top notch, zero complaints, absolutely lovely. Lovely all around. I want to throw that word around like confetti. The kinky content is on the softer side; there’s some light bondage here, some mild switching, some creative and very sexy use of found objects. (Bobby pin nipple torture? Been there, done that, it was nice.) It’s mild, but it’s made obvious that it’s difficult and a little scary to Lila, though she is by no means reluctant. That makes it as intense as a much heavier scene would’ve been with a different set of characters. Some things I especially loved. . . . I loved how Theo genuinely seduces her into it without being sleazy, creepy, pushy, or gross at all. I love how genuinely joyful it all was, and in the scenes from his point of view, loved how happy he was to be there, how his attraction to her was deep, demanding. How it actually distracted him and made him a little unsteady at one point. It felt genuine, not forced. I loved how the author handled Lila’s issues with her body. We’re shown that she thinks she’s fat, but the author doesn’t engage in any of the usual cheap and offensive tropes to reassure us that, don’t worry, she’s not actually fat. She just leaves it at how the character feels, and thus leaves room for readers of all sizes to identify. I am very, very pleased by that, because this is an issue I see mishandled all the time. I love how joyful and happy it all is. Folks, I love a good ravishing, let it never be said I don’t. Non-con is my bread and butter. But this . . . seeing BDSM portrayed as something loving, healthy, and healing is a wonderful thing in a culture that sees it as a thing that only deviants, abusers, and predators do. And I love all the little touches the author puts in to make us understand just how attractive Theo is. It’s not in describing someone’s appearance, point by point, it’s in evoking that sense of smoldering sexiness. And it can come from the smallest things, or the most unlikely. Bottom line, this is a keeper. If you want a short, sweet, sexy read, with sharp writing and a heart of gold, buy this. It’s worth it.

Little Dove is a HOT little piece! Lila is overworked and a bundle of stress. Lila’s friend Abby tries to convince Lila to have a session with a Dom as a stress reliever. Lila resists saying it is not for her. Lila does take up Abby’s offer in regard of using her Cabin. Theo shows up after Abby has sent him to have a session with Lila. Theo is a Dom. The sex was hot and steamy. The chemistry between Lila and Theo almost made the air sizzle between them. The characters were very realistic. The author did a great job of making me feel Lila’s emotions. The one problem I did have with the story is I am not a fan of people lying to others or putting it in writing. Abby lied to Lila. Lila did not want a session with a Dom and Abby went out and did it anyway. I am sure that Abby had Lila’s best interests at heart, but when you lie to a friend how good of a friend are you really? At 34 pages, it is a quick hot read despite my issue with lying. Overall, this was great short story. I would like to see more from these characters. I cannot wait to read more from this author.

Hot fast read! I enjoy the older brother of a friend fantasy. . .so this story appealed in that her best friend Abby sends a &quot;stress reliever&quot; to Lila&#039;s front door! Little do Abby or the said stress reliever (Theo) know, Lila has crushed on Theo for years. As the two connect, literally physically connect, they bond emotionally. While this is a super short read and the premise of the story is all laid out in the summary, this novella is so worth the read. A perfect warm up with a glass of wine for a Saturday night! Enjoy!