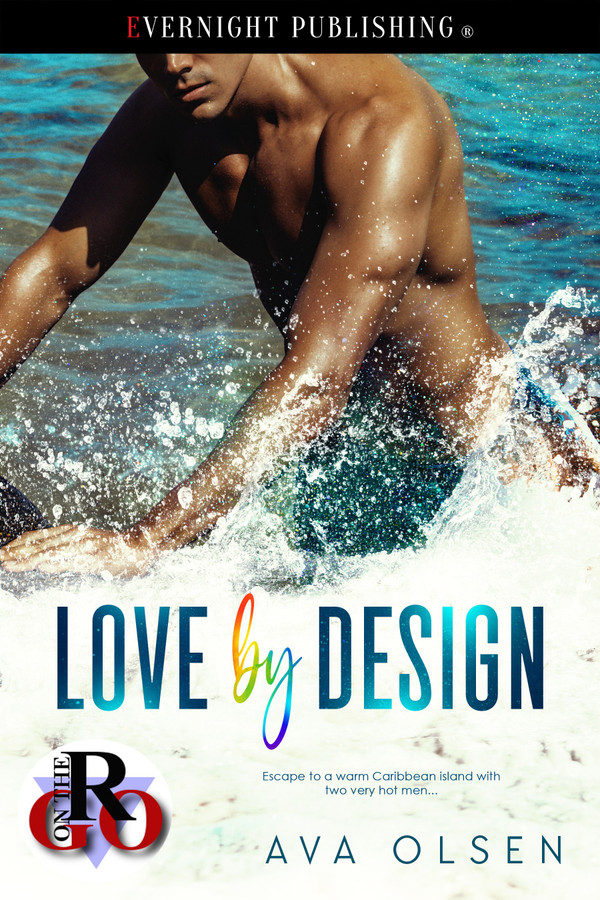 Gabriel Lafleur is a hotelier on the idyllic island of Saint Martin. After a hurricane devastates his business, he reluctantly hires Jackson Yates, an American designer, to complete the renovations. Gabriel is overwhelmed by the gorgeous and charming American who quickly becomes a part of his world.

Jackson loves his job but after years of non-stop work, he desperately needs a break. He agrees to take on the revamp of a boutique hotel in an effort to combine work and much needed pleasure. Soon Jackson is entranced by both the warm Caribbean lifestyle and the very sexy Gabriel.

But Gabriel is leery of travellers who love and leave and Jackson has never felt the need to settle his heart in one place.

Will their love survive the storm that lies ahead?

“I thought we could grab a bite of lunch first, I know a great place by the marina in town.”

“Sounds perfect,” Jackson replied as his gaze caught on the lush greenery, the bursts of tropical flowers, and the gorgeous blue sky above. The island had a rugged, natural beauty and, according to his research, was not overdeveloped. Jackson traveled to many regions where new buildings were added without thought and consequently, it ruined the entire reason why people visited in the first place. He carefully vetted his clients to ensure they agreed with his philosophy of building in alignment with the community and delivering sustainable spaces.

“We’re traveling south, and as you can see, the housing is a bit denser the closer we get to the capital, Marigot.” They continued down the road and passed a colorful food market packed with people. Gabriel waved as they drove by, and many of the shop owners smiled and waved in return. Jackson relaxed for the first time in what felt like forever.

They passed row after row of houses under construction. “If you don’t mind, could you tell me a bit about the hurricane that hit last year and how the island was affected? I noticed that there’s still a lot of construction going on.”

Gabriel’s arms tensed and his grip tightened on the steering wheel, so tight that his knuckles turned white.

“It was a category three. Winds knocked out the power on the entire island for over a week. We had major flooding, and many buildings suffered damage that led to total re-builds, as you can tell. Thirteen people lost their lives.” Jackson was going to ask further questions but decided it was best left alone for now.

“I’m sorry. I’ve experienced tornadoes, and I know how devastating these natural disasters can be.”

Gabriel nodded but said nothing. The capital city came into view, with a variety of buildings painted in bright, tropical colors. They drove down Main Street and passed a marina, and the briny smell of the salt air hit Jackson. He took a deep breath and savored it. Gabriel slowed down and pulled onto a side street to park.

They both jumped out of the Jeep and walked down a narrow cobblestone path until they reached a clearing at the main road and the marina came into view again. Dozens of boats bobbed up and down in the tiny harbor. Jackson spotted a cute little cottage at the very edge, painted in bright pink and white, with a thatched roof and a patio that overlooked the water. A small sign with artfully painted roses spelled out Rosé All Day. The patio was packed with couples, groups, and singles sipping on cocktails in the midday sun. Jackson immediately fell in love with the picturesque hideaway. He was so charmed by the place that he reached for his phone and took a photo.

“Say cheese!” he said to Gabriel, who turned his surprised face toward him. He couldn’t help but stare at Gabriel’s lean form and shy smile. For the first time in his career, Jackson was tempted to break his rule about dating a client. Maybe just this once.

“Give me some warning, Jackson. I probably look a mess!” Gabriel nervously ran a hand through his thick wavy hair and tugged on his shirt.

“No way, you’re far too stunning to take a bad picture.” He winked and Gabriel’s face flushed. Well, that’s a pretty sight. Jackson’s heart rate picked up again, and he was suddenly out of breath. “Here, look for yourself.” He held his phone out to Gabriel, who moved closer, and the yummy scents of coconut and vanilla filled his senses. The man was not only beautiful but smelled good enough to eat. Speaking of eating… Jackson’s stomach took that inopportune time to growl very loudly. Gabriel chuckled and, for the first time, a wide grin spread across his face.

“Okay, then, let’s get you some food before you pass out from hunger or this heat.”

Gabriel led them up to the entrance and was greeted by a slim man in a white chef’s jacket, his shaved head gleaming in the sun and highlighting the colorful tattoos on his neck and forearms. The men kissed on both cheeks and spoke in rapid French, Gabriel gesturing to the table closest to the water. Jackson understood some of their conversation. That was the beauty of travel—you picked up a few languages here and there.

“Jackson, this is Duval Blaine, the chef and owner of this establishment. He’s also one of my oldest friends. Duval, this is Jackson Yates, the designer I hired.”

Duval eyed Jackson with narrow appraisal and offered a brief smile. Hmm. The friend was protective of Gabriel for some reason. Interesting. There’s a story there for sure. Jackson smiled anyway and shook Duval’s hand, ignoring the painful squeeze of the man’s grip. Jackson’s momma had taught him good manners, and he never let that go.

“A pleasure to meet you, Duval. You have a beautiful place here.”

“Thank you, Jackson,” Duval replied and looked down at Jackson’s cowboy boots. “Nice boots but a bit warm for our climate. You may need to go shopping while you’re here.” He smirked.

“I don’t leave home without them. However, I’ll probably put them aside for a cooler night and wear my running shoes instead.”

“Yes, well … welcome, please.” Duval seated them at the small table closest to the water. “We have ahi tuna tacos today as well as grilled prawns. I’ll have your server get your drink order to get started.”

Jackson watched the chef as he visited each table, checking on his guests and chatting away. The island had a relaxed and welcoming atmosphere, and Jackson felt right at home.

Until he turned his attention back to Gabriel and felt the power of the man’s dark glare.

I guess the warm island welcome is over.

Can&#039;t go wrong with a hot island romance! I adored this novella, especially with it being set on Saint-Martin with all its French-island flavor. Gabriel is wonderful as the French hotelier, and the wink-wink name of the hotel (L&#039;Arc-en-Ciel) in an mm novella is magnifique. Gabriel has been hurt before and it really came across how deeply he&#039;s been wounded and how hard it is for him to believe that he and his home could be desired. I really felt for the other main character, Jackson, who loves his job but has found himself stretched thin by it. He has good friends in L.A., but his vacation to Saint-Martin allows him to see beyond what&#039;s right in front of him. The sex is smoking hot *fans self*, you can really feel just how much these two are into each other. The cast of supporting characters really makes the novel, from the overprotective chef to Jackson&#039;s besties in L.A. Do yourself a favor and escape into this island paradise full of love (&amp;boinking!), you won&#039;t be disappointed!

This was a sultry Caribbean Island novella. This is the story of a french speaking hotelier and a charming Designer who become entranced with each other over the month they are together. Full of delicious meals, skinny dipping, and cozy nights amidst a tropical storm. Fast-paced but still feeling complete, this was a wonderful short story.

This is such a sweet love story. These two me found what they needed by chance while meeting for work. It was so pleasant and entertaining. I received a free copy of this book via Evernight and am voluntarily leaving a review.

Unforgettable You by Ava Olsen