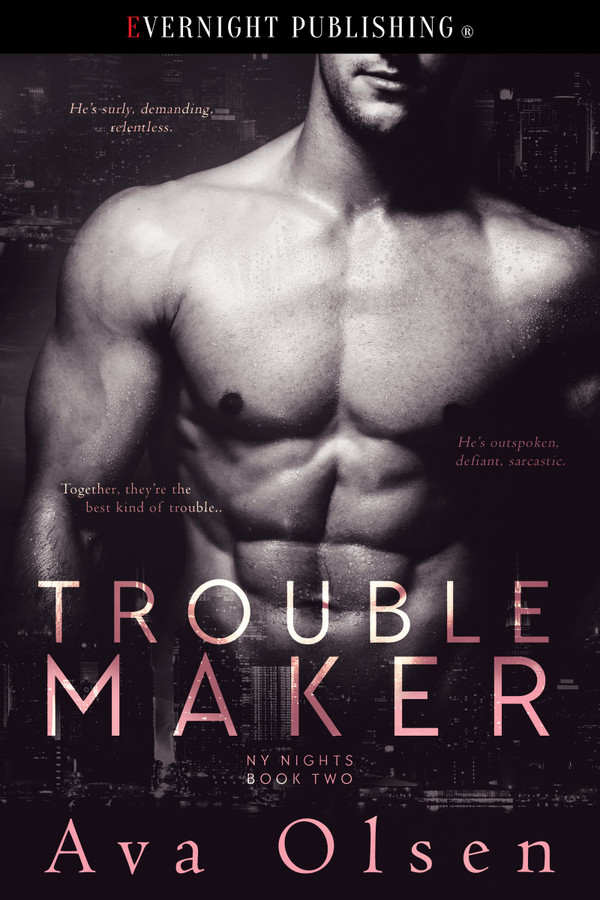 Mac Duran runs a communications empire in New York City and lives to work. But ever since his best friend’s wedding, Mac wonders if there’s more to life than closing business deals. One man in particular grabs the CEO’s attention but misunderstandings from first impressions prove difficult to overcome.

Luca Santino is an event planner who loves love and excels at organizing chaos. He has big dreams but finding a man to share them with proves elusive. Until a work crisis pushes Luca into Mac’s orbit, and a heated clash of wills sparks deeper desires.

Together, they’re the best kind of trouble.

Volatile chemistry ignites a love unlike any other. But Luca’s been burned by men who won’t commit, and Mac isn't sure he’s ready to let go of his workaholic ways. Are they strong enough to reach for their hearts’ desire?

Luca was in the office by 8:15. A bit earlier than his normal routine, but since there were two book launches on the calendar next week and marketing plans to update, a lot of work had to be done. He just needed an extra dose of caffeine to help him deal with work and the stubborn Mr. Duran.

He walked down the hallway toward the kitchen when he suddenly overheard Mac talking. He couldn’t make out all the words, but he heard enough.

“Luca … smart-mouthed, irritating pain in the…”

He’d show him smart-mouthed and irritating. So Luca decided to mouth off, confirming Mac’s opinion. Then he heard another person’s deep laughter and wondered who it belonged to. It was all so clear when he set foot inside the newly improved office space.

“Luca, you remember my grandfather, George, from the wedding,” Mac said as he gave him an icy glare.

“Good to see you again, Luca. I love the changes you made in Mac’s office. It will ensure he is more productive from here on out,” George said as he offered a brief smile and shook his hand.

“Thank you, Mr. Duran, it’s nice that someone appreciates my efforts,” he said and smiled at the older gentleman in return. George was a kinder, greyer version of Mac. With thick silver hair and the same green eyes, handsome ran in the family. George was dressed casually like Luca, in jeans and a navy V-neck sweater.

“No Mr. please. It’s George.” He paused. “Thank you for helping my grandson. He’s prone to stubbornness and overworking, and I worry about him.”

“And where do you think I got that from, hmmm?” Mac joked and got up from his chair to walk around the desk, leaning back on it and crossing his arms and legs.

“Brat,” George said teasingly, and Luca couldn’t help but notice the look of love and respect the two had for each other. “Anyway, I best be off. I have to drop by my accountant’s, then off to yoga class at ten and lunch with my agent.”

“Is there a yoga studio nearby you can recommend?” Luca asked. “Someplace that takes drop-ins? I’m an avid practitioner, and I love to try new classes.” Given how stressful he felt around Mac lately, he needed a class ASAP.

George nodded and pulled out his phone. “Give me your number and I’ll text you the details.”

“Thanks, George. Maybe we can take a class together while I’m here. I don’t know anyone, and it would be a great way to socialize,” he said, then noticed Mac’s scowl deepen.

“Sounds great. I look forward to it,” George said to Luca before he leaned over to hug Mac. “Take care, son. Don’t work too late.” He winked and waved as he headed down the hallway.

“Is there anyone you can’t charm?” Mac asked as he stared at him with those pale green eyes, clear and calm and much more rested than yesterday.

“You, apparently,” Luca rebutted and quickly left the room to head to the kitchen. He smelled rather than heard Mac behind him. Luca carefully prepared an espresso but refused to turn around. Between Mac’s warm, edible scent and the brewing coffee, Luca wanted to let out a loud moan of pleasure but kept himself in check.

“I’ve decided to leave my office as is. You were right. Again,” Mac murmured as he moved in closer. Luca held his breath. He turned slowly to find those stunning green eyes perusing his face, and suddenly, his ears felt warm. He took a big gulp of his espresso to distract himself and winced at the heat.

“Let that cool a bit. After all, you don’t want to burn that sharp tongue of yours,” Mac said with a smirk.

“True. I wouldn’t want to deprive New York’s hottest men of its talent.” He stuck out said tongue and sauntered around Mac. Jesus, he’s got me acting like I’m twelve.

“Do you have any other comments about my behavior, or can we get back to work?” Luca said as he placed one hand on his hip. Bring it on, Big Mac. I can argue all day long.

Mac and Luca are like oil and water. They have friends in common who they both care deeply about. They have an attraction to one another that neither wants to deal with. But when Mac is having problems keeping an assistant and working himself to exhaustion and Luca is staying at his friend Wes&#039; place while Wes and Ryker are on honeymoon, Wes prevails on him to help Mac. Proximity while working together helps them to give in to their strong chemistry and to realize that they love one another. But Luca wants a family and Mac having been burned by his parents when he came out is not sure he wants one. They are so good together that it was good to see them figure out that they needed to take steps to be together. This was a fun story to read. I gave them a strong 4.5 stars.

What a great story. Two fiery and obstinate men who turn each other on as much as they drive each other crazy. They are great at pushing buttons and providing their opinions, but they aren’t so great at sharing how they feel. It results in a lot of passion. Mac, the grumpy workaholic who is loyal to his chosen family and will do anything for them, even if the world thinks he’s ice cold. Luca, the feisty assistant who isn’t afraid to speak his mind, but will fight for the people he loves. They are both great characters. I love their banter and their bickering. It’s a lot of fun, and you just know they will be great together when they finally give in to love. I’m really enjoying this series and all of the characters of this found family. I’m looking forward to the next story with Cal and Grey, it’s been teased since book one, so I’m ready for it.

Wow!!! That’s all i can even think to say! Just wow!!! I loved this book even more than the first one and! This book was opposites attract to a T. Mac and Luca are literal perfection together. They fit so perfectly. Their chemistry is on fire and they are so very spicy together! Sparks absolutely flew between these two incredible men! They were funny, sweet and so very loving. I devoured this book in just 2 days! It was truly amazing! I am absolutely loving this series/world this amazing author has created and I’m dying to read the next book. I will have to patiently wait till it comes out. But I am SO ready! I received a copy of this book from Gay Romance Reviews, and this is my honest review. POV: 3rd Person Dual POV Standalone or series: Book 2 in the NY Nights series

Second in series (NY Nights), can be read as a standalone but might be more fun if read in order due to shared secondary characters. Close proximity. Dual POV. Trying to start up his event planning business, Luca agrees to be the temporary PA for publisher Mac, even though he will have to try and ignore the attraction he feels for the demanding workaholic. Mac doesn’t want to need Luca, but the feisty, sexy man has him organized and drooling in a matter of hours. Luca only does long term relationships and he hopes to start a family once his business takes off, so his few weeks in New York having a fling with Mac does not fit into his plans. There is good push and pull between Mac and Luca, with chemistry and banter. More emotional communication would have pushed this book into a higher rating for sure. Both Mac and Luca are likable and feelings run hot fast with affection and steam. Well written stories so there is no doubt I am interested in the third book which is planned for the series

Seeing Mac and Luca bicker in Novel Affair, I couldn&#039;t wait to see how explosive they were together and they didn&#039;t let me down. Workaholic Mac has his two friends and his grandfather and his work and that&#039;s it. When Luca suddenly appears to be his temporary PA, Mac doesn&#039;t know what&#039;s hit him. Luca stands up to him and won&#039;t take any of his crap. Luca has a big Italian family, a boss who&#039;s a close friend, and is in the process of getting his own events planning business up and running. Asked by his boss to help Mac, he reluctantly agrees because Mac pushes all his buttons, just as he does Mac&#039;s. I love the push and pull between them, the heat and the humour, and the warmth and sense of belonging that each generates in the other. It is not all plain sailing though, but they manage to work things out in the end. I liked seeing more of Cal and Grey, and Mac&#039;s grandfather was a lovely character. I&#039;m eager to read Cal&#039;s story now, with everything he&#039;s been going through threaded through Novel Affair and Troublemaker, and I want to see him get his HEA

Love by Design by Ava Olsen