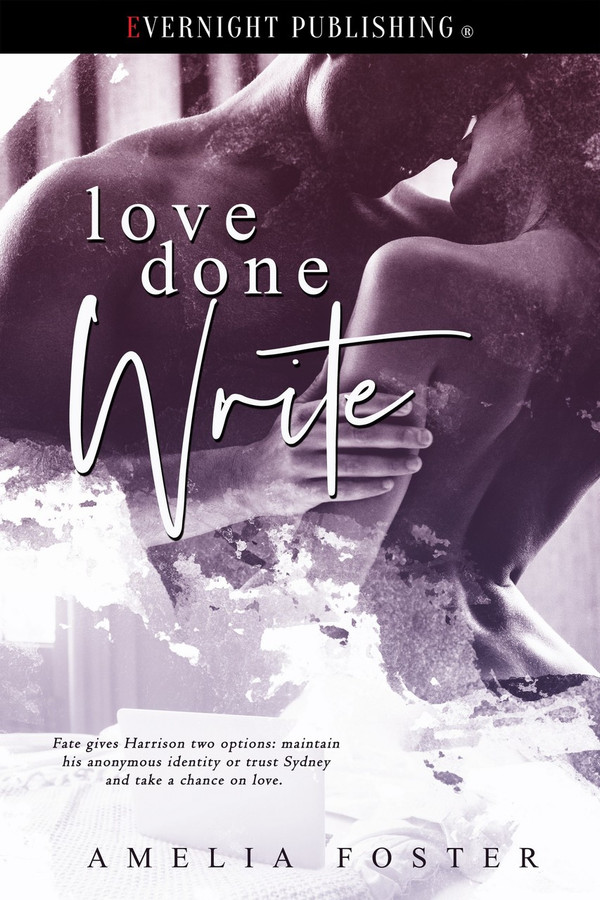 Reading every new book by H.R. Reve consumes twenty-four-year-old stylist Sydney Bordelon’s free time. After the latest installment, her inebriated self thinks emailing him—hiding behind username RedLace24—detailing the effect of his words on her libido is a good idea.

Being a forty-two-year-old English professor at a private university and writing erotica makes Harrison Winslow guard his identity closely, never interacting with fans. Until RedLace24.

Flirtatious emails and steamy sexting culminate in a weekend of hedonistic sex and surprising intimacy. Harrison struggles to keep the truth from Red, especially when she discloses her name and opens up to him, revealing that she’s an aspiring author.

When fate intervenes and his truth is exposed, Harrison must channel the romance of his alter ego if wants to retain the woman who excites his body and challenges his mind.

The object of his obsessive thoughts laid a hand on his arm, halting his movement. “My bag is still in my car. Just let me run out and—”

“No.” A single word. One syllable. But it exploded from his mouth with more force than a volcanic eruption, ruining his attempt at playing the cool, seasoned one-night-stand kind of guy. He cleared his throat and commanded his voice under control. “No, you don’t need to. I can have an attendant send someone to retrieve it and bring it to our room.” Manners, chivalry, and all the all-too-real possibility that for all her flirting she may be looking for a way out filtered through him. “That is if you still want to…”

She reached up behind his neck, grasping at the short strands of hair clustered at the nape. Her tongue darted out, running along the full bottom lip that had taunted him all through dinner, begging for him to take a taste. Without a word, she lifted onto her toes, kissing him hesitantly at first. Fire ignited at the site of their joined mouths and swept through his body. Never before had a brief contact created such an intense reaction.

His fingers landed on her hips, pulling her closer. The groan from the back of her throat as she came in contact with the proof of his desperate need urged him to deepen the kiss. His hands itched to travel, to feel the full ass he’d unabashedly stared at as he’d intentionally walked half a pace behind her. But the infinitesimal part of his brain that still spoke logic through the haze of lust reminded him of their very public location in the hotel lobby.

Hating every centimeter, he slowly pulled away, breaking the kiss before offering one last swipe of his mouth against hers. Harrison closed his eyes that were hungrily fixated on her heaving chest, pressing his forehead to hers. “As much as I would love to continue this right here and right now, we need to at least go to our room before we get kicked out for indecent exposure.”

A seductive smile curled her swollen lips and she peeled his hand from her hip, lacing her fingers through his. “Then I think we better get upstairs.”

If he thought she’d outdone his flirting capabilities at dinner, he was sadly mistaken. The agonizingly long elevator ride was a testimony to her ability to torture him covertly. Standing in front of him, she offered an elderly lady hair styling tips—at least he learned her profession—and regaled her with client stories. The entire time, her hand softly stroked up and down the ever-hardening length of him with feather-light touches.

With as much control as he could muster, he graciously bid the older woman a good evening and tried his best not to drag Red to the room. He was thankful the key card slid into the lock and worked easily on the first try.

Two steps into the room were as far as he was able to make it before the need to touch her—to really touch her—the way he’d been craving all night took over. He pressed her against the door, grabbing her partially exposed left thigh and lifting it over his hip, rubbing the erection she had made sure to bring to an aching need against her core. When she tilted her head back against the wooden surface and moaned, he couldn’t help but smirk. “Is that what you wanted, Red?”

“Yes!” She pulled at his neck, bringing his mouth to hers once again, this time with a frantic desperation.

He slid his hand along her thigh, pushing her skirt up with the movement before reaching one ass cheek he was delighted to find exposed. Red whimpered as his fingers sank into her flesh.

Harrison ignored the protests of his body as he broke their kiss. Weeks of build-up on top of his lackluster sex life before her meant their encounter would be over far sooner than he liked if he didn’t rein in his libido.

He released his grip on her and took a few backward steps into the sitting room of the suite. Resting against the arm of the sofa, he crossed his ankles and slid his jacket off, tossing it aside. His gaze raked over her once then again at a much slower speed, taking in every inch of her golden, tan body. “I love that you wore my color but … take that off, Red.”

She pushed off the door, her hips swaying as she walked toward him at a leisurely, deliberate pace. Her arms crossed in front of her and she reached for the hem, pulling the dress over her head and tossing it across the room in one smooth motion. She stopped just out of his reach, clad only in a crimson lace thong and gold heels. “Better?”

Self-control be damned, he grabbed her around the waist, lifting her off her feet and holding her tight against his body. A squeak escaped her lips as her legs wrapped tightly around him. An all-consuming need drove him to carry her into the bedroom and deposit her on the bed. He hovered over her for a moment before giving in to the screaming need of his body to touch and taste every inch of her.

His lips made a trail down her jaw to her neck, nipping at the juncture where it met her shoulder. He continued down to the full, rich globes that had teased him awake in the middle of the night more than once with the throbbing effects just the sight of them had left on his body. He suckled on the dark chocolate bud on the right while his hand wandered farther down, diving beneath the scarlet material she had worn for him. Just for him.

This novella is read-it-in-front-of-a-fan hot! For those who like a lot of sugar with their spice, Amelia Foster doesn’t disappoint. A sweet, sexy romance with all the feels in a snack-sized package.

What a SEXY little read this was! Sydney is precious and Harrison is so utterly perfect for her. The hot texts lead to hotter IRL encounters and the storyline is so fun! Delicious!

Man oh man is this a hot little read! This may be a short story, but it&#039;s length doesn&#039;t short change you in anyway. Syd and H.R.&#039;s &#039;relationship&#039; begins in the most unusual of ways, via an online chat. She&#039;s a super fan of the erotic novels he shares and his well written words are fuel to her fantasies, along with the mystic surrounding him. When the two meet it&#039;s fireworks! Hot and steamy. And while H.R. may be the older of the two, Syd teaches him a few thing as well. I adored how well they clicked in and out of the bedroom. Their initial meeting may have been only for a hook-up, but both respected it way more and it showed in how they wanted to please each other. Did I mention this story is hot??? Anyway if you&#039;re looking for a spicy read with a fulfilling HEA, you want to get this. You won&#039;t be disappointed.

Sydney is RedLace24, an avid fan and reader of HR Reve’s spicy writing. She’s commenting on his blog posts. Harrison is an older (he’s in his forties) English professor at a private university in the south writing naughty bits. Will he make all her dreams come true? Recommend.

Could not put this one down and could have kept reading for days. HR and Syd&#039;s story is everything: sexy, sweet, funny, emotional and HOT!!! Can&#039;t wait for her next release.

The Writer's Desire by Dorothy Kollat