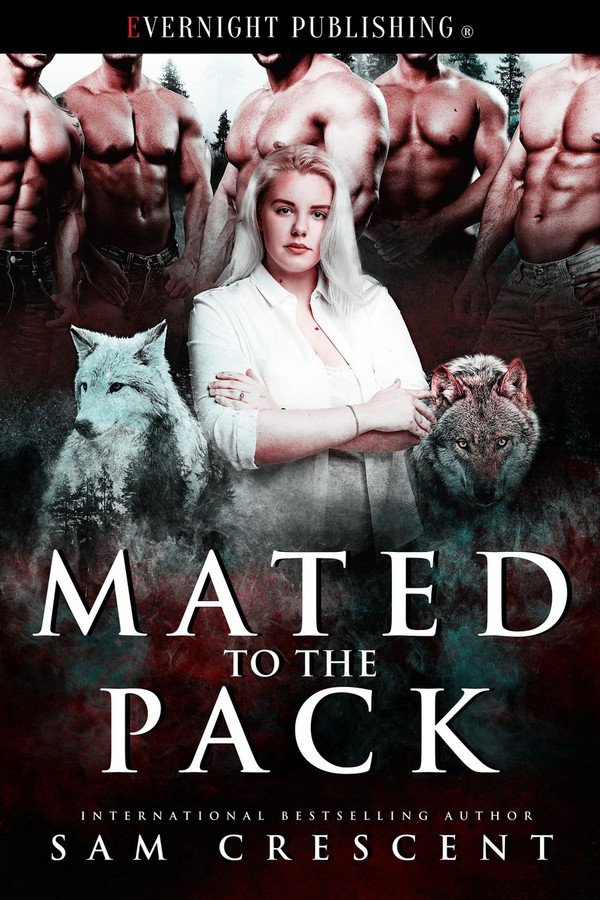 Lucia is running for her life. Human hunters have destroyed her pack, and she has been ordered to run, to survive. She runs for two days straight without stopping—until she ends up crashing right into Luther Knight’s arms.

The Knight pack has five men, bound by their loyalty to each other, with Luther being their alpha, the strongest of them all. He knows what it’s like to be at the mercy of the human hunters and has vowed to kill all humans on his lands.

With Lucia in his arms, he knows she belongs to him, and not only does she belong to him, but she is the female for all of them. Even with the danger that surrounds them, they know what they want, and Lucia feels it, too.

However, the humans are closing in, and Luther’s desire for revenge, his need to kill every single one of them, grows. When Lucia says it’s her or the hunters, she is shocked when he tells her he doesn’t do ultimatums and walks away.

The hunters are close. Will the Knight pack make it out alive, or die at the hands of the monsters intent on abusing them?

She opened her eyes, and he stared at her.

“You know what this means, don’t you?” he asked.

“Don’t lie, Lucia. You and I both know what it means. Why you’re not afraid of us and why you’ve spent the last few hours being so fucking wet.”

“We’re not human, Lucia. We don’t work like them. We have our own timetable. It doesn’t take us months or even years to work out that we are mates.” He pressed a little closer. “I can sense her. She likes me.”

That “she” was her pesky little wolf that wanted to be mated and fucked.

The truth was, so did she. She wanted to be fucked, to feel his cock sliding so deep inside her.

This made Luther moan. “Damn, I knew you were special the moment I caught your scent. I’ll make it good for you, I promise.”

As his lips touched hers, Lucia melted. There was nothing more to be done as his tongue traced across her mouth. She opened up to him, and he took the plunge, sliding his tongue in and making her want him even more.

She released her hold on the tree and gripped his arms. He surrounded her, holding her close, and it felt so good. She knew in that instant why people mated. Why they came together. If it felt as good as this kiss, she was already addicted.

Luther’s cock was so fucking hard he thought it was going to tear through the denim of his jeans. She tasted like warm honey and vanilla, such an addictive flavor, and to know she was pure, that no other wolf had ever tasted her, well, that was just the cherry on top. He wanted those juicy curves wrapped around his body, riding his cock. He’d give anything to see her tits as he plowed inside her. Knowing no other man had touched her, it drove him crazy to claim her untouched pussy.

Sinking his fingers into her hair, he gripped the back of her head and kissed her harder. Their teeth clashed together, and he didn’t stop.

They met each other halfway, his tongue stroking hers, tasting her.

Pressing her against the tree, he lifted one of her thighs and placed it over his hip, needing to be inside her, willing to do whatever it took to feel her tight heat pressed against his cock.

It wasn’t enough, but for now, it would do.

“You’ve started without us,” Luke said, hunger in his voice. His gaze was focused on Lucia. Luther knew without a doubt how much his brother wanted her. Luke hadn’t hidden his desire for her.

Luther didn’t stop kissing her. He took his time, aware of the pack surrounding them, watching them.

Slowly, he broke from the kiss.

Her lips were swollen and her eyes glazed over.

She licked her lips, and her gaze fell from his to look over his shoulder, staring at his men.

When hunters decimated her pack, Lucia ran until she physically couldn’t go a step further. Unknowingly, she had strayed onto the land of the Knight pack. Five wolf shifters, not related by blood but a pack in every way they protected their land and each other. Lucia’s fear and the scent of death clung to her – screaming like a beacon to the five men. When they realise she’s theirs, they’ll do anything to protect her, but can she handle being mated to the five Knight men? I found this to be an interesting and well-plotted werewolf story. While the dynamics of the paranormal world were slightly different I had no trouble getting up to speed with the setting. I did feel a little as if the plot about the humans who slaughtered Lucia’s pack and sexy shenanigans of Lucia and her reverse harem overshadowed the world-building. Certainly this wasn’t bad enough to affect my enjoyment of the story – but I would have liked to know more depth about the world and how the various shifter packs interacted and how they fitted in with the human world. That said, I feel the author did a good job of juggling the plot and relationship between the five men of the Knight pack with Lucia. With so many men to one woman it would have been very easy for the characters to not stand out on their own merits or have one or two of the men be far more active and memorable than the others, and I was pleased that I didn’t find this was the case here. I was surprised and pleased that after Luther – the pack alpha – initially claimed Lucia as their mate the five men gave her some space and time to wrap her head around all the changes that had happened practically overnight. It also helped me as a reader get a feel for the pack dynamics and separate the five heroes into individuals and not just as a pack. While I didn’t enjoy how Lucia misread the pack giving her space to grieve and come to terms with being claimed by all five of them – that part felt just a little too clichéd for my liking – I was grateful this misunderstanding didn’t last long and was quickly followed by plenty of steamy moresome sex that even Lucia couldn’t misinterpret or twist into more conflict. I found the sex scenes to be spicy and intense – but not envelope-pushing and feel most erotic readers should find them suitably hot and interesting. I also rather enjoyed how Luther – for all his alphaness and bluster and hardness – was the one who craved Lucia’s love and acceptance, even while Lucia was the character trying to solve the dilemma with the humans. Normally it’s the hero trying to fix the problems and the heroine agonizing over the emotions so I found it refreshing – and very well written – how these usual roles were so wonderfully reversed. Fresh and quite different, I enjoyed this reverse harem style of story.

Lucia has been on the run for days after her whole pack was wiped out by the humans. She&#039;s on the run, tired and scared when she runs into another pack. The Knight pack. Rumours have been going around that no one is allowed on their land and anyone that dares will be killed. But what she didn&#039;t count on was that she wasn&#039;t just mated to the alpha but she was mated to other 4 guys in the pack as well. Even though the alpha Luther is a bit suspicious of Lucia he can&#039;t deny that she is his mate and he will do anything to protect her from anyone especially the humans. But when that day comes will they be able to protect their mate and themselves? Lots of anxious moments in this story, you really didn&#039;t know what was going to happen next in this story, it really made me finish the book in one go. The only thing I was a bit hesitant about was the fact that she was mated to 5 men. But it seemed to all work out for them! :-)

Lucia has been on the run for 2 days. With her pack killed by human hunters, she needs to get as far away as she can. While running, she runs right into Luther Knight, alpha of the Knight pack. Luther, Billy, Ryan, Noah and Luke can sense that Lucia is their mate but they don&#039;t know her story. The story evolves over time and I like the fact it didn&#039;t jump right into sex. As the story plays out, we find out about each guy and why they are together in the pack and we find out what happened to Lucia&#039;s pack. At times, I wanted to reach through my kindle and smack Luther upside the head for being so stubborn. When the humans come onto Knight land, will the guys be able to save Lucia and themselves? I was truly on the edge of my seat, turning pages, to see what was going to happen and how it would play out! So good!!! Loved it and I loved the epilogue. Those just tie the whole story together for me!

Lucia ran after her pack was decimated by hunters....ran right into the arms of the Knight pack, who were her mates.... but it didn’t end there. Sam Crescent wrote this book so wonderfully.... it was steamy, and loving and exciting. Loved this book!

Mated to Her Bully by Sam Crescent