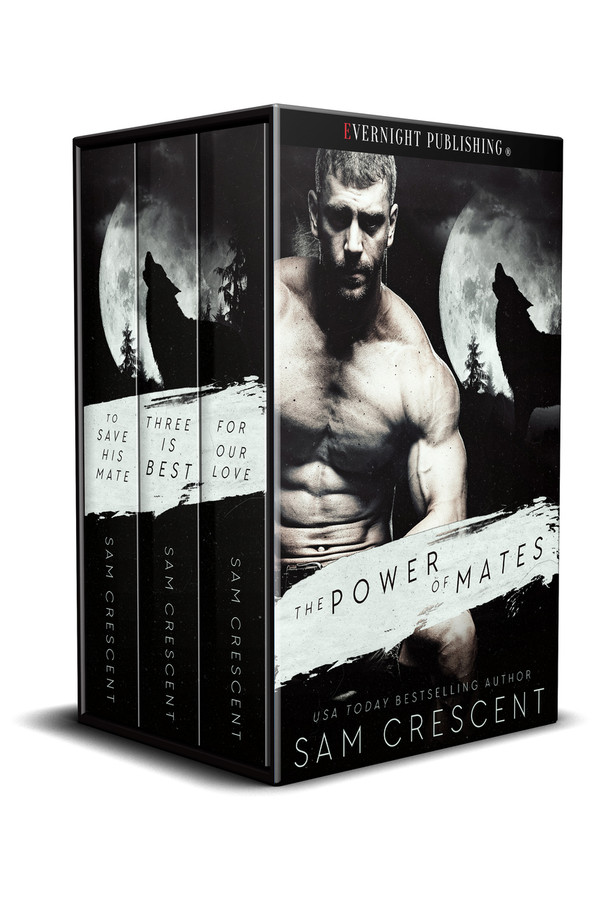 Before they can be together, they must rid their pack of the evil within...

Sean Ridge, the Alpha’s son, harbors a dangerous secret about his long-time best friend. Ben, the son of their pack’s Beta, also happens to be Sean’s destined mate. However, same-sex matings are forbidden by pack law and those who defy tradition risk death. To survive, Sean and Ben must live a lie. But they’re not the only two who want pack law to change. A group of wolves are planning an uprising to overthrow the evil Alpha.

Will Sean and Ben choose to run and forever look over their shoulders? Or will they take a stand and fight for the right to choose their mates and live in the open?

Three is always better than one!

Reese is the Alpha of the Riser Woods pack, and he has a crush on a human waitress, Bethany. He can’t have her, but he can’t stop looking at her.

Draco finds Bethany attractive, but he sees that his Alpha wants her, and keeps his distance.

Alex, he’s her boss, and he’s a Bear shifter, and also an Alpha.

All three want her, but none can have her. Then one night, Bethany is attacked by a mysterious wolf, and the changes in her body are instant. All three men feel her, crave her, need her. It goes against all laws, but there’s no stopping it. Bethany is mated to three men, and all of them will do everything in their power to protect her

What will they decide when the two choices are the coward’s way out or certain death?

When Sandra looks into the eyes of a killer, she believes her life is over. The Cure is chasing down wolves, witches, warlocks, and anyone who threatens their control of the world.

Lucas has been watching Sandra for a year. She’s his mate, even though he’s a vampire and she is a wolf. He will do whatever it takes to protect her.

With no choice but to accept Lucas as her mate, Sandra will do everything to fight The Cure that is destroying them. Can a mated vampire and wolf save the day? Or are their days of being mated numbered?

These works are previously published (To Overthrow Evil, Mated to Three, The Cure). They have been revised and edited for Evernight Publishing.

FOR OUR LOVE: When Sean Ridge and Ben Frizz were seventeen they witnessed their fathers murdering two men just because they were mates. Even though their fathers were the Alpha and Beta of the pack this disgusting display proved to them once and for all that they really were nothing but evil! They both knew they were mates and they both knew that whilst their fathers were alive they could never acknowledge it because their fathers had gone one step further by outlawing same sex mating’s. When they were twenty-one they realised the time had come to confront their fathers. They have been watching the way they ruled the pack and they honestly can’t stomach the evil cruelty anymore. They know the only way for not only themselves to be mates but all the other mates that can’t be mates is for their fathers to be eliminated before they give themselves away and they’re killed. Once the decision is made they recruit other members of the pack. This is one story you really must read to get the full impact of the undercurrents that run rampant within this dysfunctional pack. THREE IS BEST: Reese, Alex and Draco are all in love with Bethany Young. Reese is the alpha of Riser Woods pack, Alex is the owner of the diner Bethany works as a waitress in and Draco is Reese’s second in command. They all want Bethany, but they can’t have her especially Reese and Draco. As wolves if they mate with a human they will be banished from the pack. This doesn’t affect Alex as he’s a bear, but he won’t touch Bethany while Reese and Draco can’t. Bethany is attacked on her way home from work one night, because of being attacked and bitten by some type of animal instead of dying Bethany gets stronger and becomes half wolf/half human. After the attack the men discover the reason for their attraction to Bethany is because she’s their mate. It’s not an easy road after the discovery because they have one of the pack women to deal with, Mischa has wanted Reese to mate with her for a long time and now that Bethany is here she knows that is never going to happen. So, not only do they have to help Bethany with accepting that she is now a werewolf, they must deal with a jealous Mischa who stirs up enough trouble that the pack try to kill Bethany for being an abomination! Once the pack accepts Bethany as their alpha’s queen the decision to banish Mischa is very easy. It takes a lot of love and understanding for Bethany to come to terms with the way her life has changed, she has three mates, she can now change into a wolf and they still must find her attacker! TO SAVE HIS MATE: Sandra King is a wolf and right now she’s terrified! She has just witnessed her pack being murdered by a scourge of vampires including members of her family. This is when she meets her mate Lucas, who happens to be a vampire. Vampires and wolves have been at war with each other for hundreds of years, every wolf knows to stay away from vampires because they’re killers. Sandra is shocked when Lucas explains to her that there was a time that vampires and wolves were at peace, they even mated with one another. Sandra has a hard time believing Lucas when he tells her about a group of vampires calling themselves The Cure. The Cure kidnapped wolves, kept them in cages and fed on their blood so they could walk in the sunlight and destroy shifter’s, human’s and witch’s. Once Sandra is convinced that everything Lucas is telling her is the truth they begin the fight to bring The Cure down. Even though they’re newly mated Sandra and Lucas don’t have a chance to enjoy it. They join forces with other shifters and witches to go to war against The Cure. The Power of Mates is a very enjoyable trio of romance story’s with completely different scenarios and outcomes. I have no hesitation in urging you to get you copy, find a comfy spot and read!!

Awesome book as always. This author always gives great books. I&#039;ve never been disappointed. Can&#039;t wait for the next book.

WOW - The Power of Mates: Boxed Set - Three stories by one incredible author all in the one box set ! Perfect! #1 FOR OUR LOVE - Previously titled - To Overthrow Evil. I felt so much for Sean and Ben destined mates who had to hide that they are mates because the evil alpha within the pack makes any same sex relationships outlawed as he views them as an abomination which is terrible! Sean and Ben struggle to continue living a lie and are torn between fleeing to be together freely and leaving the lives of future Alpha and Beta that they are destined to fill or staying and fighting for their love, their lives and their pack and the right for people to love whom ever they want to. I thought this was written really well and shows the struggles that same sex couples face. Although thankfully today death is not a repercussion but being outcast sadly can be. I absolutely loved this story and hope that you do to. For those unaware there are scenes of male and male intimacy which I loved and thought was written well but know it is not for everyone. However I loved it! Happy Reading! #2 THREE IS BEST - Previously titled - Mated to three. Bethany is a girl working in the local cafe and after she is attacked one night becomes aware of a whole new world around her containing shifters that she never knew even existed. Alex is her boss and a bear shifter and he knows he likes her but worries as she is a human, Reese is the Alpha of the Riser Woods pack and Draco is his Beta although is actually also a born Alpha both also like Bethany but worry about her being Human in their world. These three soon realise that not having her at all in their lives is something they cannot even think about and also realise that they do not only love her but are bonded together to keep their mate safe and loved for always. I really enjoyed this story how can you not ! And Bethany with her three sexy alpha males who are all about her is one very lucky girl! This story shows scenes of one woman with three men even at the same time there is no intimacy shared by the men together for those curious. I loved this book didn&#039;t want it to end and would of liked it to of been longer. Happy Reading! #3 TO SAVE HIS MATE - Previously titled - The Cure. I really enjoyed this story and I loved the idea of vampires and wolf shifters mating. I had wished this story was a longer but I was just really enjoying it. Sandra is a wolf shifter, a loner and unaware of Lucas a vampire who has been watching over her for the last year. Even though it is said that these two species do not get along and haven&#039;t for millenniums the chemistry between these two characters is undeniable. Once these two overcome their initial introduction which is thrust upon them by events. They realise they are meant to be together and that that can only happen if they stand together and fight against the evil that is desperate to keep them apart for their own gain. I really enjoyed the story and hope for more like this in the future. Happy Reading !

Awesome book as always. This author always gives great books. I&#039;ve never been disappointed. Can&#039;t wait for the next book.

I love paranormal romance. And here we have three short stories in one package for all tastes. I&#039;m not a fan of MM genre, so I can&#039;t say anything about &quot;For Our Love&quot;, but I enjoyed others two. &quot;Three Is Best&quot; is amazing menage story. One lucky girl gets claimed by three alpha shifters, after one night that changes her human life forever. And &quot;To Save His Mate&quot; is about having a little bit of every kind in paranormal world. But our main couple is shifters and vampire. Which supposed not to mix, since they were at war for years. But sometimes even between supposed enemies nothing can stop mating. Not to mention they have a bigger problem to defeat to gain peace. The Cure. Who are ready to sweep off everything and everyone who stands on theirs path to rule the world and have everyone at their mercy.

The Alpha Takes a Mate by Sam Crescent