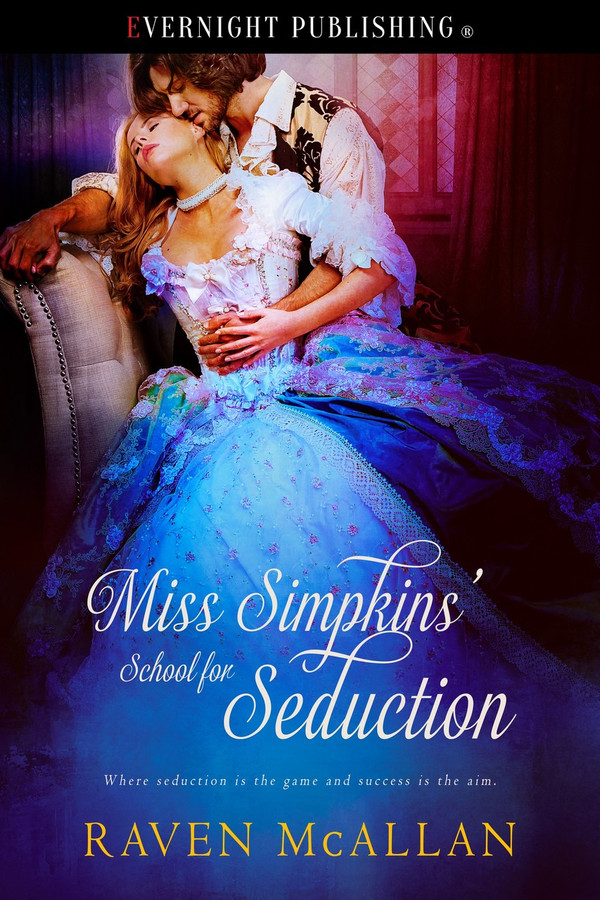 A school for seduction? Scandalous.

Husbands need to be shown that given the chance, their prim and proper wives can be more fun in the bedroom than any mistress. Therefore, who better to advise the young ladies of the ton about sexual satisfaction than Molly Simpkins, the ex-mistress of an Earl?

Molly’s methods are unorthodox, and would send the dowagers into fits of apoplexy if they knew what went on behind closed doors. However, compete discretion is assured.

Meet Flora, Lydia, Miranda, Jane and Molly herself as they introduce their partners to the sexual delights to be found in relationships that flout convention.

"I know I'm a good shot, but how am I with a knife? I expect we're about to find out." She left the room.

He shouted with laughter. Trust Miranda to make such an exit. But by goodness her last words made him sweat somewhat.

She was back within a few minutes and holding one of the sharpest knives he'd seen outside a kitchen in an age. He suspected it was the one the chef used to chop up meat every day. As the meat was always sliced to perfection, he had no doubt the implement was well honed.

Miranda crossed her eyes—a trick he envied—and struck a pose with the knife between her teeth and arms akimbo. Then she moved the knife and held it aloft before she executed a thrust and parry at some imaginary foe.

"So, my lord, are you ready to disrobe?"

How he wanted to retaliate. Tell her it was he who directed their actions not her. This reversal of roles intrigued him. Just this once. "It seems so, though it goes against the grain. I should be, and take heed will be, in charge in future. For now, at the risk of the knife slipping because what I'm about to say is, I accept, somewhat condescending, please be careful. I don't wish to lose the part of me that I want to use with you before I have the chance." He glanced toward his still hard cock. "If you get my meaning."

Her eyes widened and mischief showed in them before she shrugged. "Let's hope I don't spoil our chances then." She moved to the side of the bed and looked down at him. "Ah, there doesn't seem to be much room for maneuver there." Her face was a study in concentration as she put the tip of the knife to the edge of his pantaloons, and slipped it no more than an eighth of an inch under the material.

The metal was cold on his heated skin. Under any other circumstance, Felix reckoned his prick would have shriveled to the size of his thumb and tried to hide behind his balls. However, the look of concentration on her face and the way the tip of her tongue slid between her lips had the opposite effect. All he could do was stay as still as possible, and wait to discover what happened next. Felix hoped she didn't take the sheen of arousal on his skin as one of fear. He might not know what was about to occur, but in truth the anticipation was one of the most arousing feelings he'd ever had.

"I do hope this is equal to the task." Miranda lifted the sharp tip upward so it poked through the material. It was a relief to have it point away from him.

She began to slit the knitted cloth. Her knuckles grazed his cock. Thank the lord it was her hand, not her implement. Much to Felix's annoyance, he couldn't hide his indrawn breath, and Miranda raised her eyebrows.

She grinned. It was the look of a cheeky urchin and once again his body responded with a jump of awareness. "That, My Lord, is sensible. I've never done this before."

"In one sense I must say I'm relieved. In another, practice makes perfect and if this is your practice—" How could he say she was only going to practice on him? Wouldn't that make him sound stupid when not that long before he was adamant they could have no future together? Now he knew he had totally changed his mind, but he had yet to impart that news to Miranda.

"Yes?" Miranda prompted him and moved the knife deeper into the material it was cutting into.

"Oh, then I hope you're a fast learner," Felix improvised rapidly. "What happens next?"

The stitches began to unravel and ragged ends of cloth tickled his skin as the knife continued to cut. Gradually his cock was released from its coverings and once more stood up out of its nest of wiry hair. Drops of his essence glistened on its tip and slicked the sides of the head. The knife reached his balls and the metal stroked the warm skin as it worked above him.

Miranda stared and as he watched her face she blinked and swallowed. "Er, well, unless I spend the next hour slitting down each leg, this is as far as I can manage to release you. Will it do?"

She sounded worried. After a brief moment of wicked thoughts of what if, Felix chose to defuse her anxiety. "Of course. My cock is ready and waiting. You are naked. May I suggest you put the knife down now?”

"What? Oh lud, yes." Miranda sounded flustered, but she stretched over him—which put her breasts almost within biting reach of his mouth—and set the wicked-looking implement on the dresser. Afterward, she rested on her haunches and looked at him steadily, her eyes clear, and her skin flushed with a soft rosy hue.

Felix waited as she studied him. He wondered what the sight of him with his shirt scrunched up toward his armpits and his trousers slit from waist to crotch and gaping wide looked like to her. Then she gave a huge sigh. "I think I've fallen at the last fence, My Lord. What now?"

Ah, so she hasn't thought the how-to through. It was a relief to know Miranda was still as unskilled as he originally believed.

"You finish what you've started and fuck me?"

“Miss Simpkins School for Seduction” by Raven McAllan is a fun, quick, and steamy historical romance book with memorable characters. Molly Simpkins, now no longer a mistress, has decided to open a school for women to learn the art of seduction. In this way she hopes to help women find the pleasure they deserve, and buck the trend of a husband finding a mistress. The story includes five women who are determined to make the man of their dreams theirs and only theirs. Flora, Lydia, Miranda, Jane, and Molly herself will put their skills to the test for true love. “Miss Simpkins School for Seduction” is an enjoyable historical romance romp, and I enjoyed reading about more than one woman. It made the story seem more fleshed out, and like I’m reviewing multiple books instead of just one. Flora, Lydia, Miranda, Jane, Molly, and the men in their lives are well written characters who will capture readers’ attentions right away. I also like that Jane and Luke are not young lovers, and that Jane is not a debutante. This added some variety to the characters lives. Each pairing seems a perfect match, and the romance is steamy and hot. There are no real conflicts to the story, and each is more of a snapshot of a moment of one of the women’s lives. This is great in the sense that it keeps the pacing of the story quick and to the point, but I do wonder if some details are missing about the characters. Or maybe I just enjoyed them so much I want to know more. Author Raven McAllan makes sure everyone gets their happy ending in this sexy historical romance that is a perfect summer, fall, winter or spring read.

Deliciously naughty and utterly delightful. Raven&#039;s writing is witty, sexy, and a must-read for me.

Will You Dance, Miss Laurence? by Raven McAllan