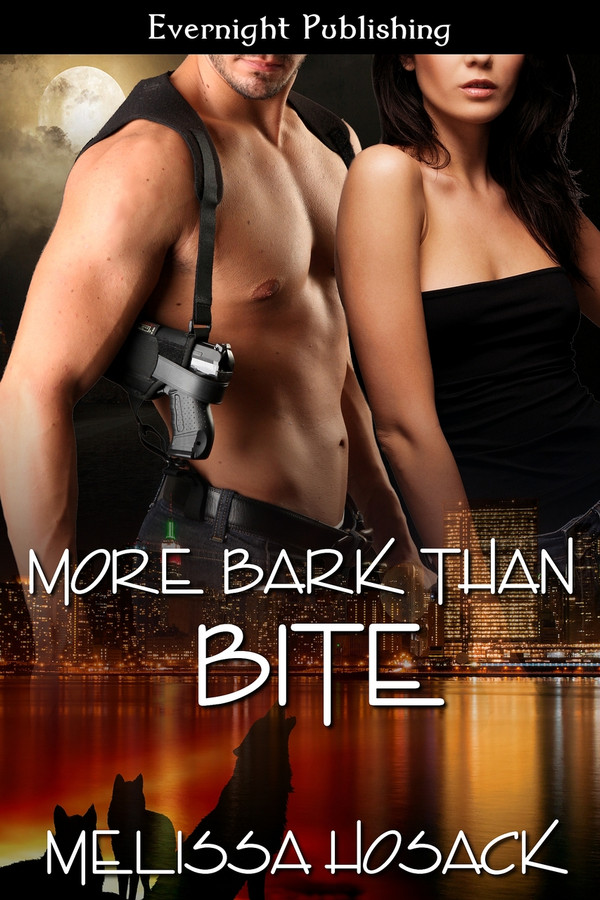 Reporter Morgan Phillips jumps on the opportunity to further her career when a killer plagues her city. Under the guise of needing assistance, she places herself along the predictable route of police officer Graham Audrick.

Knowing that Graham is attracted to her, Morgan attempts to charm information out of him. She gets in way over her head when her sly flirtation turns into a full out seduction by Graham. Not only is she now emotionally involved in the case, but she also discovers that the killer she'd desperately wanted information on is a werewolf bent on revenge against humanity.

This supernatural murderer also has an abnormal obsession with Graham. Now worried about simply staying alive another day, Morgan learns that Graham has a few secrets of his own that may be just as dark as the killer's.

The Trouble With Dating Cops…

Morgan wasn’t sure Graham would forgive the horrible thing she’d done. She’d betrayed his trust. She’d given away information that could help the murderer slip through the police’s grasp. Basically, she’d taken something that could turn into a beautiful relationship and flushed it down the toilet for fifteen minutes of fame. She felt like the crummiest person on the face of the planet.

She was so caught up in her own concerns that she jumped with a gasp when the back door to the station flew open and banged against the side of the building.

Graham stood in the doorway, his shoulders bunched in aggression. “How was I to know she’d spill to the press?” he snarled to someone just out of view.

The angered voice of the police chief came from the darkened hallway inside the building. “She is the press! You’ve jeopardized this entire investigation! I hope the sex was worth it, because you have totally screwed any secrecy we had about our operations. You’re lucky I only pulled you off this assignment. I should fire you!”

Morgan cringed at the heated words heaved in Graham’s face. This was her fault. Graham had been kicked off an assignment because of her big mouth.

Without a response, Graham stormed from the building, slamming the door behind him.

Morgan flinched, shrinking back against her car. When Graham started toward her in an angry stalk, she rushed out an apology. “Graham, I’m so sorry. I never meant to--”

“Get in the car,” he growled, his hand gripping her elbow roughly.

With a yelp, Morgan freed her arm and climbed into her car. She held her breath anxiously, waiting to see if he was going to join her or if he was simply going to send her away. She let her breath out slowly in relief when he climbed into the passenger seat. If he got in the car, that meant he was at least going to hear her out.

“Drive,” he instructed, his eyes dark and angry.

Morgan turned over the engine and shot him a weary look. The air was thick with an uncomfortable silence that she was too afraid to break.

Morgan Phillips is in a bind. Her story reporting about a tap dancing St Bernard didn’t go down well with her boss. She needs a big, meaty story and soon – but the only thing worth reporting is a series of grisly murders and no one is talking. Officer Graham Audrick had helped her out of a few scrapes, and frequents a small diner Morgan knew. The fact the police officer ais drop dead gorgeous only helped Morgan convince herself he’d be the perfect man to try and seduce a few juicy tidbits out of. Feeling guilty about taking advantage of such a sweet guy, and pleased to find he’s as attracted to her as she is him, Morgan lets Graham take her home. When one thing leads to another all too soon she learns she may have bitten off more than she can chew. This is a fast paced, exciting paranormal story. I really enjoyed the interaction between Graham and Morgan and was delighted to find Graham was far smarter than he’s initially portrayed. I loved how he played Morgan – even when she thought she was the one in charge and playing him – and I greatly enjoyed the twists he put on her, getting the upper hand even when she had no clue. I found it a little unrealistic that Morgan took so long to even guess that Graham might be a shape shifter. When he starts talking about scenting her, marking her and the fact she’s his mate – not to mention biting into her shoulder with “animalistic teeth” and saying he’s possessively marked her as his – and she still appears clueless. I wondered how on earth she could not have put things together quicker. I also found it a little unrealistic that she felt so guilty for weaseling a few hints about the case Graham’s working on. She’s a reporter. I felt the fact she wasn’t some hard-nosed, heartless bitch was great and refreshing, but it was difficult for me to imagine a reporter who feels guilty using a sexy outfit and a smile to get a story. I mean, how could someone like that actually make it in the real world? I have to admit though, I thought it really was good, though, that Morgan didn’t fit the regular mold of a “will do anything for a story”. In my eyes it made her a far more relatable heroine – just not particularly realistic. The chemistry between Graham and Morgan was explosive, and the sex well written and hot. I enjoyed the ruse Morgan had for Graham and found their coming together to be believable and exciting. I also was pleasantly surprised by a twist near the end, which I totally didn’t see coming. Any time a book surprises me with turns in the plot I find that’s wonderfully refreshing. If you’re looking for a story about a sexy werewolf cop and a rogue killer, this is a good book to try. I enjoyed the mystery, the paranormal side of the world was well built and interesting and while Morgan wasn’t always the sharpest knife in the drawer, she added to the plot and helped round the story out. I found this to be a good book that ticked a number of boxes for me and would happily read more set in this world and by the author. Recommended.

A killer is plaguing the city and Morgan is the reporter who is going to break the story. But she is going to need some inside information in the police force–-from Graham Audrick. Light flirting between them becomes pure seduction on Graham&#039;s part as the story heats up. That means two emotionally involved people are on the case of a werewolf bent on revenge. Now it’s a matter of survival for this couple. This is a short book--80 pages of twist and turns. Morgan is a feisty reporter trying to make a name for herself and Graham is trying to solve a case. A good combination that plays well off each other and makes for an interesting story. In the forefront we have a killer plaguing the city-–who happens to be a werewolf with an obsession for police officers. What makes this story a little different from other shifter books? This book has a good mix of action and suspense–-a romance and shifter mix. A different read for any shifter fans who are looking for something new in their reading mix.