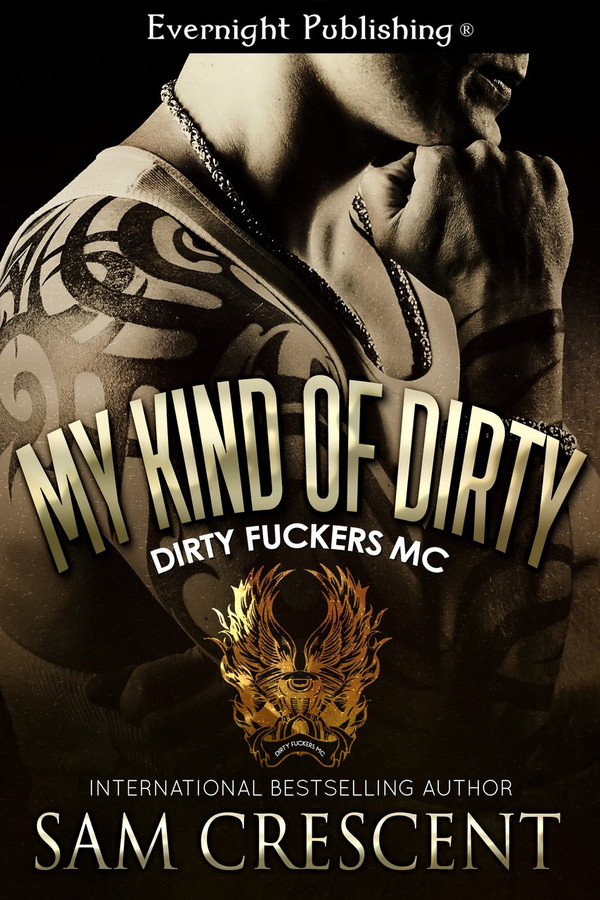 Grace has left behind an abusive ex and moved back to the town where she grew up, only to find it has been taken over by the Dirty Fuckers MC. But they’re not dangerous, and she even finds it enjoyable to work in the diner they own. However, one member is determined to become more than just a customer.

The last time Drake fell for a woman, he ended up with an STI, and being the laughingstock of the club. Grace is different. She’s not after his cock or looking to be part of the club. They start an unusual friendship, but neither can deny the attraction between them. Still, Grace’s fears, left over from her time with her ex, haunt her.

When Drake can’t take it anymore, he doesn’t give Grace the chance to deny him. The problem is one time is not going to be enough. He wants her by his side, as his old lady, and he’ll stop at nothing until he gets her. Will Grace finally admit her feelings, or will Drake be left out in the cold?

Drake sat down beside Grace as she had almost passed out on their running trail. It was seven at night, and the sun was setting.

“I feel like I’m going to throw up. Please tell me my ass looks a little smaller.” She rolled over, pushing her ass out.

He laughed, slapping her ass, and rubbing the sore spot.

“I’m too tired to hurt you back.” She rested her head against her arms, and he heard her breathing deeply. “Why did I want to do this?”

“I don’t know. You’re the one that was convinced your ass is huge. I could inspect.” He ran his hand over her ass, feeling her softness. His cock pressed against the front of his shorts, and he didn’t even try to hide it.

“Drake?” She released a moan, and he moved in close.

Grace turned her head to look at him.

“I’m seeing where there’s too much fat? I like this, baby. I can’t see where there’s any fat.” He gave her ass a squeeze, and she pressed her ass against his hand.

He moved his hand to the top of her thigh, moving up and down. She opened her thighs a little wider, and he couldn’t resist. He slipped his finger against her pussy, teasing her.

She gasped and lifted herself up, giving him better access to her pussy. Cupping her completely, he felt how wet she was.

Grace moved, turning, and her gaze was on his. Her cheeks flushed. In the distance they heard the rustling of the trees. Taking her hand, he placed it over his bulging cock. “That’s what you do to me, babe.”

“This will change us.”

“You’ve felt this change coming for some time now. You felt it long before the night of the party. This is how it’s supposed to be between us.” He cupped her cheek, sliding his fingers down to her neck, over her collarbone. The shorts were loose, and he pressed his thumb against her cunt, feeling the lips of her sex spread. She squeezed his cock, running her fingers up and down his shaft. “I’ve been wandering what it would be like to fuck you, Grace, to spread you out, and take you so fucking hard that you’re screaming my name.” Staring at her lips, he saw that she was biting her bottom lip. He wanted to bite that lip, to suck it between his teeth, and hear her moaning his name as she came from his fingers deep inside her. “Don’t fight it.”

Returning to her home town after leaving her abusive ex-boyfriend, Grace finds the little town has changed quite a bit including being taken over by an MC. The men of the MC mighty be tattooed, bad boys but they seem anything but dangerous and Grace finds herself enjoying working in the diner they own. Drake has it bad for Grace. But the last time he fell for a woman not only did it brings him grief but he was the butt end of jokes from the club for a long time. Grace isn’t like other women: she is sweet and kind and she isn’t looking for status or to hook a club member. Drake and Grace strike up an unusual friendship. Grace is gun shy after her ex humiliated her. No matter how attracted she might be to Drake, acting on it isn’t going to happen. Drake is fed up being friends with Grace. He’s more than ready to break down her walls and claim her body and her heart forever. Losing Grace isn’t an option and Drake will do whatever it takes to make her his old lady. With My Kind of Dirty, author Sam Crescent has created a somewhat easy going and relaxed but no less dangerous MC in the men of the Dirty F**ckers MC, if you can say that about an MC in the same breath. Of course the brothers of the DFMC are still tattooed, smoking hot and they have that don’t-mess-with-me attitude down with just the right amount of menace to keep the reader captivated. Fans of the Skulls and Trojans MC’s by Ms. Crescent are used to the illegal runs, death and danger stalking both MC’s looking to a annihilate and take over their towns and with the DFMC this isn’t the case. This story centers on the personal lives of the brothers of and MC, who are legit business men who don’t want nor do they go looking for trouble, but not to worry the drama, adventure and sensual heat is just as potent from fans of Ms. Crescent have come to expect from this always compelling author. Drake and Grace are an appealing and completely believable couple whose journey from friendship to a relationship is filled with drama, angst, tension and passion. Emotionally wounded Grace needs the time to heal and find the courage to believe in her and with Drake being patient, caring and kind with her helps Grace feel like a desirable and spirited woman and completely his. With the men of the MC there are a lot of secondary characters but Drake and Grace really seem to shine as the author creates a balance between the drama and emotion, building a deep bond between the reader and the couple. Of course, the seductive heat between Grace and Drake heats up the pages. Readers, who have never tried an MC romance for the fear of it being a little too intense or crude, really should give the Dirty F**ckers MC series a try. I would recommend reading the first book in this series, to really enjoy this story more.

This book hooked me from the start! I am really loving this new biker series from Sam Crescent. As the story begins we find out a bit more about Drake who regrets some of his wilder days. Now he&#039;s ready to settle down as soon as he meets the newest waitress in town. Grace had just moved back to her home town of Greater Falls after a bad experience with her abusive ex. She had lost trust in men but that was before she met Drake. It has to be said that I really loved Drake. Sam Crescent has a way of writing heroes that who are irresistibly sexy, but he was absolutely perfect. He realized that he would have to take it slow with Grace so he didn&#039;t push it. He was so sweet and patient with her, so they were so good together that they fell in love before they knew what hit them. It wasn&#039;t long before Grace was fantasizing about her hot biker and Drake was claiming her as his woman. He was so protective of her and totally different from the usual alpha biker that he grabbed my heart right away. Get ready for a treat because this series is unique from any other MC romance. It&#039;s really a blend of bad boy bikers and a BDSM club scene. It has interesting couples and side stories that I can&#039;t wait to read about. I&#039;m really hoping for something with Chloe and Richard soon, but of course Pixie and Suzy would be just as great. Just more will do for this satisfied reader.

Sam Crescent just keeps writing amazing books! She has added another winner with My Kind of Dirty. Can&#039;t wait for the next one!

Loved Drake...the sexy wild beast.lol loved how kind, sweet, patience, caring, thoughtful he was with Grace. She needed his kindness, to feel like a woman. And drake was perfect. Loved this story

I love this author the story is heart warming and full of adventures it is a keeper and good to read again and again....

I loved this book! It combined the raw, gritty characters you&#039;ve come to expect and love from an MC but it also shows a deeper, softer side that I wasn&#039;t expecting. Love this series!

ARC received from author in exchange for an honest review I think between James and Drake, Drake is my favorite I know he&#039;s suppose to be a hard core biker but to me he was so sweet with Grace. I loved it Everything about this story was good. From the moment they met to the end. He didn&#039;t pressure her, he wasn&#039;t overbearing he was just there. Another awesome story Sam and time well spent reading and will definitely be reading this again! :-) I think I want to read Pixie and Suzy next please!! :-)

Another great ride in the series. I absolutely adore Drake. From the first moment he got my support, my attention and piece of my heart. You need for sure to meet him. This story was so amazing, that I want to reread the first book and I need the next book like yesterday. So much hints about future couples. I&#039;m dying from curiosity.