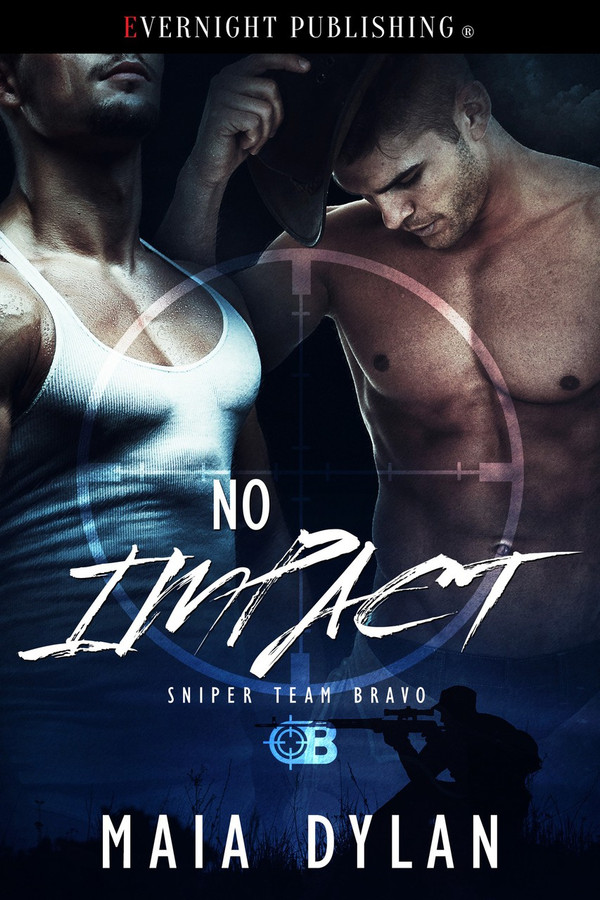 No impact on the target is the call that a sniper has missed, that their position is now compromised, and the firestorm it can bring could ultimately cost them their lives.

Riley Marksmen has wanted Marcel Cross from the moment they first met. He just had to convince Marcel that he wanted Riley just as bad. When his first attempt with Marcel results in no impact, he is convinced that a future with Marcel is worth the risk of trying again.

Marcel knows there is something between him and Riley. He just has to find the courage to take the gamble in the first place. When secrets are discovered, and a threat is revealed, it jeopardizes what they’ve only just started to build.

Can they find a way to the future they’ve targeted, or will their risk leave No Impact?

“So, this is where you’ve been hiding.”

Marcel looked up at the sound of the voice, and his gaze locked with Riley’s, who was leaning on the door jamb of the room Marcel had turned into a makeshift office. It had been four days since the incident with the I-beam, and Marcel hadn’t realized how much he’d missed simply looking at Riley. The cowboy construction worker was dressed in a tight white t-shirt, jeans covered with construction dust, a well-worn pair of steel cap work boots, and the ever-present black Stetson.

Marcel sat back in the kitchen chair he’d snagged to work in and crossed his arms over his chest. “Saying that I was hiding would imply that I either A, had a reason to hide, which could imply guilt of some description. Or B, there was something or someone I was avoiding and was indeed seeking a place in which to hide. Now, as I am neither guilty of anything, nor am I avoiding anyone in particular, then I can assure you that I have not been hiding.”

Riley pushed off the doorjamb with a grin and walked into the room. “Then I guess I was wrong.” Marcel quirked an eyebrow and sent the man a pointed look, making Riley wince sheepishly. “Yeah, okay, not the first time I said the wrong thing to you. And that was what I wanted to come and talk to you about. And to apologize for.”

Marcel grinned back and leaned forward in his chair, placing his elbows on the desk in front of him. “Really? Well, in that case, please go right ahead. I am, as they say, all ears?”

Riley moved closer to the opposite side of the desk and placed both fists on the surface, leaning forward. “That’s good, because I wouldn’t want to have to do this twice. When you came onto the site the other day, I should have called you back and explained that the site was now locked down. I failed in my duty as foreman to do that, because, well, to be perfectly honest, I was too busy looking at your ass and imagining it bare for my viewing pleasure as you walked away from me to think about what you weren’t wearing on the top half of your body.”

Marcel blinked slowly as shock filled his system. He had known that Riley was attracted to him. He wasn’t blind to the way the man watched him, and Marcel sure as hell wasn’t immune to Riley either. But this was the first time either of them had actually spoken about that attraction out loud.

“When Dale called out that there was movement in the chain holding the ridge I-beam and I looked up, I knew it was coming down. From my vantage point, I could see that it was going to land on you. I dropped what I was carrying and sprinted for you. I was so fucking scared that I wasn’t going to get there in time. Then, when I tackled you, if you had resisted at all both of us could have ended up seriously injured, but instead you rolled with me, which I am extremely grateful for.”

Marcel shrugged. “That’s what we’re trained to do.”

“Yeah, and that leads me into the apology portion of my visit today.” Riley leaned in slightly. “I am really sorry for what I said to you. I never meant to imply that you were an idiot and that shit about you lacking reflexes was a total pile of bullshit. All I can say is that I was acting out of fear, and if I had been thinking I would have caught myself before I shoved my foot so far down my throat I could kick my own ass.”

Marcel huffed a laugh. “You certainly have a way with words.”

Riley sent him a cocky grin that had excitement fluttering in Marcel’s belly. “Wait until I’m convincing you to go to bed with me, then you’ll get a real good understanding of just how good I can be with words.”

No Impact was a enjoyable read, very entertaining a great addition to Sniper Team Bravo series.

Marcel had been a Marine sniper and a man with no family, no partner and only a small number of friends. After mustering out though, he meets Riley, who runs a crew of construction workers. The two men are immediately drawn to one another. But can they manage to find some common ground? I really enjoyed this story. Equal parts Army/Marine story and M/M romance I felt this book really checked quite a few boxes for me. I found the pacing really good, it moved along at a good clip – neither too fast nor too slow. And the chemistry between Marcel and Riley steamed practically off the pages – I was hooked right from the first few paragraphs. Both Riley and Marcel are strong men – emotionally and physically, I enjoyed reading about how they each gave no quarter, sharing their bodies and hearts with strength and vigor. Reading about these two alpha men, and watching them not only fall in love with each other but also open themselves, share their vulnerabilities and hearts was really special. I totally commend the author on managing to balance the two characters so well, allowing them each to be strong and fierce, without being over-bearing or too dominating for each other. This was an excellent part of the book and something I genuinely loved to read. Readers will also likely be pleased that there is a strong cast of secondary characters. I feel this will certainly leave options open for the author to write many more books. While this book is part of a series it’s the first I’ve read and I didn’t feel at all lost during it – it genuinely stands fine alone and can be read with no prior knowledge. I enjoyed reading the other characters almost as much as I liked Riley and Marcel, and would absolutely happily pick up any other books in this series by the author. A sexy, fun and wonderful read full of interesting plot, strong men and great characters.

Marcel Cross was a sniper for the United States Marine Corps, along with his friends they made up Sniper Team Bravo. Although they were the best at what they did they were taken by surprise at times but when they had an RPG launched directly at them they realised it was time to retire. Their leader Devon Roberts had inherited his grandmother’s estate so they decided they would all join forces and start their own business Cottonwood Training Facility, hopefully with time it’ll become one the country’s leading tactical training facilities. When Marcel first met Riley Marksman several months ago when he arrived to design and build the training facility it was lust at first sight on both sides. When Riley makes a huge mistake by insulting not only Marcel himself but his reflexes which just happen to be razor sharp! Marcel decides he’s wasting his time waiting for an ass like Riley and makes the decision to go out and get laid at the first opportunity, everything would be just fine except for the fact that even the thought of finding just any man to have sex with leaves cold for the first time in his life. Riley is so frustrated with himself, he can’t believe he said that to Marcel! Not only does he have to find out who is sabotaging his jobsite but now he has to get Marcel to listen to him while he grovels. It takes a while but Riley gets Marcel to agree to give them a go. Whilst his relationship is going according to plan the sabotage is only getting worse. The further behind they get due to sabotage the more suspicious Riley gets about who could possibly want his job to fail and his men to get hurt. As Marcel and Riley get closer one of Marcels teammates packs his bags and disappears. When they go to find out if his ‘partner’ knows anything about it they find that he has been abused and the man who did it is still in bed with him. The man is one of Riley’s workers and when he discovers what he’s done there is hell to pay. Although they rally around their teammate and try to talk some sense into him they can’t find their other teammate, he’s gone MIA. When Riley finally tells Marcel about his childhood and how his father killed his mother when he was 8 and then he tried to kill him when the police came to get him. The only bad thing about that is that now he’s out of prison Riley has no idea where he is. Through investigating, Riley discovers that his father had another family and he has a half-brother. It takes quite a bit of searching and investigating but they do find out who is trying to sabotaging their plans. I would recommend that you read these books in order so that you can follow the story, they’re e not stand alone stories.

Riley is a former sniper and he has his scope on the sexy Marcel but secrets may just cost them their lives. ​ Talk about starting a book off with a bang, in this case it’s the bang of an rpg. Riley and Marcel have great chemistry. I love that they don’t start off all gooey eyed at each other but literally yelling. Their romance is really spread out over the book and extremely satisfying. The mystery plot is just as good. I like the action and the balance is great. Romantic suspense is a tough genre to get right and I think this author did a fabulous job. No Impact is an intense read and I look forward to more in this series

Oh, where to start!! I&#039;ll just say that I totally loved this book. In fact, I think I like it better than the first one in this series. Marcel is a member of Sniper Team Bravo and meets Riley when his company is hired to do construction work at the teams home. The attraction is instant but Marcel tries to ignore it. It takes time but the two finally get together and it&#039;s just a beautiful thing. Someone is sabotaging the construction site though and when Riley gets hurt, Marcel gets very worried. Secrets and a twist that stunned me, puts their relationship on the rocks. Will they be able to find out who is trying to keep them apart? When Riley is abducted, will Marcel and his men be able to save him? If I could have given this more stars, I would have!! It&#039;s just that good!!! Just a word of warning though, this is a MM book so if you aren&#039;t into men in love, you should probably just skip this.