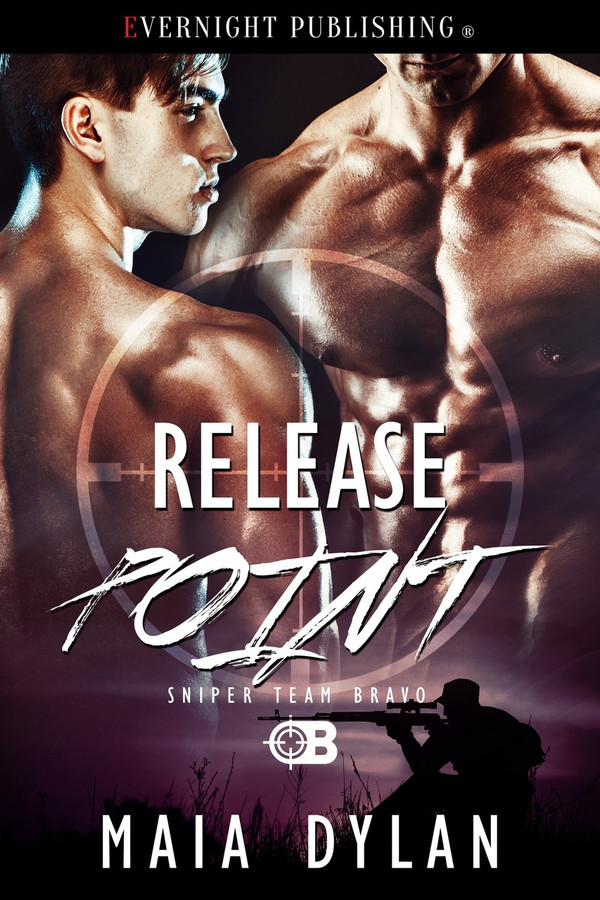 Snipers refer to a point where a decision made could change the course of a target's journey, as the release point.  When Maddox Devereaux walked away from Glenn Webster six months ago, he’d reached that point and the path he chose meant he could never go back.

Maddox headed into combat and eventually found himself being held captive and tortured in South America by the head of a drug cartel hell bent on revenge. For Maddox, he felt as if that might just be his penance.

Glenn was tired of his team thinking that he was broken.  Yes he had been raped, yes it had been horrible, but he had found a way to deal with that. What he was finding hard to process was how he had pushed Maddox away right when he needed him most.

When they find out that Maddox is being held captive, Bravo do what they do best.  They load up and go to war.  Maddox comes home and it takes all of them to help him heal. Little do they know, they are now the ones being hunted.

Can Glenn and Maddox find their way back together, or will this release point result in an outcome neither of them will survive?

On the floor just inside the door, a man lay dead, a nasty looking knife wound at his temple. When Glenn’s gaze moved to the back of the room, he saw two men fully engaged in a knife battle. Both were bleeding heavily, but fighting with a confidence that spoke of hours of training. But only one of them was a man Glenn knew better than himself.

Glenn lifted his gun to put a bullet in the Hispanic man who was swinging his knife toward his spotter, but stopped when Maddox threw him a quick glance that gave Glenn pause. For whatever reason, Maddox needed to do this. Glenn cursed when Maddox moved with his opponent, putting his back toward Glenn. There were large strips of skin missing from his back, and huge, bleeding red welts. Add to that the knife wound Glenn had spotted on Maddox’s upper chest and the huge gash that marred his stomach, and he had no clue how he hell the man was still standing.

As he watched, Maddox’s opponent faked right in a move so obvious Glenn knew it was over. A split second later, Maddox cried out in triumph as he drove his knife to the hilt into the top of the other man’s skull. He was dead before he hit the ground. Maddox turned, swaying on his feet, his breathing heavy and fast.

The two of them stood in that hellhole, the smell of blood, and death thick in the air, and simply stared at each other. Maddox’s expression was one Glenn had never seen before. He had witnessed Maddox dispatch their enemies without any hesitation, doing what had to be done, but there was always a flicker of pain at having to take another man’s life. Especially in war when both were simply following the orders of others. In this moment, there was no remorse. No pain. No emotion whatsoever. It was as if Maddox had checked out.

Glenn stepped forward cautiously. “Maddox?” An ache appeared in the center of his chest when Maddox flinched.

“Am I dead?” Maddox asked in a stilted voice.

“Are you sure?” Maddox’s voice was slurred.

“Yeah, brother,” Marcel said from his position by the door. “You are definitely still standing, but we have no idea how the fuck you’re doing it.”

“Stubborn ass willpower would be my guess,” Dev growled as he strode forward, stepping past Glenn and approaching Maddox. Dev stopped immediately when Maddox shied away. “Maddox?”

Maddox shook his head. “No. Not Bravo. No absolution for me. I … failed–”

This was a fast-paced story about two guys who were partners (sniper/spotter) on a team of ex-military mercenaries. Previously, Maddox walked in on Glenn in bed with another man, but all wasn’t what it seemed. Unfortunately, Maddox jumped to the wrong conclusions which forced Glenn to push Maddox away. He then went to work for another mercenary operation where he ended up being captured, along with other members of his new team. Never giving up on one of their own, his original team goes in to help perform a rescue/retrieval. Through the mission, we learn what happened to push Maddox away. We also get to see a bit of Maddox in captivity before Team Bravo sweeps in for the rescue. Once back at home, Glenn doesn’t leave Maddox’ side during his recovery, insisting on remaining by his side. They eventually hash out the past and are able to move on. This was a quick read, and though I didn’t read the previous stories, I easily got to know the players and what was what. There were times, however, that I wondered if it may have been better to read them in case Maddox and Glenn were present, as it seemed as though there were some details lacking here and there, as we didn’t get a very good opportunity to really feel the emotion behind their relationship. It was an exciting story though, and I am definitely looking forward to going back and reading about the other characters on the team and will be on the lookout for the next installment as well.

Maddox and Glenn book. Was a great read. A great addition to Sniper Team Bravo

This series has become one of my favorite MM series. Maia Dylan just makes it all come alive. Glenn and Maddox were part of Sniper Team Bravo and were a couple but demons from Maddox&#039;s past caused him to walk away from Glenn. Big mistake!! When Maddox is captured by enemies, Bravo team comes to his rescue but it&#039;s up to Maddox to earn their trust again, especially Glenn&#039;s. This is a story of coming to terms with your past and reaching for the future. I love how Maia weaves her story and makes the readers feel the strong emotions. There were times I wanted to just reach in and smack Maddox but once you understand his past, you can see why he did what he did. This is a wonderful addition to the series and it looks like we&#039;re going to get a spin off series with Pathfinders!! YAY!!!!