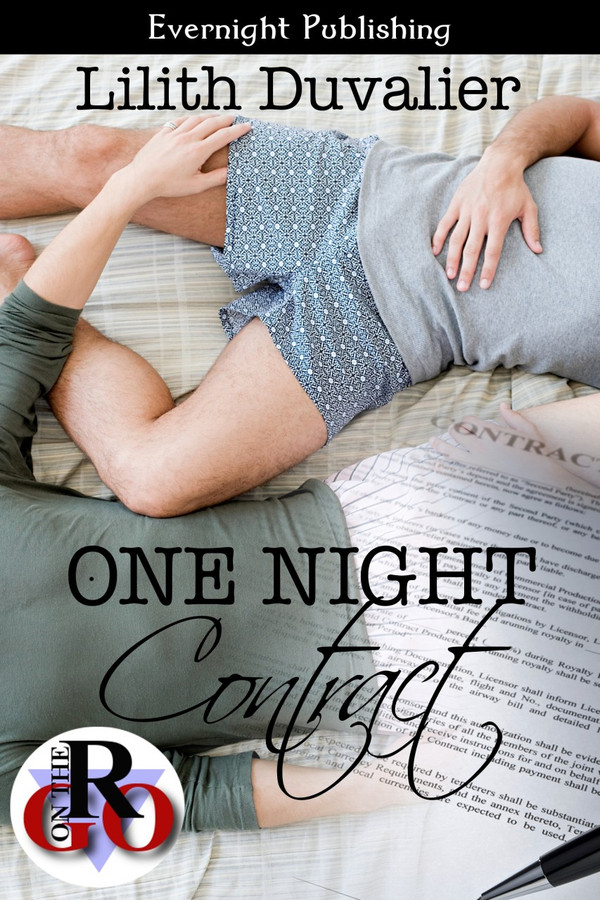 After a long night of feeling like they will never be as happy or as successful as their friends are, Jaden and Rye find themselves desperate for affection, saturated with tequila, and on the verge of a decision that could ruin their solid if strange friendship.

Broad, boyish (and only mostly straight) Rye offers a compromise: a one night contract. As soon as they both leave the bed, the night never happened.

But you can’t rewrite the past. And you can’t ignore your heart.

Jaden pulled out his makeup remover from the medicine cabinet and a cotton ball from his well organized little shelves under the sink. He tried to ignore Rye’s piles of crap on the other side. He poured a little liquid onto a cotton ball and started to gently remove his eye makeup.

He didn’t want to be overdramatic or anything, but he was pretty sure he was going to die alone. The Grady thing may have been a stupid crush. He probably wouldn’t have even asked him out in the end, but it still hurt to know that if he had asked Grady out, he would have been rejected for exactly the same reason the last four guys had rejected him.

Because they weren’t into femmy guys. They didn’t want to date anyone who was “too gay”. They wanted a “real man”. And this desire seemed to have nothing to do with the niche that they themselves occupied on the butch to girly scale. It was like high school all over again sometimes, but instead of the big bully jocks being the reason he had to hide his light under a bushel, now it was his fellow urban gays who were telling him to clean up, stop moving your hands, lower your voice, and don’t embarrass us anymore.

He wished someone had warned him back in college that the real world was just high school but earlier in the morning.

He went back to his room and collapsed into his bed, ready to really get his mope on. There was a light tap at the door.

Jaden huffed. For a guy who was built to knock in doors, Rye was weirdly shy about knocking on doors. “Come in!”

Rye stood in the doorway in the loose-fitting jersey shorts he slept in and an even rattier t-shirt than the one he’d attempted to wear to the party. He held up a water glass. “Brought you this.”

“Thank you,” Jaden replied. He was weirdly touched by Rye’s silly gesture.

Rye shrugged and walked over to Jaden’s bed. Unlike Rye’s room you could actually walk across the floor of Jaden’s room without fear of injury. Or tetanus.

He handed Jaden the glass and slid over until he was sitting across from him, one leg folded under him and one leg hanging off the edge of the bed.

Jaden sucked down the cool water. He’d needed it more than he’d thought he did. He had stopped drinking about an hour earlier than Rye, but his mouth was sticky with a sour after-alcohol taste and his throat was dry.

“So…” Rye started. “I feel like I pissed you off earlier today.”

“You are really touchy feely for a straight guy.” Jaden sighed. “Or mostly straight with slight deviations, anyway.”

Rye rolled his eyes at him. He took the glass back from Jaden and drank deeply from it. “Still.”

Jaden didn’t answer. Rye tipped back the last of it and then pushed himself up onto his knees and moved forward to set the water glass on Jaden’s nightstand. There was a slight pause where they both realized that he was leaning almost entirely over Jaden’s body, hanging just a couple inches above him in thin pajamas. He cleared his throat and settled back into his previous position before chuckling and flopping backwards down onto the bed.

Jaden scooted a little ways away from his headboard, second guessed himself for a moment, but then dropped down onto this back as well. Not next to Rye, a totally respectable distance away, but still closer than they would have ever been if they were sober.

Jaden felt the mattress dip beside him. He was still feeling somewhat drunk, but mostly he felt warm and sluggish. It took him a moment to realize that the mattress was moving because Rye was scooting closer. Crossing the line between oddly close and easily-excused-by-tequila close, then moving all the way to there-could-be-consequences close.

“You don’t have to lie to me,” Jaden said, more snidely than he had meant to. “It’s not like I’m ashamed. I wear makeup. I like nice clothes. I genuinely love show tunes and I’m not going to pretend to “head bang” to mediocre guitarists who can barely sing or listen to “bitches and hos” crap from misogynist jerks who can’t even play an instrument.”

Rye snorted. “You’re awesome. And somebody that’s not a jerk will see that.” He rolled onto his side and propped his head up on his elbow.

Now they were definitely too close.

“I’m in the same boat if it helps,” he said, sticking out his bright pink tongue in an expression of juvenile distaste. “This beautiful girl was definitely vibing on me at the party until she found out I was lugging skis and rock climbing shoes around for minimum wage. She was gone so fast it was like she evaporated. I swear there was a clap from the air knocking back together. Like with thunder.”

“Yeah, but low-class is gone in a couple paychecks. My mom has pictures of me fucking garlanded in all the Pretty Pretty Princess Jewelry with my sisters when I was three.”

Rye snorted again and dropped his face down to cover the laugh. This time they were so close that his face pressed down into Jaden’s bare arm.

Rye’s weight had caused Jaden to slowly drift toward him as he slid down into the dip that Rye’s body was creating in his mattress. They were lying side by side now.

Rye smelled good. Like boy and soap and wood smoke and just a little like the surf texture sculpting cream Jaden had convinced Rye to start using on his hair a couple months ago.

And he was warm.

And he was here.

Once upon a drunken night, two friends embark upon a road that they will never be able to return from. Will they remain friends after tonight or will they be forced to go their separate ways? Love it or hate it please take note of the author’s name as I have no doubt that we will be hearing much more from her. This review falls somewhere in the middle. I loved the characters, there was a lot of detail and depth put into them despite the shortness of the story. The dialogue between the characters was entertaining. The sex scenes were pretty hot too. I didn’t like that there was unprotected sex especially with all the talk in the book about previous booty calls. It takes away from the story when an author does this as all I can think is STD, a general reference is an absolute must. There is also, and it might possible just be my copy, major editing issues. Though there are some big things that lower the rating on this story, it bares mentioning that I will personally be keeping an eye out for more from this author.