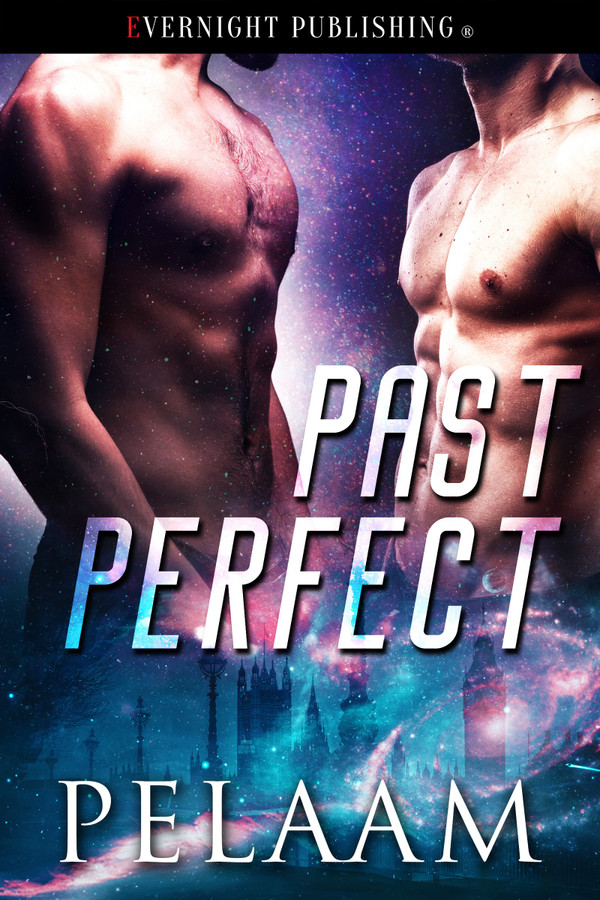 Ailill O’Brien was only expecting a holiday. Things started oddly when his booking for Australia became one for New Zealand.

When coincidence leads him past a pub, he sees a man he remembers from a year ago, and half a world away. Experiencing one of his strange fugues, his world is suddenly turned upside down, and nothing will ever be the same.

Faer sees a young man he’d never forgotten come into a bar as he relaxes in between missions.

When he realizes that Ailill’s past is being targeted, to wipe him out of existence, he has no choice but to act.

Across time, Faer and his friends must battle dangerous enemies to protect Ailill’s ancestors and make the past perfect.

But when Ailill learns the truth about Faer, will their still-burgeoning love be strong enough, or shatter apart at the revelation?

“What made you come here? The mountain?” Faer waved a hand as if Mount Taranaki was about to sit and join them.

“Yeah. I thought it’d be nice to just chill for a couple of days.”

“Where you met me. After a year. And you remember me.” Faer shook his head.

Instead of getting angry, Faer’s smile broadened. “I’m glad. So were you.”

The next hour passed in a whirl of enjoyable chatter. Ailill’s initial nerves evaporated, it was as if he and Faer were old friends. Faer was particularly interested in Ailill’s stories of his great grandmother and his trips to Ireland.

“I have been there. But it was a long time ago.” Faer shrugged when pressed by Ailill.

There was something about Faer’s smile, as if he’d shared a private joke that Ailill just didn’t get.

“I was thinking of going up the mountain tomorrow, or out to Oakura to the beach. If you’re free, maybe we could hook up? I’m not going to be here that long. It’d be nice to get together again.”

“Yes. It would.” Faer seemed hesitant, as though torn, and Ailill decided he’d probably gone far enough and stuck out his hand. “I’m in the backpackers’ up the road. Or I could give you my cell number.”

Whatever Faer had gone to say was lost as the worst sensation of falling that hit Ailill hard. But worse than that was the visions that came with it—faceless creatures reaching out for him with black, claw-like talons, dead and mutilated women, his own great-grandmother staring at him blindly because her eyes were missing, a pyramidal tomb, a tall, narrow building, and something … else. Something Ailill couldn’t describe, except for the feeling of evil it emanated.

“Ailill? Ailill, can you hear me?” There was a panicked tone to Faer’s voice, and Ailill clutched tighter to the hand he held, trying to use both it and Faer’s voice to get out of the void.

“Sorry. Fuck. I don’t know what to call it. Just felt really dizzy for a second.”

“That wasn’t a second.” Faer squeezed his hand. “Can you open your eyes and look at me?”

“Yeah. Sure.” Ailill did, cautiously, just in case the sensation returned. “I’m fine. Hey. Where did my phone go?”

“It vanished, at the same time your drink did.” If it wasn’t for the suddenly serious expression on the other man’s face, Ailill would have thought it all a joke.

“I don’t understand. Those terrible visions. Death and blood. And something—something I can’t even put into words.” Ailill shuddered.

“I think we need to go. Quickly.” Faer stood up, and Ailill shook his head.

“Go where? I need to report my phone as missing.”

“It’s missing because it wasn’t in your hand as we touched. You don’t exist anymore. We must find out why. Your meeting me here wasn’t accidental. But we have to move fast before it realizes you haven’t been wiped from existence.”

“What the fuck are you talking about? I don’t know what your game is, but if you don’t give me my phone back, I’ll get the staff to call the cops.” A growing sense of fear wrapped around Ailill’s heart and squeezed tightly.

“They won’t see you. You don’t exist here. Try it.” Faer indicated the table next to them, and while a man stared at Faer, he gave no indication he saw Ailill.

“Excuse me, mate. Did you see my … friend … here hide my phone?” Ailill addressed the man who didn’t react. “Are you deaf?” Ailill raised his voice. “I’m right here.” When Ailill tried to touch him, his hand passed through the man’s shoulder and then the man shivered.

Ailill went cold. There was a buzzing in his ears, and he was convinced he was about to faint. Dizziness swept through him and for a second, the world around him flickered to the void and then back again as Faer touched him.

“Don’t do that again. It only emphasizes your fragile position in time and will bring things we do not want to have to deal with directly to you.” Faer turned Ailill around and pushed him toward a door.

“Where are we going?” Ailill asked, although the way his teeth chattered, he wasn’t sure Faer would understand him.

“In the first instance? Up to the clock tower here. That way we can jaunt away safely. Thankfully, it’s just up the road. Just a couple of minutes away. Hurry.”

Once outside the bar, Faer walked briskly, leading Ailill along the road and turned right to go up the hill to the clock tower. Although the sky was cloudless, thunder rumbled ominously close.

“They know. Hurry, Ailill.” Faer increased his speed until he was almost jogging up the hill with Ailill panting to keep pace.

“Faer, look!” Ailill glanced back and stopped dead. A man dressed in grey stood behind them, although Ailill knew they’d passed no one. He seemed to be looking directly toward them, only it was not a man.

Where the creature’s face should be was … blurred. There was no other way for Ailill to describe it. It was as if an artist, unhappy with the details they’d created, had simply wiped off the wet paint, leaving a smear in place of features.

“Don’t look at it. Just hurry.” Faer pulled Ailill behind him as Ailill’s legs grew heavy, making it difficult for him to run.

“No. A scout. Don’t waste breath.” Faer shoved Ailill up the steps of the clock tower.

“It won’t be open.” Ailill panted heavily as he fought to keep his legs moving.

The strange thing was … Ailill did. Even though he’d only met Faer once before and exchanged no more than a half a dozen words at that time.

When Ailill was close to Faer, he felt a sense of calm, of belonging. Part of him still wondered if he was having a bad psychedelic trip. At the back of his mind an elusive memory fought to surface, but there was no time to try and focus on it.

At the top of the stairs was a locked door. Ailill looked over his shoulder. “I said there was no—” The rest of his sentence was never uttered as he pointed down the main street.

Close to the faceless man, the air vibrated, and a black-scaled claw slashed its way into existence. Ailill gasped as if the claw had physically scraped down his chest.

“Outsider. Breaking through. Hold tight. We have to space jaunt.” Faer grabbed Ailill around the waist. “Face me and hold tight.”

Ailill didn’t argue. He wrapped his arms tight around Faer’s neck, their faces so close that if Ailill moved just a fraction, he could kiss the full lips so tantalizingly close. Then Faer somehow walked through the solid door and the bottom fell out of Ailill’s world.

I love paranormal stuff and this book has TONS of paranormal in it. It’s also a mystery. As a fae, named Faer, seeks to help find Ailill why his existence has disappeared and through which family line he’s been banished from. Ailill is not a happy camper. He’s vacation plans have been changed somehow and he still has yet to figure out how. On top of the fact, Ailill has been experiencing the feeling of falling off and on and it leaves him disoriented. But it wasn’t until he sees a familiar face from another place, that his life takes on a whole new ‘existence’. On Earth, he doesn’t exist at all. And Faer has to help him find out quickly why he’s suddenly disappeared and from where it’s all started. With the help of gods and goddesses and other time travellers, they have to find the evil lurking about and find out if it could have even been someone disguised or actually Jack the Ripper who could be one of the beings doing his family line in. Ailill is terrified of what he will find and is completely thrown as his ‘life’ is torn apart bit by bit. But the things they find on this journey help Ailill know more of his family and help others know how gifted his family is. Now if they can stop the evil in time, maybe Ailill will be saved. But there are other secrets that are about to come out and will Ailill be able to cope with it as well as everything else or will this be what puts him over the edge? Imagine sitting, talking to someone in a pub and all of a sudden you no longer exist. And the only reason the person you are talking to can see you, is because they aren’t human. I think I’d be a little freaked, yeah. And then thrown into other worlds you thought were just fairy tail stories someone made up….yeah, freaked even more. But as Ailill starts to adjust, he knows within every inch of himself that he can trust Faer. That it feels right. He has no idea why, he just feels it instinctively. But Faer is hiding who he is for fear of what Ailill will do, because his reactions so far are not so great. I mean, who could blame him. But still. But it’s a fun story because not only are they time traveling to places, like Jack the Ripper’s time, but to others as well. Where they meet gods and others that just blow your mind. All while trying to solve the mystery. It’s a fun story, with lots of twists and turns. And I think you all should try it and see what you think.