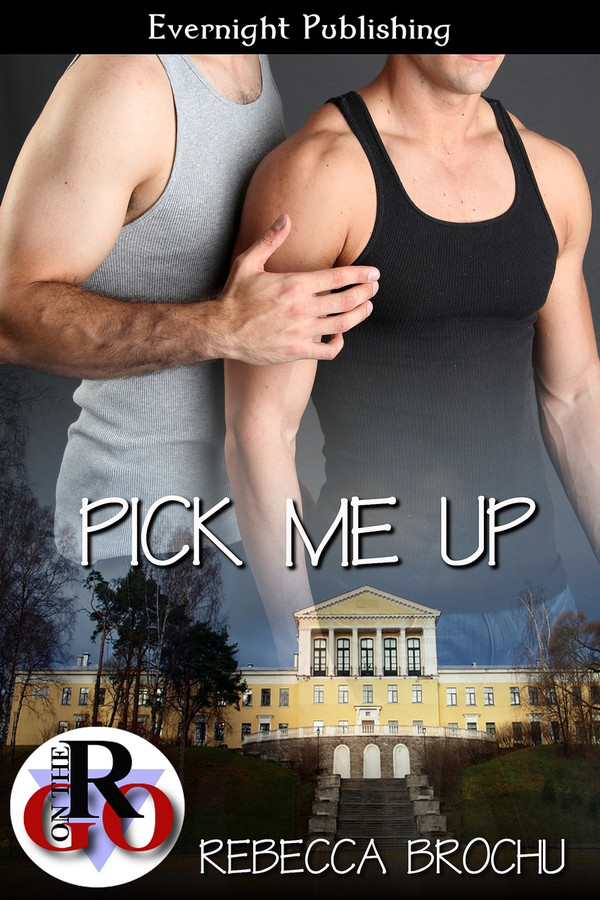 Bryce Huttner wasn’t looking for a one-night stand or a backroom fling when he agreed to go out with Jamie and Maddy, two of his closest friends, to the local club.  But, when he encountered a charming stranger on the dance floor, the man was almost enough to make him change his mind.  That was until the encounter was cut depressingly short.

When they eventually met again, Bryce was surprised to see that Felix’s interest in him had not wavered at all.  Felix seemed determined to win him over and had a never ending supply of horrible pick-up lines at his disposal.

Bryce quickly found himself torn between holding strong and giving into the desire to let Felix pick him up for real.

“If I kissed you, would you punch me?” Felix asked. He looked down at Bryce where they stood outside his front door.

The porch light Bryce had turned on before he left shined down on them.

“Maybe,” Bryce said. He wasn’t serious, but was somehow unable to keep from teasing Felix. Low heat curled in his stomach, anticipation running high through his veins.

“Cold and cruel. Not sure if I want to risk it when I know how vicious you can be,” Felix said. He swooped down and did it anyway.

Felix’s mouth was soft against Bryce’s, his lips thin but soft. When Bryce opened his mouth for the welcomed thrust of Felix’s tongue, he tasted faint traces of chocolate and coffee. The kiss went hot, but stayed sweet with Felix in control, his mouth a hair shy of too gentle as he tangled his fingers in Bryce’s hair. Felix tilted his head and changed the angle of the kiss, made it deeper, hotter, a shade or two rougher, and Bryce groaned into it.

Bryce finally pulled back far enough to look up into Felix’s eyes. He stared at him, searched his gaze for a moment, and then had to admit he’d already made his decision. He’d made it as soon as Felix asked him out.

“Come inside with me?” he asked softly.

Felix’s eyes went wide then narrowed slightly. “You sure, Bryce? Because I don’t want this to be a one-time thing, I don’t want casual sex with you. If we do this, then I want us to do it right.” Felix’s face was serious, gaze sharp and attention focused.

That same warmth curl worked its way through Bryce’s chest, all because Felix wanted what he wanted. It was glorious.

“Oh yeah, I’m sure. We want the same thing, and we’ve known each other for months now. I’m tired of not admitting what I want, tired of not having you when it’s all I think about,” Bryce said, his voice low and steady, his gaze direct. He wasn’t ashamed of what he wanted, not now, not ever.

“So, I guess it’s safe to say those lines actually did work.” Felix grinned down at him, expression delighted, but filled with heat.

“Shut up,” Bryce said. The words came out as more of a huff before he reached up and pulled Felix back down into another heated kiss.

Felix ended the kiss then, pulled back and nudged Bryce forward to unlock his door. While Bryce was busy, Felix slid up behind him and dropped nipping kisses on the side of his neck. Bryce shivered and fumbled with his key as Felix chuckled, low and warm, behind him until he finally managed to get the door open.

He gestured for Felix to wait on the porch for a second as he slipped inside. He petted Snarl, reminded himself to introduce the two of them later, and then let the dog out into the fenced in yard. Felix waited for him underneath the light of the front porch. When Bryce got back, he noticed the way Felix looked, hair disheveled and mouth slightly swollen. Bryce couldn’t pull him forward into the house and another kiss fast enough.

They were noticeably wilder then. Their hands roamed over each other as Felix closed the door with his foot, and crowded Bryce against the nearest wall. Felix tugged at Bryce’s shirt until it slipped out of his waistband, and wasted no time in getting his hands on Bryce’s skin. He traced his way across Bryce’s stomach and up his chest. Felix raked Bryce’s nipples with his nails. Bryce gasped and bucked his hips up as he broke the kiss. His cock pressed against his zipper painfully as he panted up at Felix.

“Bedroom.” Bryce practically rasped the word out. He groaned low and deep in his throat when Felix’s mouthed at his neck, his tongue skating along his skin before he nipped him sharply.

Bryce pulled Felix’s shirt completely off then tugged at the fly of his pants as they stumbled towards his bedroom. Felix’s hands were just as busy, and by the time they managed to get to Bryce’s room, their shoes and socks were abandoned somewhere behind them. They stood at the end of his bed, panting, and stared at each other for a moment, and then Felix moved. He pushed Bryce, who fell back against the mattress, legs splayed and pants riding low on his hips.

Bryce didn’t get the chance to go clubbing and let loose very often and he genuinely missed having fun. But money was tight and he needed all the extra hours he could get. When his best friend insisted though, Bryce found himself unable to refuse. Seduced out on the dance floor by a handsome stranger, Bryce found himself unexpectedly at a loss when Felix Cranshaw left him with a business card and feeling of unfulfilment. Not one to indulge in a one night stand, Bryce lets the opportunity pass him by and quickly gets back to his regular life. A new job – one that brings him back into Felix’s orbit – sets him back onto the path of the one who got away. I really enjoyed this short story. With two interesting main characters that instantly drew me in and a smoking hot opening scene I found this to be a refreshingly different read. Bryce doesn’t just jump into bed with Felix – though he’s sorely tempted to. The chemistry between the two men is smoking hot, but far better than that was the descriptions of their first few interactions. The depth the author placed on their connection and the starts of their relationship was something I often miss in short stories and I thought was exceedingly well written. While a wham, bam thank you ma’am style quickie is always alluring, all too often it leaves me wondering how the main characters could really go on from there. As Bryce and Felix interact and the chemistry smolders between them, their attraction to each other and deepening feelings left me as a reader in no doubt that theirs was a far more solid relationship. Not just a passing fancy. I would have really loved if the story had been a bit longer, maybe taking Bryce and Felix through that final scene or with one more. I feel it would have rounded out the story just that little bit more, but am unsure if there was a word limit or something similar that restricted the author. Apart from that mild complaint this is a lovely story, full of cheesy pick-up lines, good humour, and what I thought was a solid, realistic and thoroughly enjoyable connection between two men. There isn’t anything too outwardly kinky or offensive and I thought the sex was hot, tasteful and really well written. I’d recommend this to friends who are interested in reading M/M but don’t want to push the envelope too far. There is only the one sex scene – so those who like more action might be left a little wanting in that sense, but personally I feel that the strength of the connection between Bryce and Felix, and the interactions between them as they get to know each other makes this a more fulfilling story than instant sex and copious scenes of that would have given. A refreshing story that left me with a big grin and a curiosity to read more by this author.